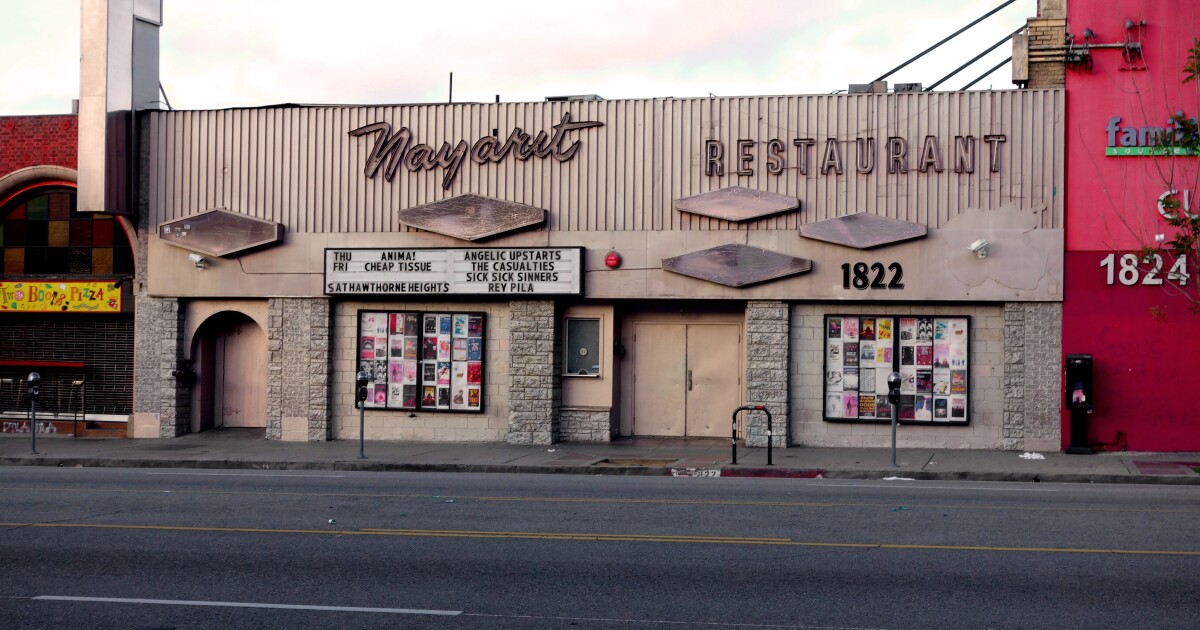 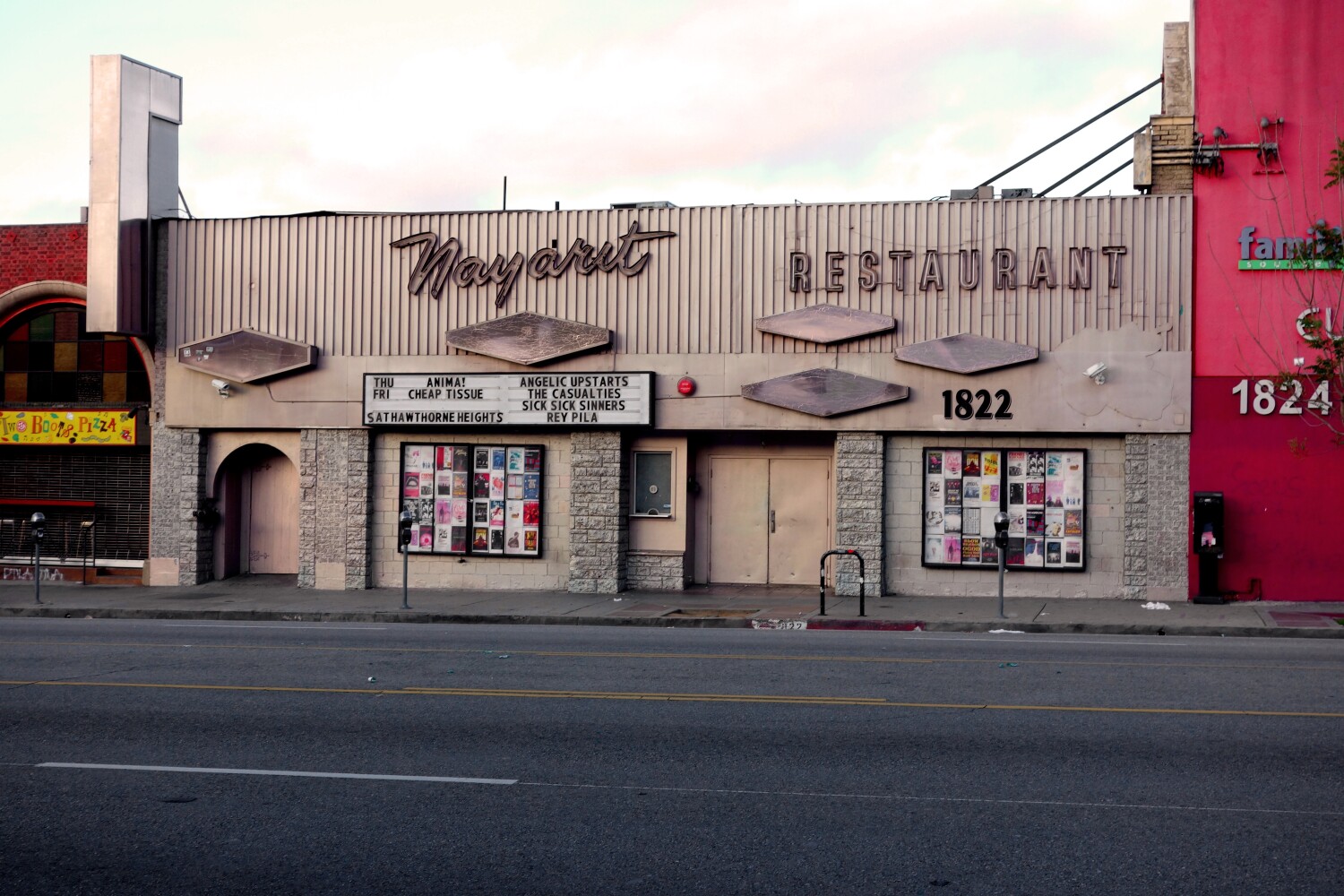 Stand in front of 1822 Sunset Blvd., and you’ll see the old sign for the Nayarit restaurant, but where a banner below used to proclaim “authentic Mexican dining,” there’s a marquee advertising upcoming shows at the Echo nightclub. It’s a typical L.A. palimpsest — one history layered over traces of another — and the earlier one is worth knowing.

For more than 20 years beginning in 1951, the Nayarit helped define Echo Park. It provided work opportunities for well over 100 people, served delicious, authentic Mexican food, and fostered a diverse community of Latinx immigrants and others who met and mixed in the restaurant’s dining room, open 10 a.m. ’til 4 a.m, seven days a week.

The Nayarit was the creation of my grandmother, Doña Natalia Barraza. My mother, María, was her right-hand assistant in the business. I never knew Doña Natalia, but I grew up with my brother in the house that she was able to purchase, a member of a community she helped forge, and I was buoyed by the success of what she built over her 48 years in the United States. Doña Natalia came to Los Angeles in 1921 and went on to open three restaurants, but the Echo Park Nayarit was the largest and the most long-lived. Well after Barraza died, even after my mother gave up the restaurant lease, it anchored our life in L.A.

As a historian, I know the Nayarit did a lot more than launch my family in the U.S. It’s a prime piece of what I call under-documented Los Angeles — overlooked places, people and events that nonetheless make the city what it is.

Doña Natalia’s restaurant had an enormous ripple effect. It offered newcomers a leg up and a taste of home away from home. Its wide-ranging customers helped chip away at racism in the city. And it was a force multiplier when it came to creating opportunities for immigrants to seize for themselves and their communities.

Natalia Barraza came to the United States on her own, on the heels of the Mexican Revolution. She could not write, read, or speak English, but she would later sponsor dozens of immigrants — many of them single and divorced women and gay men — helping them settle, giving them jobs and places to stay, and encouraging them to stake a claim in L.A. With her support — and seed money, sometimes — former Nayarit employees went on to open their own restaurants nearby, including El Batey market, Barragan’s, La Villa Taxco, El Conquistador and El Chavo.

Though Mexicans were legally classiﬁed as white, they were subject to considerable everyday racism, as well as de facto and de jure segregation at schools and public facilities. L.A.’s dominant culture treated them like outsiders, but at the Nayarit, they were insiders.

They could speak their native tongue at the restaurant, be waited on by fellow nationals and escape whatever prejudice they might face in the city as a whole. Immigrants might not feel any more American at the Nayarit (nor was that necessarily their goal), but it provided them with the familiarity of home, a readymade social network, a place to be visible, to belong.

What Doña Natalia put on her menus wasn’t typical California-style mid-century Mexican food. She made some concessions to American ingredients and tastes, but she refused to whitewash her cooking for Anglo American palates. As best she was able with the available ingredients, she offered authentically regional cuisine.

Back home in Acaponeta, for example, cooks make gorditas — a thick pocket of fried masa stuﬀed with ingredients and bathed in a light tomato sauce made from chicken broth, fresh tomato and a little garlic. Gorditas were not on the Nayarit menu — Doña Natalia opted for tacos, which could be quickly assembled with stacks of tortillas at the ready, but she topped her tacos with the same Nayarit-style tomato-based sauce.

Insisting on details like that in a restaurant outside an ethnic enclave was a political act. It was also central to the Nayarit’s success, implicitly declaring its character.

And scrappy Echo Park welcomed it. With relatively cheap rents and a bohemian vibe, the downtown suburb had long been a cultural crossroads — a haven for gays, liberal whites and an abundance of working-class immigrants of many nationalities.

In 1951, Echo Park was 79% white, 16% Latinx and the rest mostly Filipino. (By 1970, it would be 52% Latinx.) It had been redlined — too many “foreign” and “racial elements” meant white bankers considered it a bad investment, which only cemented its outsider character (which ironically attracted gentrification years later). There’s no record of why Doña Natalia chose Echo Park in 1921. My guess is affordability and the nature of the neighborhood, where her restaurant would become both a fixture and a draw.

In addition to its Echo Park regulars, the Nayarit’s clientele included movie stars, athletes, singers and musicians, some Latinx (like most of the restaurant’s customers) and some not. Alexis McSweyn, whose mom was from Arizona and whose stepdad was from Mexico, grew up in Echo Park in the 1950s. She told me in an interview that she was always shocked if anyone from the neighborhood hadn’t been to the restaurant. “The Nayarit was Echo Park,” she said.

Doña Natalia died in 1969, two years before I was born. My mother ran the business for a few more years, but sold the lease in 1976 to new owners who kept the old name. Their restaurant closed in 2001, and the Echo nightclub opened the same year — not the same type of scene, but still a place where people gather together, with shared appreciation for something they value.

Echo Park still welcomes outsiders. But gentrification — or more precisely, wealthification — has been well underway for two decades. The diversity and authenticity that places like the Nayarit cultivated make the neighborhood attractive to its monied newcomers, yet that legacy and those who built it are often the most threatened by the change.

It used to be that I could walk from my childhood home to a Dodger game, passing one business after another whose owners or workers directly owed something to the success of the Nayarit. Those places are gone now, though those people are still friends and family to me.

And Doña Natalia’s impact persists. The storefront on Sunset is one testament to what she built. So are the fates and fortunes of the men and women who worked and gathered there. Their stories are now two, three and four generations deep in Los Angeles, and tethered to a place called the Nayarit.

Natalia Molina is a professor of American studies at USC. Her latest book is “A Place at the Nayarit: How a Mexican Restaurant Nourished a Community.”