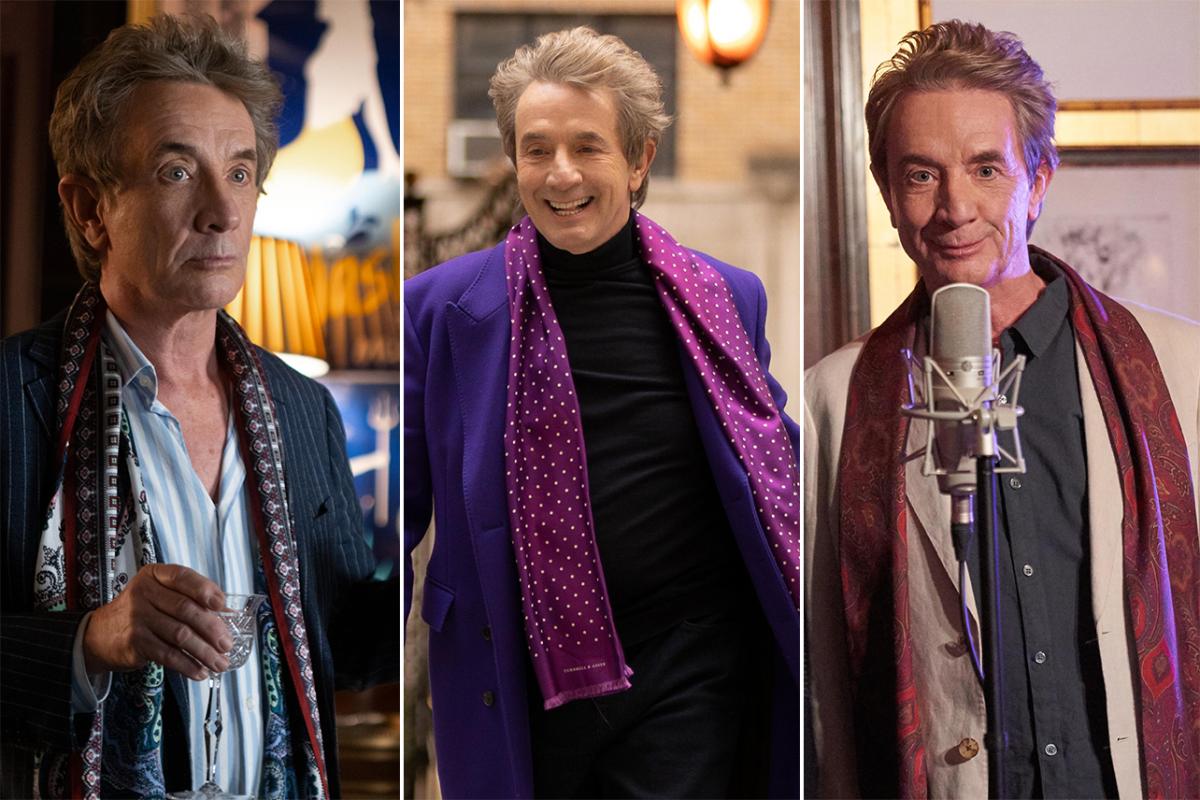 Hulu’s Only Murders in the Building is back, and its fashion remains fabulous.

It’s no mystery that Only Murders dazzles viewers episode after episode with a warm, bold, classic fall wardrobe masterfully assembled by costume designer Dana Covarrubias. Part of what makes the show so aesthetically compelling is that each character has their own distinct personal style. Mabel stole the show in Season 1 with her assortment of cozy sweaters, stunning coats, super cute mini skirts, and pops of marigold. But in Season 2, it’s time we celebrate the power and pizazz that radiates from Oliver Putnam’s ensembles.

As a tribute to his broadway director roots, Oliver’s wardrobe is full of jewel tones, luxurious coats, fashionable vests, and perhaps most importantly, a seemingly never-ending supply of colorful, bold, pattern-heavy statement scarves. In hopes of helping Oliver’s stylish scarves get their much-deserved standing ovation this season, we reached out to Covarrubias to learn about her wardrobe inspiration for the show, her favorite Oliver fashion moment, and where the heck he gets his scarves.

When creating a mood board ahead of her Only Murders interview, Covarrubias took a lot inspiration for character wardrobes from the streets of New York, the actors’ personal styles, and largely, the script.

“There was that very, very clear moment where Oliver almost gets hit by a taxi in Episode 1. And he says, ‘Do you not see this coat?’ And I was like, ‘Oh, this guy is my kind of guy — like a clotheshorse — so it’s gotta be a good coat, obviously,” Covarrubias explained during a phone call with Decider. “That kind of informed the whole character. And the whole thing about him being in debt [while also] being an extravagant human. He likes to spend, and likes to impress, and likes to charm.”

Covarrubias isn’t a painter, but she equates creating Martin Short’s costumes to an artist bringing color to a canvas. “He has a very specific color palette, then within that color palette we have amazing different patterns — stripes and paisleys and textures — and we have beautiful, bright, deep colors,” she said. “It’s just so fun to go to his rack and create a really interesting mixed pattern look, and then the scarf is always the cherry on the cake. It’s always the thing that really pulls it all together.”

From the first moment Short’s character steps on screen in the aforementioned electric eggplant purple coat and a shockingly bright polka dot silk scarf — an outfit he believes was Oliver’s attempt at dressing like Timotheé Chalamet — it’s clear his scarves both elevate his looks and perfectly capture his performance-longing, drama-loving personality.

“The scarves also add a lot of movement to Oliver’s costume, which is great because he gestures so much and he’s such a big personality, so the scarf just kind of flies around with him,” Covarrubias said. “It’s just great. It’s so funny.”

So where does Oliver get his stand-out neck accessories? An online luxury consignment shop called TheRealReal.

“We don’t really make the scarves ourselves, but we take existing ones and create what we want from them,” Covarrubias laughed. “I’ve mostly found the ones that I love from TheRealReal. It’s so good and it’s all high end secondhand stuff, so you can get some really, really nice pieces for a fraction of the cost, which is great for us in television, because we don’t always have the biggest budgets, but we want everyone to look fabulous.”

To make sure the scarves fit Short’s frame, Covarrubias and team usually cut them in half lengthwise to thin them out. “All the scarves are so wide, and on camera they would kind of swallow him whole, so we do a lot of alterations to existing scarves,” she said, adding that they’ll occasionally go so far as to make three scarves out of one.

While Covarrubias promises one of the show’s most exciting costume elements is still to come in the Season 2 finale, a favorite Oliver wardrobe moment of hers is at the top of Season 2, Episode 3. “It’s this beautiful white and blue striped men’s tailored shit, then a blue vest, and a scarf that’s a blue, sort of really nice gauzy texture with really interesting weight and a white paisley pattern,” she said. “That was one of my favorites, but it’s hard. It’s like choosing from all your favorite babies. They’re all so delicious.”

The Only Murders wardrobe sort of has to be cozy, since the show is set in colder months. But because one of the big inspirations for Oliver’s style was “all of those really fabulous Italian men you see on TheSartorialist.com” — the ones riding mopeds with linen shirts and tiny scarves around their necks — Covarrubias definitely thinks Oliver would rock a Summer Scarf if he ever gets the opportunity.

Covarrubias shared that the biggest change between Season 1 and Season 2’s wardrobes is the fact that the characters are starting to mirror each other’s signature styles and colors. So here’s hoping we see Mabel, Charles, and Oliver all sporting his famous scarves together soon.