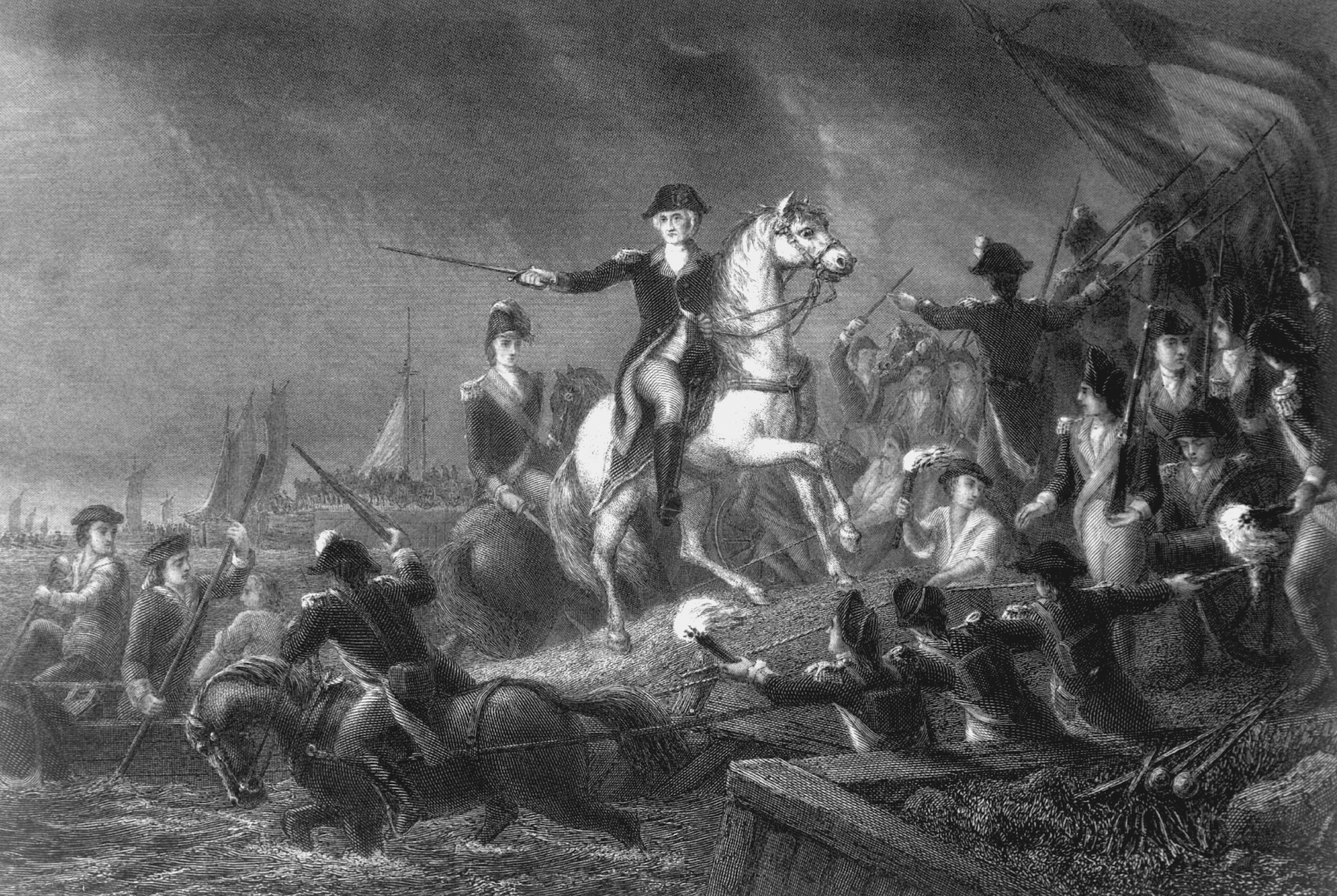 The British army and navy, in a stunning display of global force projection and military logistics, invaded Brooklyn by sea and launched the defeat of George Washington’s army in New York City on this day in history, August 22, 1776.

“A naval spectacle of more than 90 vessels filled the Narrows [of New York Harbor],” wrote the late historian David McCullough in the book “1776,” his seminal work of the most formative year in the nation’s history.

The British during the American Revolution had occupied New York Harbor with a force of some 400 ships stationed off Staten Island earlier in the summer.

ON THIS DAY IN HISTORY, AUGUST 10, 1776, DECLARATION OF IINDEPENDENCE REACHES LONDON

“Wave after wave of soldiers came on, their red coats and polished bayonets gleaming in the bright sunshine,” McCullough wrote of the landing at Gravesend Bay, in what’s now the southeastern corner of Brooklyn, just south of today’s Verrazano Narrows Bridge.

Battle of Long Island — Retreat of the Americans under General Stirling Across Gowanus Creek (1877). The battle (also known as the Battle of Brooklyn Heights) was fought on August 27, 1776, the first major battle of the American Revolutionary War to take place after the U.S. declared its independence on July 4, 1776. Engraving after a painting made in 1858 by Alonzo Chappel; from “Our Country: a Household History for All Readers, from the Discovery of America to the Present Time,” Volume 2, by Benson J. Lossing (Johnson and Miles, New York, 1877).
(Artist Unknown. (Photo by The Print Collector/Getty Images))

“By noon a fully equipped Army of 15,000 men and 40 pieces of artillery had landed and rapidly, smoothly assembled in perfect formation on the adjacent plain.”

The general then led the miraculous evacuation of his remaining troops under the cover and darkness and fog across the East River to Manhattan on August 29.

The Americans were forced to flee Manhattan, too, in November, leaving the city in control of the British for the entirety of the war.

The colonial troops were repeatedly overwhelmed in 1776 and the failed end of the American Revolution seemed imminent.

Yet British soldiers, agents of the world’s most powerful empire, were stunned by the wealth of the rebellious American people, their fields and farmhouses.

Illustration of General George Washington directing the retreat of the Continental Army across the East River, from Brooklyn to Manhattan, after their defeat at the hands of British forces during the battle of Long Island, August 29, 1776. Engraving by JC Armytage from a painting by Wageman.
(Interim Archives/Getty Images)

The redcoats “regaled themselves with the fine apples, which hung everywhere upon the trees in great abundance,” wrote McCullough.

ON THIS DAY IN HISTORY, AUGUST 19, 1812, OLD IRONSIDES LEGEND BORN IN SMASHING VICTORY OVER ROYAL NAVY

“Almost everywhere there were chests of drawers, chairs, mirrors with gold-gilded frames, porcelain and all sorts of items of the best and most expensive manufacture.”

He also wrote, “The British and Hessian troops alike were astonished to find Americans blessed with such abundance.”

“The lightning fell in masses and sheets of fire to the earth, and seemed to strike incessantly on every side.”

The year 1776 is remembered reverently today by patriotic Americans.

The invasion of Brooklyn, though, marked the beginning of the darkest months of the American Revolution.

Mother Nature foretold of the August 22 invasion the day before with “a storm as vicious as any in living memory,” McCullough wrote.

“The lightning fell in masses and sheets of fire to the earth, and seemed to strike incessantly on every side … Houses burst into flames. Ten soldiers camped by the East River were killed in a single flash.”

“A night so violent seemed filled with portent,” he also wrote.