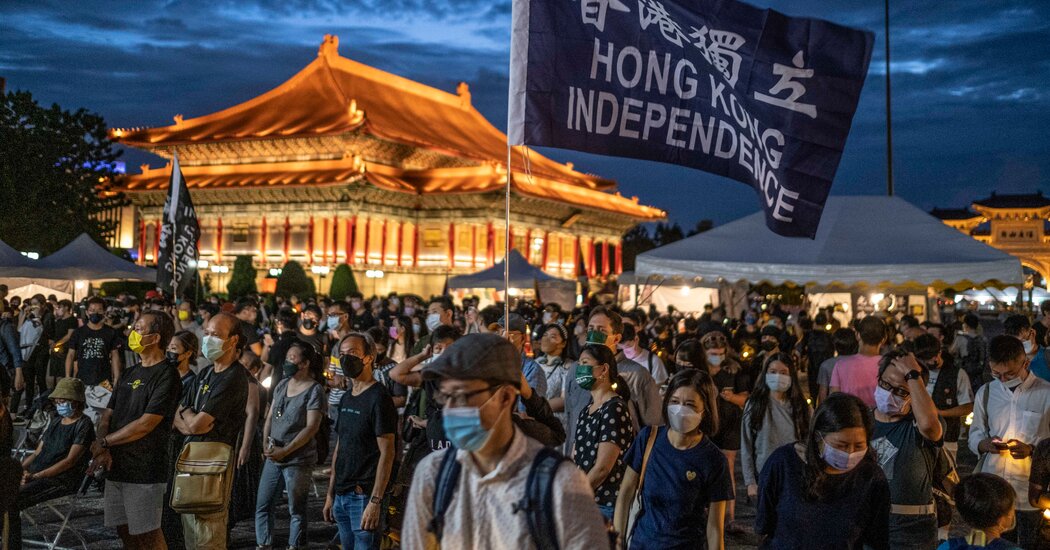 TAIPEI, Taiwan — For decades, a large candlelight vigil was held in Hong Kong each June 4, to commemorate those killed when Chinese soldiers crushed the Tiananmen Square protests in Beijing.

On Saturday, smaller crowds gathered in Taipei and other cities around the world — this time mourning not just the people slain 33 years ago, but also the fate of Hong Kong, where the smothering of dissent has put an end to the vigil in Victoria Park, the world’s most prominent public memorial to the victims of 1989.

“Now it’s about the two things together — Hong Kong as well as what happened on June 4,” said Francis Tse, a former Hong Kong resident who was one of about 400 people commemorating the anniversary in downtown Sydney, Australia. He and many others carried signs calling for the release of activists imprisoned in Hong Kong.

“We don’t have the chance to go to Victoria Park anymore,” Mr. Tse said, “but now there are many Victoria Parks like this across the world.”

Since 2020, when Beijing imposed a sweeping national security law on Hong Kong, the local government has essentially banned public commemorations of the 1989 killings, which wiped out a student-led protest movement calling for democratic change in China. Taipei — the capital of Taiwan, which has resisted China’s claims of sovereignty for decades — has since emerged as the new center for remembrance of the massacre.

On Saturday, people who joined commemorations in Taipei, Sydney and London said they had also come to denounce the erasure of political freedoms in Hong Kong, as well as China’s draconian policies in two other regions, Xinjiang and Tibet.

“Now Hong Kong can no longer tell the truth and the real history, we must pass on this history even more in Taiwan,” said Henry Tong, a 41-year-old from Hong Kong who moved to Taiwan last year and attended this year’s vigil in Taipei. “Because of Hong Kong’s prohibition and suppression, it has blossomed everywhere.”

In London, protesters held signs with slogans like “Democracy Now!” in front of China’s Embassy and brought a cardboard replica of a military tank, an image indelibly associated with the crackdown 33 years ago. Lawmakers and activists who had fled to Britain from Hong Kong were lined up to speak.

Sam Lee, 28, who migrated to Britain from Hong Kong two months ago, said that anyone who joined such a rally in Hong Kong would be “arrested — immediately.” Even in Britain, he said, he was afraid of the Chinese government’s reach.

Mr. Lee was unsure whether he would ever return to Hong Kong. “I am doing what they can’t do right now,” he said. “This is our responsibility.”

By dusk in Taipei, hundreds of people had gathered in the city center, placing electric candles on a banner showing the date of June 4, 1989. People conversing in Cantonese — the language of Hong Kong — were numerous. Organizers in Taipei also screened a film, banned in Hong Kong, about the pro-democracy protests that swept the city in 2019, before the authorities used the security law to stamp them out.

“Though the city of Hong Kong fell, we didn’t fall for nothing,” said Kacey Wong, an artist from Hong Kong whose work was featured in an exhibition held alongside the Taipei vigil. He said the protest movement of 2019 had “served its purpose: to warn other nations to take cautions against the Chinese Communist Party.”

In 1989, many Hong Kongers were galvanized by the pro-democracy protests in mainland China — which centered on Tiananmen Square but spread across the country — creating a political crisis for the ruling Communist Party.

Troops started flooding into Beijing on the evening of June 3. They shot dead hundreds, some say thousands, of people before reaching the square and clearing it. Killings and bloody standoffs with protesters also erupted in other Chinese cities.

Hong Kong’s vigil, the only major memorial for the victims on Chinese soil, was long seen as proof that civil rights had been preserved in the former British colony since its return to China in 1997. Every year, tens of thousands gathered to light candles and hear speeches by local pro-democracy figures, Tiananmen activists and relatives of those killed in 1989.

Such assemblies are now unthinkable. Since the 2019 protests, the city government has carried out a comprehensive campaign against dissent, empowered by the new security law. It banned the June 4 vigil in 2020 (though many defied the ban) and again last year, citing Covid-19 social distancing restrictions.

Prominent activists who gathered anyway, or tried to, were jailed under illegal assembly laws. The vigil’s organizer, the Hong Kong Alliance in Support of Patriotic Democratic Movements of China, disbanded last year.

“There’s this blending happening of the Hong Kong story and the Beijing story,” said Jeffrey N. Wasserstrom, a historian of modern China at the University of California Irvine and the author of “Vigil,” a study of the clampdown in Hong Kong.

“Hong Kong was where you kept alive the memory of what had happened in Beijing in 1989. But now June 4 is also keeping attention back on Hong Kong at a time when the world’s moving on from that,” he said. “It’s also becoming the commemoration of the Hong Kong commemoration.”

This year, too, the Hong Kong government has seemed determined to prevent any public Tiananmen memorial. Outdoor public gatherings continue to be limited to four people under coronavirus pandemic measures. Carrie Lam, Hong Kong’s chief executive, warned that any such gathering would be subject to both the security law and social distancing restrictions.

The authorities closed much of Victoria Park, and the police warned that anyone who tried to meet there could face unauthorized assembly charges.

Local leaders of the Catholic Church said memorial masses would not be held on Saturday, for fear of violating the security law. “Just praying for the deceased in private or in small groups will also be very meaningful,” the Catholic Diocese of Hong Kong said.

Lee Cheuk-yan, a former leader of the Hong Kong Alliance who is now in prison for illegal assembly, planned to fast on Saturday and light matches in the evening to remember those killed in 1989, he said in a written interview with the Ming Pao newspaper.

Over the past year, universities in Hong Kong have removed prominent Tiananmen memorials. In December, the University of Hong Kong took down the “Pillar of Shame,” a 26-foot statue by the Danish artist Jens Galschiot. A depiction of writhing corpses signifying those killed in 1989, it had been at the campus since the late 1990s, becoming a symbol of defiance against the Chinese authorities.

Since its removal, Prague and other cities have hosted replicas of the statue, and a smaller version was unveiled in Taipei on Saturday.

Another statue — modeled after the “Goddess of Democracy” erected by students in Tiananmen Square in 1989 — was removed from the Chinese University of Hong Kong campus late last year. In recent days, anonymous activists, determined to commemorate June 4 however they can, have left four-inch replicas of it around the campus.