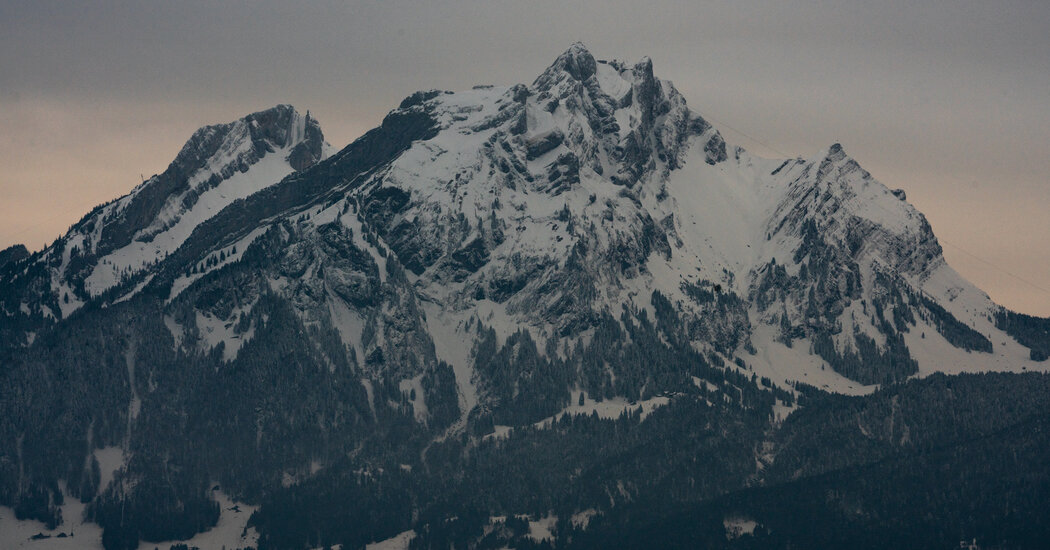 MOUNT PILATUS CONSISTS of a range of mountains overlooking Lucerne and the neighboring lake of the same name. At its peak, it measures close to 7,000 feet: Rocky terrain and tall fir trees give way to lush valleys punctuated by gardens, wooden houses and grazing sheep. It is a regal and imposing range, part of the Swiss Alps, but overshadowed by other, more spectacular, peaks and lake views. It might not be the most obvious choice, but its allure lies in the myths and stories that surround its history, a bloody past filled with fire-breathing dragons and the bones of Pontius Pilate, the Roman governor who presided over the trial of Jesus Christ. Legend has it that after he committed suicide, the Romans tried to dispose of his corpse in a series of rivers. Storms overtook each river they chose, continuing until they fished the body out. Desperate, they found an isolated mountain in a distant forest in Switzerland and buried him there, where his anguished spirit rises every year on Good Friday in a futile effort to clean his bloodied hands.

There is nothing tranquil about the history of Mount Pilatus. Even its former Latin name, Fractus Mons, “broken mountain,” hints at violence and decay. Swiss lore tells of terrifying thunderstorms and churning lake waters, of phantoms screeching through the air. Brochures marketing Mount Pilatus detail helpless cattle lifted into the sky and, for centuries, residents exchanged accounts of uprooted trees and flooding so heavy that the government of Lucerne forbade anyone from climbing the mountain. Pilatus was a fearsome place, prone to otherworldly storms, and spirits were the only way to explain what defied logic. Demons and monsters helped reframe the world for Lucerne’s residents. They broadened the possibilities of what could happen, when so much that was visible and concrete already tested the bounds of the villagers’ credulity: illnesses and sudden deaths, unexplained crop failures and livestock diseases, floods and storms. Those legends made what was disastrous seem quotidian, unremarkable. They made it bearable.

Today, these myths are merely a point of interest, a marketing angle to help distinguish Mount Pilatus from all the other scenic sites in Switzerland. The very real terrors that might have once existed have been replaced by curiosity and a condescending nod to the gullibility of unsophisticated people born in a different era. The stories are simply reflective of naïve superstitions and overdeveloped imaginations. Surely the same anxieties no longer exist.

Perhaps my mother had a private fear of her own she was hoping to overcome when she started her journey to Mount Pilatus. The place called to her in a way she could not explain, and woven into her many retellings of that trip was her palpable pride in having done it alone. After that trip, she was determined to take me.