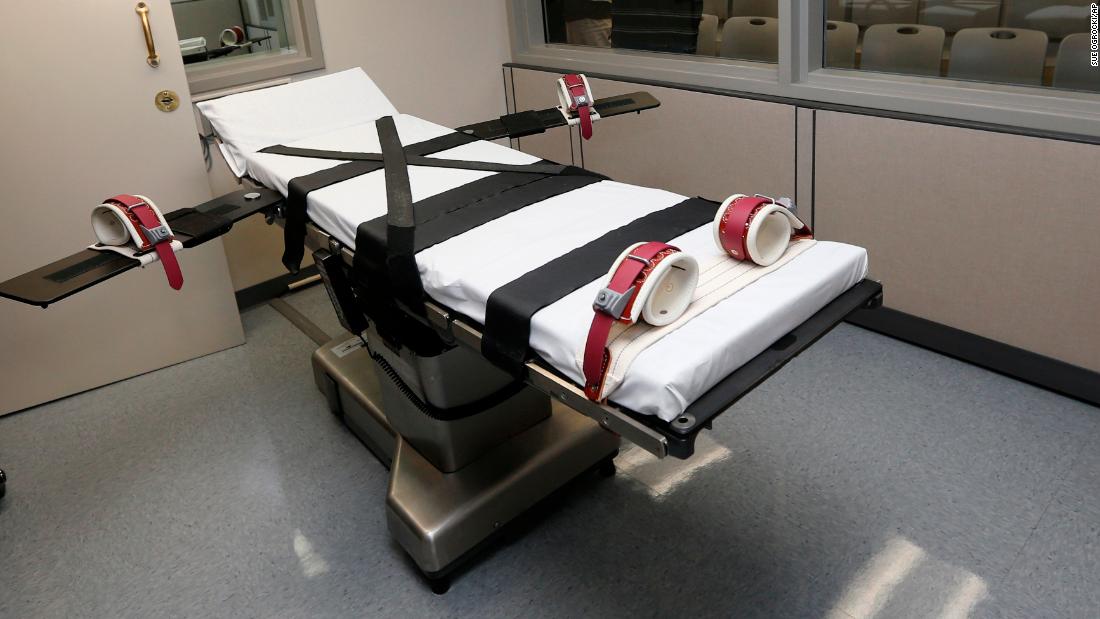 “It’s just yet one more reckless move by Oklahoma,” Deborah Denno, a Fordham University law professor, told CNN of the state’s scheduled execution timetable, which she said is in line with its staunch, decadeslong record of capital punishment. “If there was going to be any state that was going to do something so obviously irresponsible and unjust … it would be the state of Oklahoma, given the history.”

“The family members of these loved ones have waited decades for justice,” Oklahoma Attorney General John O’Connor said, referring to the families of the condemned men’s victims, in a July 1 statement as the executions dates were set. “They are courageous and inspiring in their continued expressions of love for the ones they lost.

“My office stands beside them as they take this next step in the journey that the murderers forced upon them,” he said.

“Oklahomans overwhelmingly voted in 2016 to preserve the death penalty as a consequence for the most heinous murders,” the attorney general said. “I’m certain that justice and safety for all of us drove that vote.”

Oklahoma’s proposed series of executions follows similar sprees in Arkansas in 2017 and by the US government under the Trump administration. But experts say these undertakings are anomalies, standing in contrast to the continued decline of the death penalty in America in recent years.
Oklahoma’s execution docket is a particularly troubling prospect, given the state’s “recent history with capital punishment has been characterized by botched executions,” according to Death Penalty Information Center. While those can be cases in which an inmate suffers inordinately, experts use “botched” to describe any execution that deviates from officials’ prescribed protocol for a given method — what Austin Sarat, author of “Lethal Injection and the False Promise of Humane Execution,” said might be called “standard operating procedure.”

And carrying out a series of death sentences in quick succession could raise the chances of a botched execution, experts said.

“When a state or the federal government makes a commitment to execute people in bulk, to do it over a period of time in a way that doesn’t give it a lot of time to adjust to errors and problems, that political momentum is often hard to resist,” Sarat told CNN. It can encourage “a kind of carelessness … and Oklahoma is not a national model of scrupulousness in the world of lethal injection.”

In 2014, Oklahoma death row inmate Clayton Lockett writhed and moaned during his execution by lethal injection for 43 minutes before suffering a heart attack. Months later, witnesses reported Charles Warner said, “My body is on fire,” as he was put to death in the state. And last October, after a yearslong moratorium on the state’s death penalty spurred in part by the Warner case, John Grant convulsed and vomited on the gurney, per witnesses.

“I think that the problems that were present when Lockett was executed remain present in Oklahoma today,” said Sarat, a professor of law and politics at Amherst College. “And the Grant execution is a testimony to that fact.”

Pointing to Lockett’s and Warner’s executions, a number of the inmates now slated for execution sued corrections officials in federal court, claiming in part that Oklahoma’s three-drug lethal injection protocol was unconstitutional. Midazolam, one of the drugs used in the protocol, would not render them adequately unconscious, they argued in part, and could put them at risk of severe pain as they died, violating their Eighth Amendment protection against “cruel and unusual punishments.”

But the judge ruled in June against the inmates, citing the US Supreme Court’s ruling in Bucklew v. Precythe, in which Justice Neil Gorsuch wrote the Eighth Amendment “does not guarantee a prisoner a painless death.”

The inmates’ attorneys responded with claims the judge had ignored “the overwhelming evidence presented at trial that Oklahoma’s execution protocol … creates an unacceptable risk that prisoners will experience severe pain and suffering.”

A history of troubled executions

Like most states, Oklahoma primarily uses lethal injection to carry out its executions. But today, the “very meaning of ‘lethal injection,’ or the thing that it designates, is now hard to specify from state to state,” said Sarat.
Across the country, “lethal injection” used to refer to a three-drug procedure: The first drug would put the prisoner to sleep, rendering him unconscious. The second caused paralysis, and the third would stop the heart. But about a decade ago, states began struggling to obtain the drugs they needed, after a US manufacturer stopped making the drug and European companies began withholding the chemicals so they wouldn’t be used in these procedures.

As a result, states have scrambled to find alternatives they can reliably obtain, resulting in what Denno described as a “constant experimentation with drugs.”

Midazolam has been used as the first drug in several states’ fatal three-drug cocktails, even as critics long have argued it is a sedative — not a painkilling anesthetic — and can leave an inmate suffering immense pain during the execution, even if they look peaceful. Still, the US Supreme Court has upheld its use.
Oklahoma’s recent troubling incidents date to Lockett’s 2014 execution — the first time the state used midazolam as the first of its three-drug cocktail. The execution began with officials struggling for 51 minutes to place an IV line on his body to deliver the fatal drugs before placing the line in Lockett’s groin. The inmate then writhed and moaned on the gurney for 43 minutes before officials called off the execution. Lockett died anyway after he suffered a heart attack.
Then-Gov. Mary Fallin, a Republican, halted executions while the state investigated what went wrong, and the state Department of Public Safety ultimately said the complications with the placement of the IV played a significant role in the execution’s problems.

Warner was executed the following January. But months later, officials aborted an attempt to execute Glossip after they procured the wrong drug for his execution: potassium acetate instead of potassium chloride, the drug used to stop an inmate’s heart approved by the state’s protocol. Then it emerged officials had, in fact, used that drug to put Warner to death.

Fallin again halted executions and a grand jury again reviewed the execution protocol and recommended protocol revisions. Then, a bipartisan state commission recommended in 2017 the state extend the moratorium until it implemented “significant reforms,” including dozens of recommendations from a 294-page report that addressed everything from the drugs used to inmates’ innocence claims.
The state announced in 2020 it would resume executions, saying it had found a “reliable supply” of drugs and would use a revised protocol that included recommendations by the grand jury. That protocol still called for the use of midazolam.
But “virtually none” of the commission’s recommendations have been implemented, its cochairs, former Democratic Gov. Brad Henry and former magistrate judge Andy Lester, wrote last month in an op-ed for The Oklahoman. “Yet the state is barreling ahead,” they wrote, “with an unprecedented number of executions despite the numerous flaws in the implementation of the death penalty.”

‘Oklahoma is swimming upstream against the tide’

These issues and risks are not limited to Oklahoma: The execution just last month of Joe Nathan James in Alabama, for instance, has drawn wide scrutiny after a three-hour delay and a report in The Atlantic that he suffered. Indeed, between 1890 and 2010, 3% of all American executions were botched, with lethal injection showing the highest rate of any method at 7%, according to Sarat. Since 2010, the overall rate of botched executions has increased, he said, rising to 8% — and as high as 20% in executions in which a sedative, like midazolam, was used.
Oklahoma also is not the first jurisdiction in recent years to attempt a lengthy series of executions: In 2017, Arkansas moved to execute eight men in 11 days, though it ended up executing four. And the federal government after a nearly two-decade hiatus executed 13 inmates under the Trump administration between July 2020 and January 2021.
These sprees, though, are “anomalies,” said Sarat. The US is in a “period of a national reconsideration of capital punishment,” he said, as evidenced by declines in numbers of death sentences and executions and the growing number of states that have abolished the death penalty.

But Oklahoma’s insistence on carrying out these executions reflects the stance it’s held toward the death penalty for decades, Denno said. It was the first state in the country and the first jurisdiction in the world to adopt lethal injection as its preferred execution method in 1977, developing a protocol soon adopted by states including Texas, which carried out the first execution by lethal injection in 1982.
It was also among the first to switch to midazolam, Denno said, when states began having problems obtaining drugs. And Oklahoma was the first state to allow nitrogen hypoxia as a potential method of execution — one that has never been used.

Taken together, Oklahoma is a “state that will do anything to keep executions going, including trying to execute 25 people between August of 2022 and December of 2024,” she said. “It’s just one more chip in a state that stands out, perversely, really, in its efforts to engage in reckless adoptions” of execution methods and drugs.

“There’s no question” that an execution spree would “enormously increase the risk” of a botched execution, Denno said. “How could they ever improve upon that with this many executions? It’s just going to be worse.”