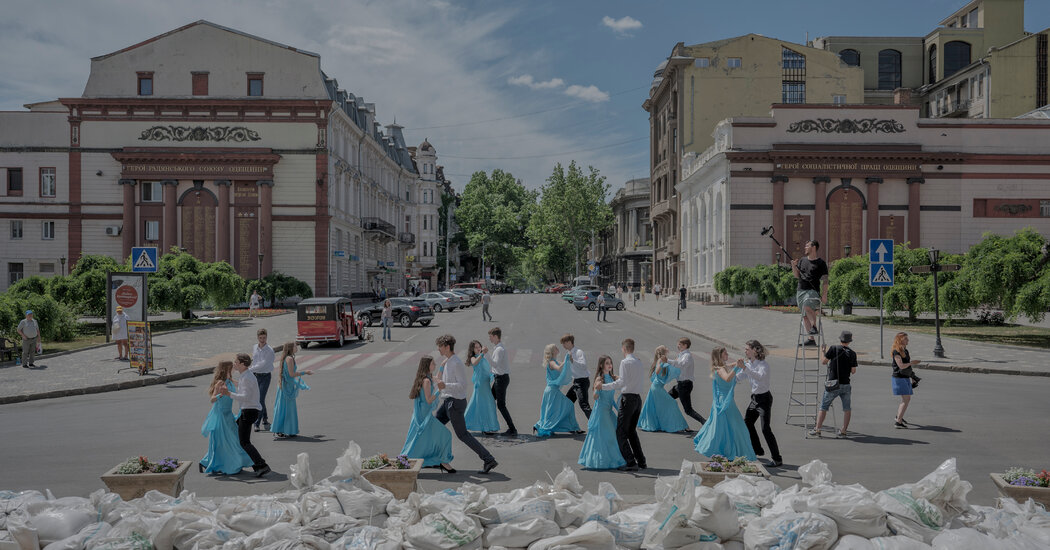 Mr. Grudev, the art curator, who is Jewish, now lives in his mother’s apartment. She left for Italy at the start of the war. He moved in to look after her dog, and brought his cat. His partner, Bogdan Zinchenko, moved in with him.

They bought plane tickets to leave for Israel, where Mr. Grudev’s sister lives, on March 7, but never used them. He could not bear to leave his books or paintings. Now when sirens blare, the couple takes refuge in the bathroom.

The laundry hanging on a wrought-iron balcony opposite his mother’s apartment drove Mr. Grudev crazy. At one point he calculated that the pink shirt that caught his eye had been drying for 112 days. Before his epiphany: The laundry had been deliberately left to give the impression the apartment was still occupied and so deter thieves.

This, he reckoned, was a very Odesan ruse; laundry as protection.

Mr. Grudev, a stud in each ear, smiles. Humor is also a survival mechanism. An old joke, in a city famed for them, tells of a barber who insists on talking politics in time of Stalin’s terror. Exasperated, his client asks why. “Because your hair is easier to cut when it stands on end.”

“Putin wants to save me — a gay, Jewish, Russian-speaking man living in Odesa — from Nazis!” Mr. Grudev says. “Please.”

Roman Shvartsman, 85, is an Odesan Holocaust survivor. He lost his childhood, lived the antisemitism of the Soviet years, and had hoped for a quiet old age. Now he fears for his grandchildren.

In his pale blue eyes, one reddened by recent cataract surgery, was all of Babel’s terrible world and all of humanity’s defiant hope. “Putin says openly that there is no such state as Ukraine and that he wants to annihilate 40 million Ukrainians. How much clearer does the West need him to be?”