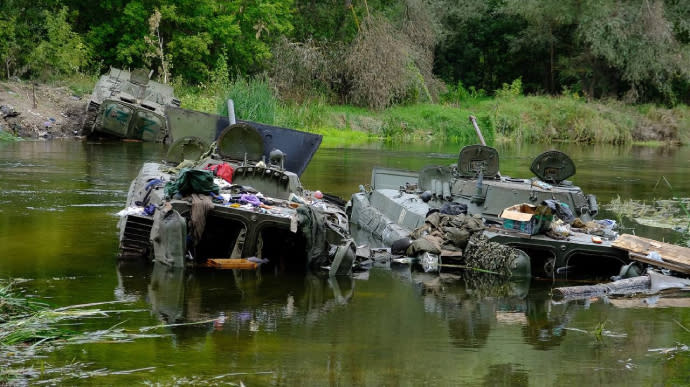 The Russians are preparing retreat routes in Kherson Oblast; in particular, near the Kakhovka Hydroelectric Power Plant (HPP), they have sunk nine wagons for the construction of a crossing.

Source: General Staff of the Armed Forces of Ukraine on Facebook, information as of 18:00 on 17 September

Quote: “Due to the successful actions of the Armed Forces of Ukraine to disable all crossings across the Dnipro on the Kherson front, the occupiers are preparing their retreat routes.

Thus, they have sunk 9 wagons near the Kakhovka HPP for the construction of a further crossing.”

Details: The General Staff also confirmed the killing of over 180 occupiers in Kherson on 10 September. The Armed Forces of Ukraine hit the building of “Alkoservis” LLC (Limited liability company), where the personnel and military equipment of the Russian occupying forces were located.

“For five days, units of the Russian National Guard and the Federal Security Service of the Russian Federation dismantled the rubble and recovered bodies of the dead, trying to hide the losses,” the report said.

In addition, according to the General Staff, in Kherson Oblast, the occupation authorities continue to force local entrepreneurs to keep accounts in Russian rubles. They further conduct weekly inspections and threaten to “nationalise”, that is, take away the business in the event of refusal to cooperate with the occupiers.

Journalists fight on their own frontline. Support Ukrainska Pravda or become our patron!