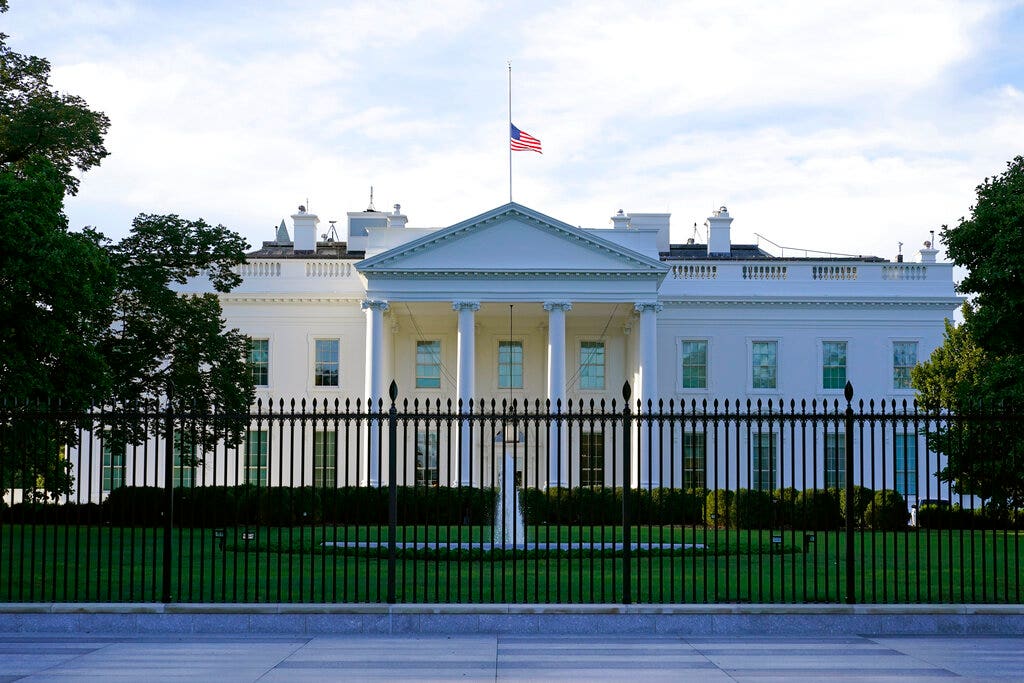 The New York Times boasted about the White House going on the offensive against GOP critics of President Biden’s massive student loan handout.

“The White House is asking congressional critics of forgiving student loans: This you?” the Times teased its report on Friday via tweet.

The Times referred to a tweet storm from the official White House account that took aim at Republican lawmakers who accepted financial relief through the Paycheck Protection Program (PPP) to keep businesses afloat as government-enforced shutdowns were implemented to combat the coronavirus pandemic.

The White House in Washington DC with a beautiful blue sky. Federal officials are seeking an 8-year prison sentence for the officer who was involved in storming the Capitol.
(Patrick Semansky)

Among the critics the White House took aim at include Rep. Marjorie Taylor Greene, who accepted $183,504 in PPP loans, Rep. Markwayne Mullin, who took $1.4 million, and Rep. Matt Gaetz, who collected $482,321.

“It was a simple formula, and one that had been employed all over social media at that point, but given the source, the tone was unusually pointed. The approach had its fans on Twitter: ‘This is the best White House trolling ever!’ one wrote,” the Times reported.

White House spokewoman Alexandra LaManna doubled down on the tweets, telling the Times, “We’ve never hesitated to call out hypocrisy, and we’re not going to stop now,” saying the critics calling the student loan program a “bailout” “had no issue with loan bailouts that benefited their own companies.”

However, as highlighted by Washington Free Beacon reporter Chuck Ross, buried in the seventh paragraph of the article is an acknowledgment by the Times that comparing the student loan handout and the PPP loan “is not perfectly equivalent.”

“The P.P.P. loans were effectively designed to be forgiven. The federal government offered them without the traditional standard of vetting for business loans in an effort to quickly distribute money to businesses that were struggling during the first years of the coronavirus pandemic. Nearly every company with 500 or fewer workers qualified for the low-interest loans, which were forgiven so long as the money went to permitted costs,” the Times wrote.

Rep. Mike Kelly, R-Pa., who was among the lawmakers the White House called out for taking nearly $1 million in PPP loans, fired back.

“A Democrat governor declared my family’s business non-essential and shut our doors. This money saved over 160 essential jobs in Western Pennsylvania during the pandemic,” Kelly tweeted Friday.

He added, “PPP loans are designed to be forgiven. Student loans are not. Big difference!”

President Biden announced on Wednesday he will cancel $10,000 of federal student loan debt for certain borrowers making less than $125,000 per year, and up to $20,000 for Pell Grant recipients, while extending the pause on federal student loan payments through the end of the year.

The price tag is a whopping $500 billion, leaving critics sounding the alarm that the spending spree will fuel inflation and further increase the country’s national debt.

Joseph A. Wulfsohn is a media reporter for Fox News Digital. Story tips can be sent to [email protected] and on Twitter: @JosephWulfsohn.