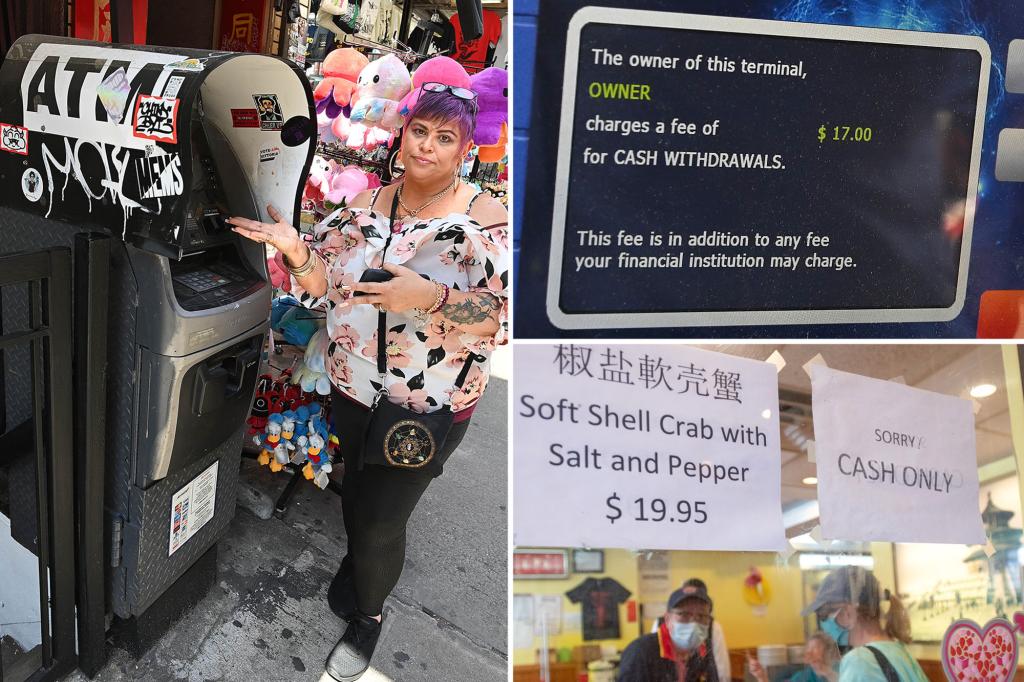 Avoid this corner of Chinatown if you need cash — it is the Big Apple’s Twilight Zone of ATMs.

Here, the bank machines are fickle, rude and sometimes downright larcenous. Customers just want to escape without mortgaging their homes.

Many of the neighborhood’s restaurants accept only cash, so sidewalk ATMs are as abundant as tilapia in a crowded fish tank. And it’s not uncommon to see anxious eaters scurrying outside to find cash after getting their bills.

That’s where you enter another dimension … not only of sight and sound – but really high surcharges.

It starts with the ATM at 46 Mott St., between Bayard and Pell streets, which charges a flat $17 transaction fee.

Many flee this robotic teller as soon as they see the surcharge and head across the street to a second ATM.

The next alternative in this personal-finance nightmare is around the corner at 55 Bayard St. It might give you cash but you’ll have to rub elbows with patrons going in and out of the massage parlor below. Neither transaction ensures a happy ending.

Over the course of three days, The Post encountered multiple furious and flabbergasted individuals in the throes of ATM agita.

A 45-year-old Manhattan attorney, who wished to remain unidentified, was having lunch at Joe’s Ginger on Pell Street that specializes in soup dumplings.

Seattle tourist Solessia Loyal, in town visiting her daughter, celebrated her 54th birthday by getting swindled. A local warned of the $17 fee at the first ATM, so she crossed Mott Street to the second machine. After spitting out only $80 of her $200 withdrawal, the machine shut down. The Seattle woman called the customer service number listed on the ATM — for alleged owner ATM World Corp. She wanted help. She got disconnected.

Loyal quipped that “it would have been a cheaper hit” if she had paid the $17 surcharge, but graciously declared she still loves New York.

Heather Stone, 34, a tourist from St. Louis, wasn’t so diplomatic.

“They are out of their f–king minds!” the Show Me State resident fumed when she saw the $17 fee. “You expect things to be expensive in New York but to be charged for your own money in this economy is crazy.”

Wellington Chen, the director of the Chinatown Business Improvement District, said visitors should use ATMs inside banks, not on the street. “There are at least 30 banks in Chinatown. Every major corner has one. I highly encourage customers to use these banks and avoid the exorbitant fees.”

And if you think the government will help you avoid getting ripped off, good luck.

The state Department of Financial Services does not regulate independent ATM machines and ATM networks, and does not have the authority to regulate fees.

The city’s Department of Consumer and Worker Protection “does not have ATM specific rules. However, we do enforce the Consumer Protection Law if there is deceptive conduct. For example, if the ATM was charging fees without disclosing it to the user,” said spokeswoman Laura Feyer.