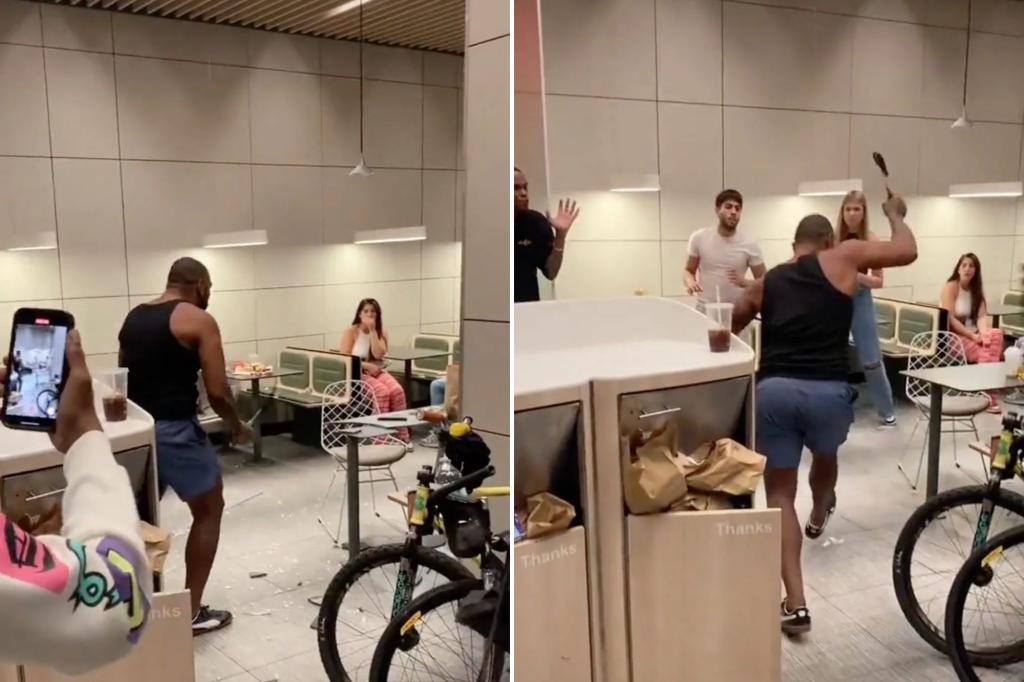 A man who went on a scary ax-swinging rampage at a Manhattan McDonald’s on Saturday morning had flipped out after a young woman “rejected” his advances, a witness said.

Michael Palacios, 31, was arrested after cellphone video showed him grabbing an ax out of his backpack, destroying property and terrorizing customers inside the Delancey Street fast-food restaurant just before 2:30 a.m.

Ruben G, an Uber Eats delivery man who witnessed the fight, told The Post the altercation began after Palacios was spurned by the unidentified woman.

“So basically he got into an argument with a girl, and then the girl rejected him. She didn’t want to talk to him. He kept going at her…that’s when the guys she was with stepped in and they started arguing. It all led to that,” Ruben said.

“He was trying to talk to her and whatever. He was asking for her number, where she was from, and I guess she felt some way. She replied back in a certain manner that she didn’t want to give too much info and he kept pushing on.”

Alcohol also played a role in the would-be pickup artist’s failure to impress the woman, according to Ruben.

“He was drunk. He was talking to me; I can smell the liquor off him,” said the Uber Eats driver, who was back at the Lower East Side McDonald’s again Saturday night

Palacios is seen in video footage taking punches from three men before he calmly retrieves the ax, smashes a floor-to-ceiling glass panel and hacks up several tables and walls.

He then slaps one of the men he was previously fighting with out of his chair – and approaches a scared woman sitting at a table to yell, “Don’t be afraid of me, be afraid of him!”

After the rampage, Palacios fled the scene on his bike but was picked up a short time later by police on nearby Ludlow Street, the driver said.

“Bro, there was a glass here and a glass there. He smashed both of them. He broke the table in half with the ax.”

A worker at the eatery said he had never seen the suspect before, but he wasn’t shocked about the violence, which he said is “common in the area.”

The worker, who declined to give his name, said the damage “was a lot” and the situation was above his paygrade.

“The higher ups can deal with that,” he quipped.

Meanwhile, outside the McDonald’s location on Saturday night, a ranting woman kicked over a garbage can.

Palacios, a Bronx resident, was charged with criminal mischief and three counts of menacing and two counts of criminal possession of a weapon.

When reached for comment by The Post, the suspect initially declined to talk before bragging about the millions of views the clip had generated on social media — where he was being called the “ax man.”