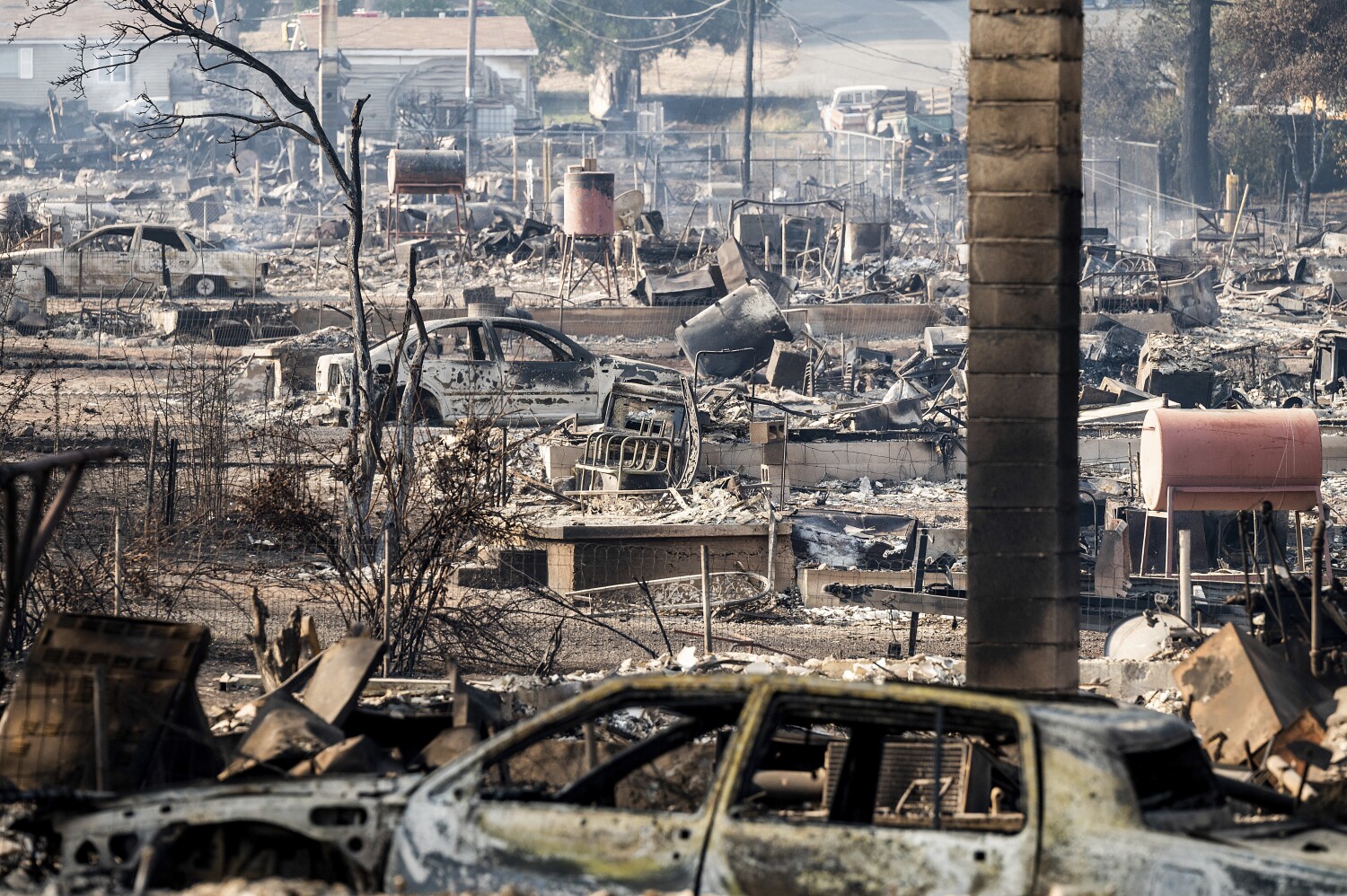 Jane Coolidge and her husband, Bruce, were driving past the town of Weed, Calif., on Friday when they saw a huge plume of black smoke.

Flames had engulfed a large commercial building, and debris hit their truck as it dropped onto the highway. Falling material landed in dry grass and scrub brush, starting spot fires along both sides of the road.

“It was harrowing,” Coolidge said.

The Mill fire appears to have started near the property of Roseburg Forest Products and spread to nearby homes in the historically Black community of Lincoln Heights within minutes, said Weed Mayor Kim Greene. It quickly became an urban conflagration as flames raced from house to house, the majority of them older wooden structures, she said.

“Wildfire is no longer in the wilderness,” she said. “It’s right inside the city limits.”

The commercial structure that ignited was an old building that once housed a planer mill and is now used to store spare parts for Roseburg’s active veneer plant, which was not involved in the fire, said Rebecca Taylor, communications director for the Springfield, Ore.-based wood products company. No operation activity takes place at the building, and it’s unclear whether the fire started there or nearby, she said.

Authorities had not yet determined how many homes were destroyed as of Saturday afternoon but said they were working quickly to assess the damage.

Firefighters reported 20% containment of the blaze, which has burned 3,921 acres, prompted evacuation orders for nearly 4,000 people and led Gov. Gavin Newsom to declare a state of emergency for Siskiyou County. Several injuries were reported, but information about the nature of the injuries and the conditions of the wounded were not available.

“Most of the community of Lincoln Heights is gone,” Greene said Saturday, describing a scene of eerie quiet as smoke hung over the smoldering remains of the neighborhood.

The mayor had been at a community center the afternoon before when someone ran inside and shouted that a fire had started across the street. By the time she reached the parking lot, flames had jumped Railroad Avenue and were racing toward Lincoln Heights, throwing up massive clouds of black smoke, she said.

The fire then marched toward Lincoln Park, melting some playground equipment but sparing structures and trees, before skirting the green space and burning more homes in the Lake Shastina area, she said. There are a number of homes and ranches between the two communities, and it’s unclear how they fared. Information was hard to come by, as the town had no electricity, internet or phone lines, Greene said.

Another fire, which started hours later in more remote and rugged timberland about 12 miles to the northwest, had burned 3,395 acres and was 5% contained as of Saturday afternoon. About 21 people had been ordered to evacuate from the Mountain fire, most of them in the community of Gazelle, officials said.

Both fires were fueled by gusty winds, high temperatures, low relative humidity and vegetation desiccated by the ongoing drought, said Capt. Robert Foxworthy, a public information officer with the California Department of Forestry and Fire Protection. Scientists have found this to be the driest 22-year period in at least 1,200 years and concluded that climate change has intensified the megadrought’s severity.

“All that contributed to pretty explosive growth,” Foxworthy said.

Activity on the Mill fire moderated overnight into Saturday as winds let up and conditions cooled, enabling crews to start putting a line around the fire, he said. By contrast, the Mountain fire continued to burn actively.

“The two fires have different concerns,” Foxworthy said. “The Mill fire is burning in a more populated area. Then the Mountain fire is in a lot more steep and rugged terrain.”

The fires come amid a difficult summer for Northern California’s rural Siskiyou County. The McKinney fire started in the Klamath National Forest near the border with Oregon in late July and quickly grew into the state’s largest of the season so far, burning more than 60,000 acres, killing four people and destroying 185 structures.

Although a cause has not yet been officially determined, multiple lawsuits filed on behalf of residents allege the fire was started by PacifiCorp electrical equipment.

About the same time, thunderstorms sparked a rash of smaller fires throughout the county, with the largest, the Yeti fire, burning nearly 8,000 acres and prompting evacuation warnings in the Happy Camp area.

Parts of Siskiyou County were also damaged last year by the lightning-sparked Lava fire, which burned along the slopes of Mt. Shasta east of Weed.

The 2014 Boles fire, which a man eventually pleaded guilty to recklessly starting, destroyed more than 150 buildings in Weed, essentially burning down half the town, Greene said.