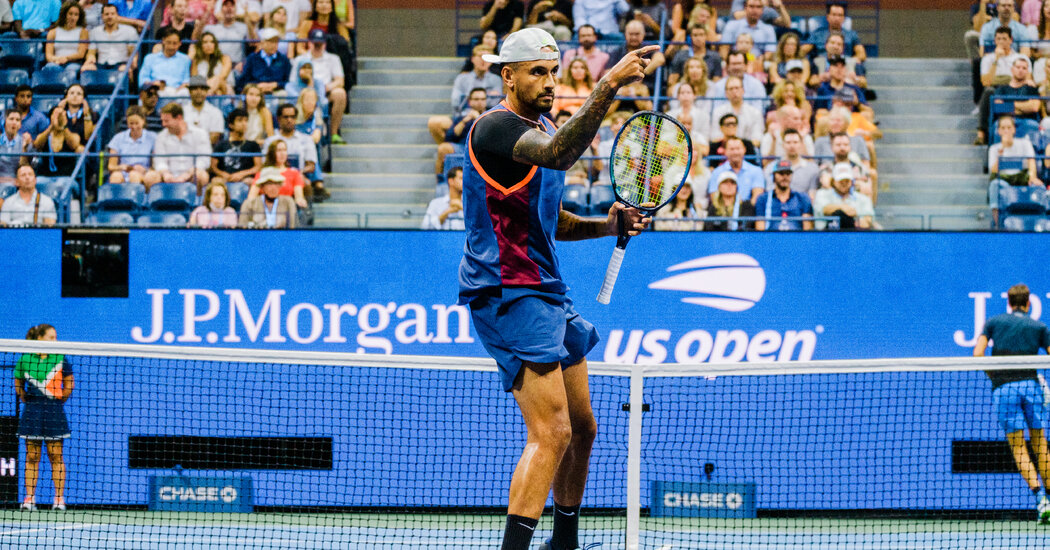 Nick Kyrgios’s finest season continues to get finer, and on Sunday he defeated No. 1 Daniil Medvedev, the defending U.S. Open men’s singles champion, 7-6 (11), 3-6, 6-3, 6-2, with a deeply convincing display of power and finesse to reach his first quarterfinal in New York.

Sunday’s fourth-round match was played at breakneck pace and peaked in terms of mutual quality of play in its torrid opening set. Both men appealed to the sellout crowd in Arthur Ashe Stadium for support and both saved three set points before Kyrgios secured it after 63 minutes.

But though Medvedev, who will lose his No. 1 ranking after the U.S. Open, rebounded to win the second set, Kyrgios quickly took command, breaking serve in the fourth game of the third set after Medvedev jumped out to a 40-0 lead. Kyrgios, a combustible Australian who threw his racket several times in frustration on Sunday, controlled the big points and his own service games from there and finished off the victory with his 21st ace.

In terms of seedings it was an upset. Medvedev is No. 1. Kyrgios is No. 23. But it did not feel like an upset. Kyrgios now leads their head-to-head series 4-1 and has been playing the most consistent quality tennis of his career in recent months at age 27.

He reached his first Grand Slam singles final at Wimbledon in July, losing a close match to Novak Djokovic, and backed that up by winning the Citi Open in Washington, D.C. last month and by beating Medvedev in the second round of the National Bank Open in Montreal.

But for Kyrgios, despite his serve and fast-court skills, the U.S. Open has long been a stumbling block. In eight previous appearances, he had not been past the third round. This year, he is into the quarterfinals with a fine chance to go further. His next opponent will be Karen Khachanov, the No. 27 seed from Russia. The other quarterfinal in the top half of the men’s draw will match No. 13 Matteo Berrettini of Italy against No. 5 Casper Ruud of Norway.

None of the four has won a major singles title, and if Kyrgios can maintain the level he displayed on Sunday, he is certainly a threat to any man still in contention at the U.S. Open.

“I want to go all the way, and hopefully it’s possible,” Kyrgios said.