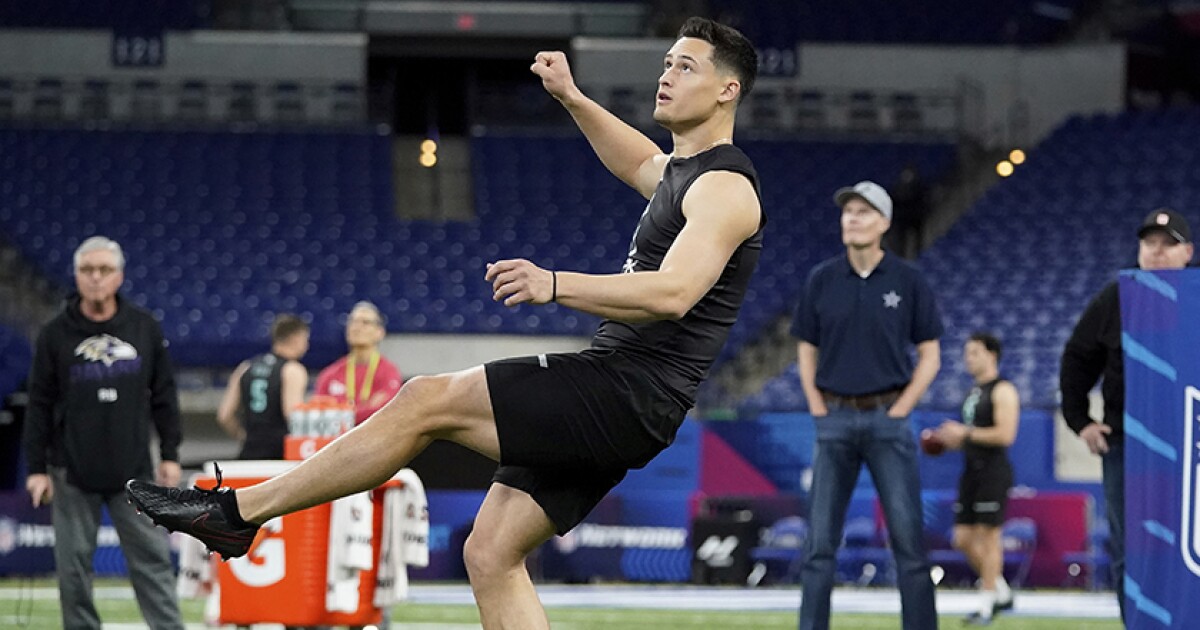 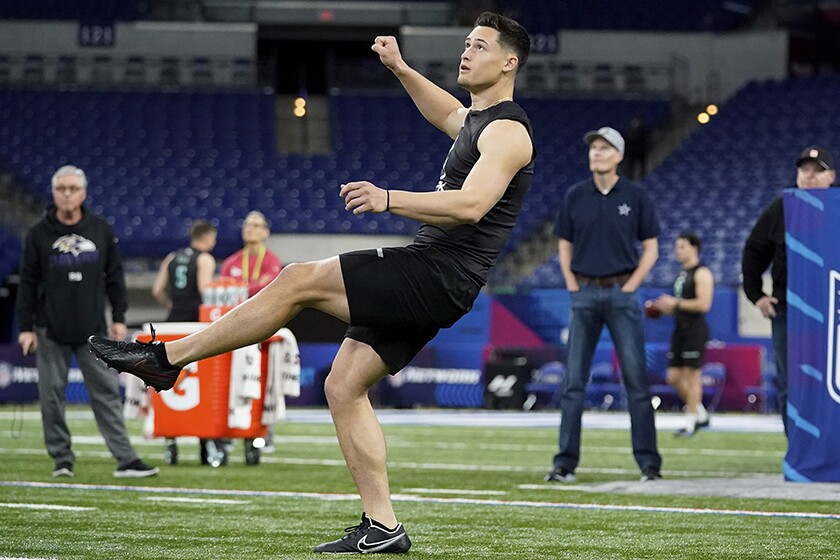 The Buffalo Bills on Saturday said they were releasing punter Matt Araiza from the team, two days after a civil lawsuit accused him and two other former San Diego State University football players of gang raping a 17-year-old girl last year at an off-campus party.

Araiza, 22, whose powerful and precise kicking in college earned him the moniker “Punt God,” was accused of bringing the teen into a room during the party where she was repeatedly raped.

The lawsuit, filed in San Diego County Superior Court, alleges that the then-high school senior went in and out of consciousness but remembers moments as the men took turns assaulting her.

The Times reported on the allegations on Thursday.

In a news conference, Bills General Manager Brandon Beane said the past 48 hours since the allegations surfaced have been difficult for everyone inolved, including the teen at the center of the lawsuit.

“We just think it’s the best move for everyone to move on from Matt,” Beane said Saturday.

The other men named in the civil complaint are Zavier Leonard and Nowlin “Pa’a” Ewaliko. Leonard was listed previously on the university’s fall football roster as a redshirt freshman, but the university said Saturday in a statement that he is no longer on the team. Ewaliko was on the team last year as a freshman but is not on the current roster.

Araiza and the other men have not been charged with crimes related to the allegations. San Diego police have not publicly identified any suspects or released other basic details about a criminal investigation they conducted into the rape allegation, which has been turned over to prosecutors in the county district attorney’s office, who will determine whether to file charges.

According to her lawsuit, the young woman alleging the rape allowed police to record phone calls she had with the men named in the lawsuit who police “had determined were present in the room when the rape occurred.”

She previously told the Times that she ultimately wanted her alleged rapists to be held accountable for their actions.

“I just really want to see some sort of accountability,” she said Thursday after the lawsuit was filed. “I feel like I’ve dealt with enough of the consequences of what happened that day.”

On Saturday, Araiza’s lawyer, Kerry Armstrong, released a statement saying, “Matt is very disappointed that his career with the Bills ended not because he played poorly, but because of false allegations leveled against him by a young lady and her attorney. I hope he is back in the NFL soon. He deserves to be, as he is the hardest-working 22-year-old I know.”

In an interview on Thursday with The Times, Armstrong said his investigator spoke to witnesses from the party who contradict the allegations against Araiza.

“It’s a shakedown because he’s now with the Buffalo Bills,” Armstrong said, adding, “There is no doubt in my mind” that Araiza didn’t rape the teen.

Calling the decision by the Bills to cut Araiza “the self-inflicted justice he deserves,” the accuser’s attorney, Daniel Gilleon, lashed out at Araiza and Armstrong in a statement Saturday.

Gilleon said that after he told Armstrong that the woman was not interested in being paid by Araiza, Armstrong nonetheless offered an amount of money to settle the issue, which the woman rejected. The shakedown accusation, Gilleon said, was “utterly inhumane and stunningly foolish.”

Gilleon also said he had contacted the Bills organization to alert them to the allegations against Araiza but had been rebuffed.

“The Buffalo Bills had no choice but to cut their young punter after so badly botching their response to our claim: they ignored us, as though what I warned them would happen could be avoided if they just kept their heads in the sand. This is what enablers do.”

Araiza’s name surfaced in connection with the rape allegation in at least one report made by student athletes within days of the party to San Diego State officials through an anonymous campus reporting system, according to internal campus records reviewed by The Times.

According to the lawsuit, the teen told Araiza she was a high school student and, even though he could see she was highly intoxicated, he sexully assaulted her outside the party. . Then Araiza took her to a bedroom where Leonard, Ewaliko and at least one other man were, the complaint alleged, and threw her down on the bed face first. The lawsuit said she was raped for an hour and a half until the party was shut down.

The latest developments come as San Diego State continues to face criticism after a Times investigation found that the university decided not to alert the campus community about the alleged gang rape and waited more than nine months to launch its own investigation.

Campus officials have said police asked them to not take any action that would compromise their investigation and that they were not required by federal law to send out a crime notification. After The Times report, San Diego State officials began posting some information about the October incident on a campus website.

Campus officials have said they asked San Diego police to provide information to the teen about Title IX, the federal law that prohibits discrimination on the basis of sex at federally funded educational institutions. The university, however, has not answered repeated questions from The Times about why campus police did not give that information directly to her father.

The teen has publicly criticized the city Police Department’s handling of her case, which she believed stalled out after the new year, as well as San Diego State’s inaction. Her father, who spoke to The Times on the condition of anonymity, said that he shared his daughter’s account with campus police three days after the party and was never provided information that would have helped him lodge a complaint that could have spurred a Title IX investigation.