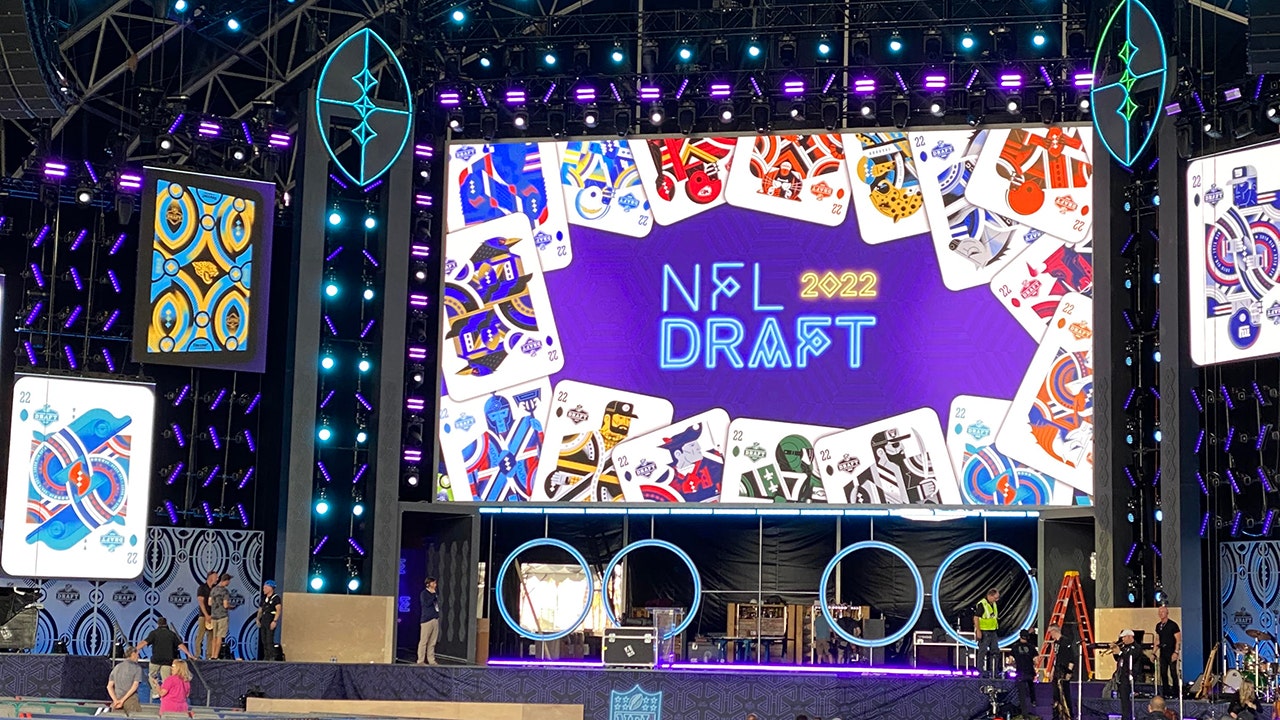 LAS VEGAS – The 2022 NFL Draft will begin Thursday night in Las Vegas, and the workers who have been preparing for the event created a very thematic stage and area that will represent the city well.

The draft was originally supposed to be held in Las Vegas in 2020, but the coronavirus pandemic forced a change and put the entire event on live video stream instead. After a stop in Cleveland last season, the draft returned to where it was supposed to be two years ago.

Since April 1, workers have been building a draft set adjacent to the Caesars Forum and behind the High Roller outside The Linq. The theater is more than 105 feet wide and over 220 feet long with a video screen with over 1 million LCD pixels, according to NFL Senior Director of Event Operations Eric Finkelstein, who spoke to the media Tuesday.

The Jacksonville Jaguars will be on the clock first Thursday night.
(Fox News/Ryan Gaydos)

He said there are seats for 1,500 paying customers who want a unique experience, but fans will be able to attend the NFL Draft Experience in the parking lot next door for free and be able to flow through the venue for a look.

“Certainly still have plenty to get done, and we’ll be working hard in all areas up until the commissioner (Roger Goodell) steps up to the podium and puts the first team on the clock,” Finkelstein said. “We couldn’t be more excited to be here in Las Vegas. Clark County has welcomed us with open arms. I know it’s multiple years in the making. We were obviously planning to be here in 2020, but we’re excited in 2022 that we’re finally here to bring this to life. We can’t wait for Thursday night.”

NFL Director of Events Heather Nanberg said there will be an enhanced experience for draft prospects, who will enter through the Caesars Forum onto the stage. The prospects who are attending the draft will be in a comfortable lounge area before hearing their names called.

A certain number of fans will also be able to watch the draft from the “Inner Circle.” Nanberg said each of the 32 teams gets to invite 20 of their most passionate fans to sit in that area.

The NFL Draft stage will have a unique Las Vegas vibe in 2022.
(Fox News/Ryan Gaydos)

Among the interesting things fans will notice while either walking into the theater or walking past it would be the Las Vegas feel the NFL added to its draft this year. There are playing cards on the sides of the theater with team logos. The stage is purple and the zero in 2022 is diamond-shaped.

“I think that’s a key thing for the draft. The amazing thing about this event is — since we took it on the road starting in Chicago in 2015 — is that we really want to take on the character of where we are,” Finkelstein said. “It’s not a cookie cutter event where you can just drop it into any place and it has to be this way, this size, this look, this feel. We really spend a lot of time trying to figure out how can we embody and really highlight where we are. So you really get a sense in place. So I think it’s something that we’re really excited about being able to do, really lean into things that are unique.

“There’s some, some small touches around, even like the circles that are on the stage in a welcome to Las Vegas sign. It’s a little bit of a tribute to that. All of the lights. Obviously, we have a tremendous reverse shot here of the high roller, which is certainly very Las Vegas. It’s something we always try to find when we put this together, which really makes it exciting.”

Nanberg said the idea is to engage the fans as much as possible, which is why having fans flowing through the edge of the event is an important feature.

“As the draft has evolved, it’s become less and less of a seated event and more of like a concert. People get to sort of flow in and out. It’s really more of a celebration and a party than it used to be. Like back in the day when it was more of sitting in an actual theater,” Nanberg said. “We’ve obviously held onto that concept but really got to a place where it’s much broader than that.”

NFL fans will be able to watch their team roll the dice on draft picks beginning Thursday night at 8 p.m. ET, when the first round begins. The second and third rounds will start at 7 p.m. ET on Friday. The fourth through seventh rounds begin at noon ET Saturday.

The uniqueness of Las Vegas is everywhere in the draft theater.
(Fox News/Ryan Gaydos)

There will only be 21 prospects attending the NFL Draft this year. Read below for a list.