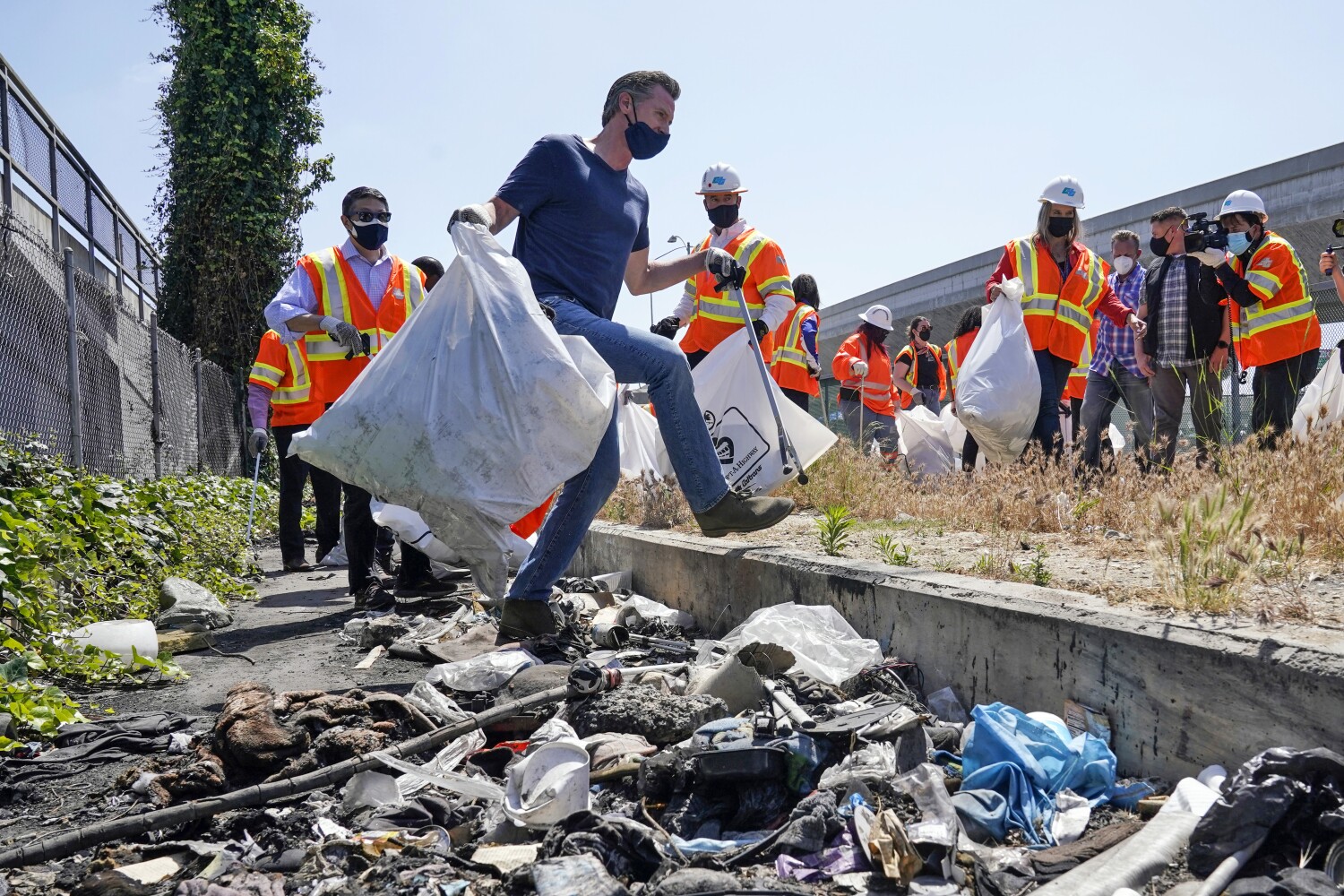 Gov. Gavin Newsom provided few details in his revised budget blueprint for how he plans to fund a sweeping proposal to use the courts to order treatment for homeless individuals with severe mental illness and addiction, although he insisted there are billions of dollars available to start implementing his plan.

Newsom in early March announced his Community Assistance, Recovery and Empowerment Court program, known as CARE Court — an ambitious effort to connect 7,000 to 12,000 people who have substance abuse and psychotic disorders, such as schizophrenia, with treatment and shelter assistance. A CARE Court plan might include medication and mental health services to stabilize a participant for up to two years, along with a plan for housing, a public defender and a personal advocate.

During a press conference Friday to unveil his $300.6-billion budget for 2022-23, Newsom said he has in recent years funneled billions into the services and housing necessary to make CARE Court successful. The Newsom administration has called on the Legislature to quickly pass the new budget proposal, so the governor can sign it into law by July 1.

The budget proposal includes nearly $65 million this year to kick-start CARE Court. Some $39 million would be spent to help California’s judiciary conduct CARE Court hearings and provide other related resources, while $10 million would finance a supporter program within the state Department of Aging. A little more than $15 million would go to counties for training and technical assistance.

Newsom said those investments build on existing and proposed dollars to support California’s behavioral health network and to build mental health housing. He noted $11.6 billion in annual funding for behavioral health and $4.5 billion he has pledged since last year to add thousands of housing units.

“This is unprecedented support,” he said.

Mayors of some of California’s most populous cities have supported the CARE Court framework as an innovative tool that could help thousands of people languishing in encampments and on the streets. Proponents of the plan argue that it’s the best chance to end a humanitarian crisis in the nation’s wealthiest state by providing much-needed services and shelter to vulnerable people.

But local governments and behavioral health providers have raised concerns over the funding available to sustain CARE Court. They worry that there’s an inadequate number of qualified workers, especially in the Central Valley and Inland Empire, and that Newsom’s proposal would need to come with substantial funding to fulfill its obligations.

Counties would face sanctions if they don’t meet program requirements. Newsom’s fiscal blueprint notes that his administration is working with counties, which are responsible for providing behavioral health treatment, to determine what other costs CARE Courts might include.

“Counties look forward to continued conversations on the costs and policy impacts of CARE Courts. These are critically needed in order for it to be successful,” Graham Knaus, executive director for the California State Assn. of Counties, said in a video statement. “The recent investments, while welcome, are simply nibbling around the edges of the homelessness crisis.”

Michelle Doty Cabrera, executive director of the County Behavioral Health Directors Assn. of California, said the budget has to factor in how much additional work CARE Court would create for providers, including often-overlooked responsibilities such as time spent in court and on the streets for outreach.

“And we think it will exceed hundreds of millions of dollars,” Doty Cabrera said.

A proposal to implement the CARE Court framework is working its way through the Legislature. So far, Senate Bill 1338 has passed two policy committees with overwhelming support, despite questions from both Democrats and Republicans over the legal and moral merits of the program.

Some of their worries are reflected in opposition by civil and disability rights groups that have spent weeks lobbying against CARE Court in the Legislature. The American Civil Liberties Union California Action, Disability Rights California and the Western Center on Law and Poverty, among others, have argued that CARE Court would criminalize poverty and homelessness and that a forced-treatment model is not as effective as connecting people to voluntary services and housing.

“As a Black woman currently living with mental health disabilities, lived experience of traumas such as houselessness, wrongful incarceration and misdiagnosis of mental health disabilities for nearly 10 years, I oppose Governor Newsom’s proposal of CARE Court,” Shonique Williams, a statewide organizer for the group Dignity and Power Now, said in a statement. “Its framework is not a true model of care for communities of California, but a plan to create and fund a new addition to the carceral system.

“As with the current criminal courts, marginalized communities will not have the proper tools and resources to defend themselves against CARE Court when being forced into involuntary treatment, and will ultimately be subjected to the harm of being from an underrepresented community in America,” the statement added.

Newsom’s budget director, Keely Martin Bosler, said Friday that the administration doesn’t yet have a clear sense of the costs that would be borne by counties but will continue to work with local officials to better understand what the program would need to succeed. Lawmakers and Newsom will spend the next month negotiating details on a final budget, which has to pass the Legislature by June 15.