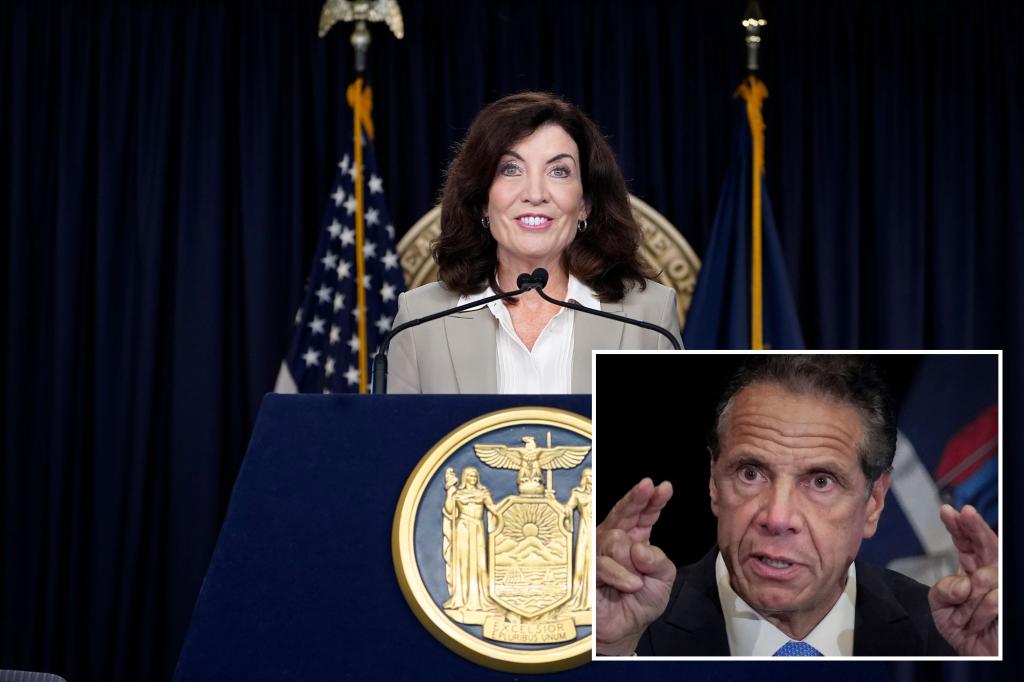 She took office promising to be a different kind of governor. But on the first anniversary of Kathy Hochul’s Albany promotion, New Yorkers are still waiting for proof she is a better governor than her disgraced predecessor.

In one sense, Hochul had an easy act to follow. Andrew Cuomo enjoyed being a scowling bully, preferred feuds over friendship and repeatedly proved the adage that power corrupts.

In hindsight, his final act of hubris, groping the help, seemed ­inevitable.

In matters of personal behavior, Hochul is a big improvement. She smiles a lot, seems genuinely gracious and is deferential, sometimes to a fault.

The problem is one of substance. What does she stand for? What would she do in a full term to improve the lives of 20 million New Yorkers?

Most important, what is she willing to fight for?

She has suggested that New Yorkers will get full answers to those questions only after she is elected in November. As a donor of hers told me, she doesn’t want to do anything that could jeopardize her chances of winning.

That’s the sort of fearful attitude that could bring defeat. And deservedly so.

Elections are not supposed to be guessing games. Voters have a right to know why she deserves four more years.

And the idea that she will do big, bold things she lacks the courage to campaign on is fiction. Without specific promises, there is no mandate and, even if she wins, she will get nothing done.

The laundry list of supposed accomplishments her office issued Tuesday reads like an inflated ­résumé adorned with amateurish descriptions of how “she got to work,” acted “without delay” and “continued to deliver results.”

Her Republican opponent, Rep. Lee Zeldin, says “she doesn’t want to talk about anything. She’s trying way too hard to avoid the key issues.”

Zeldin, who aims to end Dems’ absolute lock on Albany power, correctly put crime at the top of the list of the missing issues. Hochul talked forcefully about it early on, but has done precious little about the scourge that is sweeping through the state’s largest cities and most of its smaller ones.

Her intervention in the case of the parolee who sucker-punched a bystander in The Bronx, then was turned loose even as the victim neared death, was welcome but it was an exception. Given her silence on the heinous cases that daily fill police blotters from Gotham to Buffalo to Rochester, it’s doubtful she would have done anything on this one if the brutal crime had not been widely viewed on a video.

Apart from a tweak in the insane bail laws Cuomo signed, she has not done anything that will improve public safety. She even refused the pleas of Mayor Adams and others to call a special legislative session to deal with the way courthouses have become revolving doors where repeat violent offenders are immediately released.

That gets to the heart of doubt about what she would fight for in a full term. Democrats have firm control of both houses of the Legislature, and the leaders have made it clear they don’t believe major changes in criminal justice laws are needed.

Why in the world would that change if Hochul wins the election without raising the issue now? Certainly legislative leaders would recognize her failure to campaign on it as a sign of weakness and a lack of resolve, so would feel no compunction to change their position.

Then there’s the overwhelming tax burden. The state budget was chock full of billions of federal dollars, much of it designed to compensate New York for pandemic tax-revenue deficits that weren’t nearly as large as predicted.

If Hochul wanted to use some of that money to cut taxes, she kept it a secret, meaning state levies will remain among the nation’s highest and continue to contribute to the out-migration of high earners.

Nor did she publicly push the state’s congressional delegation, which includes Senate Majority Leader Chuck Schumer, to raise from $10,000 the limit on state and local taxes New Yorkers can deduct from federal taxes.

What about expanding charter schools — does Hochul support that and lifting the cap blocking new ones in the city? Who knows?

How about the sudden influx of illegal border crossers, with more than 6,000 arriving in the city? Has she lobbied the White House for help, or is she just going to sit by and let New York be overwhelmed?

We do know she wanted Adams to have four years of mayoral school control, but caved in to a legislative demand for just two years, a major gift to the rapacious teachers unions.

Regarding Cuomo’s deadly order forcing nursing homes to take COVID-19 patients when she was lieutenant governor, Hochul is trying to play both sides. She met with grieving families, and promised an independent investigation into the 17,000 deaths, but hasn’t selected a private firm for the assignment, meaning any findings won’t come until after the ­election.

Shades of Cuomo there, as are some other weird things Hochul has said lately.
While stumping for a fellow Dem in the Hudson Valley, she called Zeldin, former President Donald Trump and other Republicans “dictators” and said they should “just jump on a bus and head down to Florida where you belong. OK? Get out of town. Because you don’t represent our ­values.”

Hochul also used a bill-signing about Holocaust education for another swipe at Florida, saying: “I just want to say to the 1.77 million Jews who call New York home: Thank you for calling New York home. Don’t go anywhere or to another state. Florida is overrated. I shouldn’t say this, but look at the governor. It starts at the top down.”

Both incidents smacked of envy toward Florida Gov. Ron DeSantis, a successful state leader who has solid White House potential.

Nobody ever accused Hochul of being either.

Reader Lawrence Branca offers a suggestion to Mayor Adams, writing: “If he is serious about the migrant crisis, he should call Biden out for the disaster at the southern border. ­Adams should also realize that it is Biden who lacks compassion, not Texas Governor Greg Abbott.”

The New York Times leads the media cheering section for Joe Biden, but the paper’s employees are demanding raises to cover the cost of inflation caused largely by his policies.

“Thank you for your messages about the effects of inflation on your lives,” executive editor Joe Kahn responds in an email I obtained. “Many of you shared personal and heartfelt examples of how the extended period without contractual wage increases and the sharp spike in prices we’re experiencing today have resulted in hardships and disappointments.”

If the Gray Lady’s reporters and editors are as smart as they think they are, they will connect the dots to Biden. Or maybe they should learn how to code.