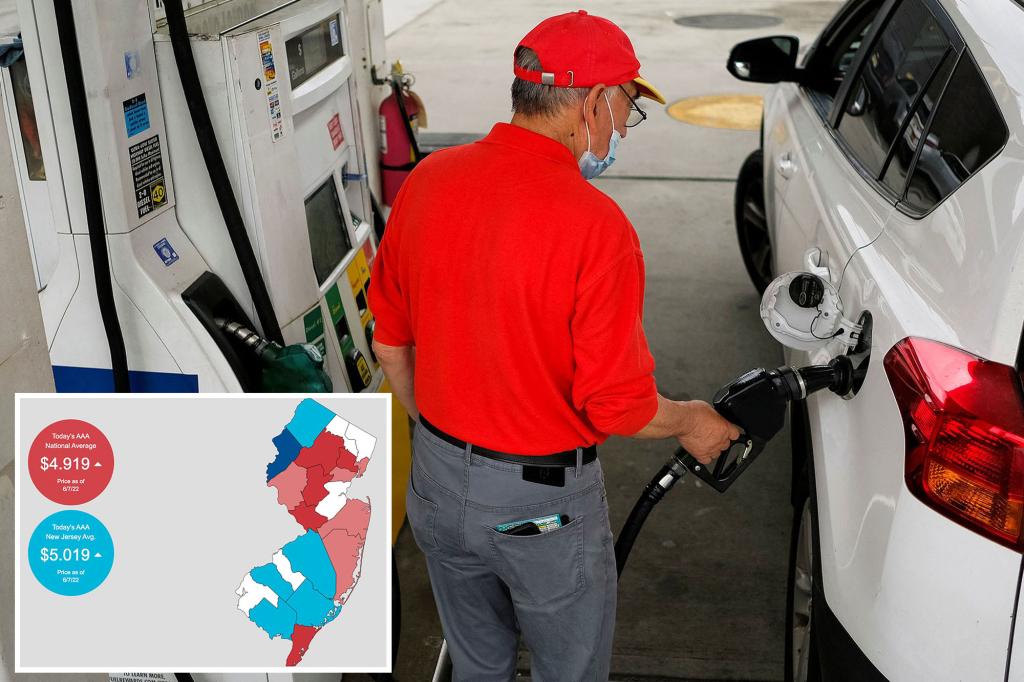 Gas prices in New Jersey topped more than $5 a gallon for the first time ever on Tuesday — as prices continue to soar to records highs across the country.

A gallon of regular unleaded now costs drivers in the Garden State an average of $5.019, NBC reported, citing data from the American Automobile Association.

The average gas price in New Jersey has surged about 12% from last month, according to the report.

In New York, the average gas price was $4.88 per gallon as of Tuesday — down 4 cents from last week but still 43 cents higher than a month ago, the AAA said.

The average gas price in the Empire State is still 2 cents higher than the current national average.

Demand for gas surged last week in the wake of Memorial Day weekend travel, according to the AAA. It caused the national average for gas to spike 25 cents in just one week to hit $4.86.

“People are still fueling up, despite these high prices,” said Patti Artessa, AAA Northeast Regional Director of Public and Government Affairs, in a statement.

“At some point, drivers may change their daily driving habits or lifestyle due to these high prices, but we are not there yet.”

Other states that have already dealt with more than $5 per gallon in recent weeks include Washington, Oregon, Nevada, Illinois, Alaska and Hawaii.

Analysts have also forecast that more states could hit the $5 per gallon average by the July 4 holiday as demand is expected to surge even high — even as supply remains tight.

Various factors have contributed to the soaring gas prices — which were $3.04 per gallon on average a year ago — including a strong rebound from COVID restrictions, disruptions in the global oil market and Russia’s invasion of Ukraine.