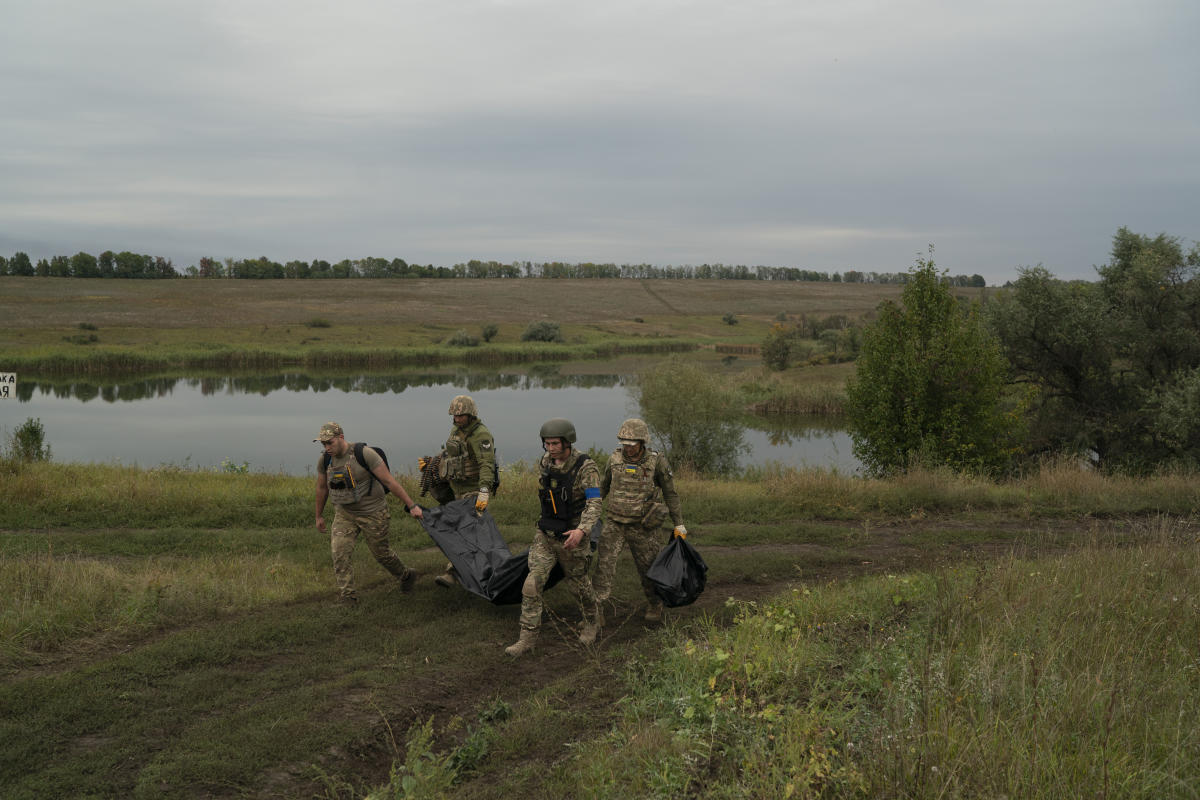 KOZACHA LOPAN, Ukraine (AP) — There are still bodies on the battlefield, lying where they fell on farm fields or inside burned-out tanks as Ukrainian troops swept through Russian-occupied territory in a major counteroffensive this month.

In this northeastern corner of Ukraine, the Russian army was pushed all the way back across the border into Russia after holding the area for months. But artillery shells still whistle through the air, fired from inside Russia and landing with resonating thumps and billows of black smoke on Ukrainian territory.

Despite the shelling, a small group of soldiers winds its way along a rutted mud track to where a dead Ukrainian combatant lies, spotted by a drone used to search for bodies and shallow graves.

“It’s a risk. We are always risking our lives and at any moment there might be some shell flying in from the territory of Russia,” said Vitalii, a commander in the National Guard whose men are searching for bodies of servicemen from both sides and of civilians. He asked to be identified by his first name only for security reasons.

The dead Ukrainian is lying on his back in body armor and helmet, a cap beneath it to block out the sun. The body has been there for a long time.

They document the scene and lift the remains into a body bag before heading farther along the track to a charred Russian tank. It takes only one of the team to carry away the body bag holding the remains of the Russian found inside.

Autopsies will follow, and the details of the sites recorded and passed on to investigators looking into potential war crimes, Vitalii said.

The nearby village of Kozacha Lopan, whose edge lies less than two kilometers (just over a mile) from the Russian border, was retaken by Ukrainian forces Sept. 11.

Vitalii said the team is also hunting for graves of possible vicitms of what authorities say was a makeshift prison where detainees were abused.

In the dank basement behind the local supermarket, metal bars cordon off a corner of the room to form a large cell. Dirty sleeping bags and duvets show three sleeping spots on top of sheets of Styrofoam for insulation from the damp bare earth floor. In the corner, two black buckets served as toilets.

A few meters (yards) outside the barred cell, three dilapidated chairs stand around a table, cigarette butts and empty husks of pumpkin seeds littering the floor around them.

In a statement posted Saturday on its Telegram channel, the prosecutor’s office of the Kharkiv region, in whose jurisdiction Kozacha Lopan lies, said the room was used as a torture cell during the occupation of the area by Russian troops.

The prosecutor’s office said Russian forces had set up a local police force that ran the prison, adding that documents confirming the functioning of the police department and implements of torture had been seized. The statement said an investigation was being conducted.

The claims of what occurred in the room could not be independently confirmed.

Burial sites have been found in some areas where Russian forces were pushed out, most notably in the city of Izium, where Ukrainian officials say more than 440 graves have been found near the city’s cemetery. President Volodymyr Zelenskyy has said they contain the bodies of civilian adults and children, as well as soldiers, showing signs of violent deaths, some possibly from torture.

Throughout this border area, where fierce battles raged, villages bear the devastating scars of war: houses bombed and burned, roads pitted with craters from exploding mortar shells, smashed cars lying by the roadside.

In the days after the Russians were chased out, local people have been returning to see what is left of their homes.

“Three days before we decided to leave, it was like hell in here” from all the shooting, said Larysa Letiucha, 56, in the nearby village of Prudyanka. “It was flying from all over the place. It was whistling and exploding. We hid in the basement and … our door was blasted off.”

She left with her family in April, and returned to check on her property a few days after Ukrainian soldiers retook the village.

“I saw a horror. I still cannot pull myself together,” she said in recounting her first sight of what remained of her house. “We were living here our whole lives. We were building it, making renovations. Our whole life was invested here.”

The windows are blasted in and the ceiling leaks from where a patch is missing from an explosion. In the small house her parents built on the same plot, the entire back part is missing. Shrapnel and debris litter the house.

“Our houses are comfortable even though we live in the village,” Letiucha said. “It’s a horror. I don’t even know when we will renovate and rebuild all of this.”