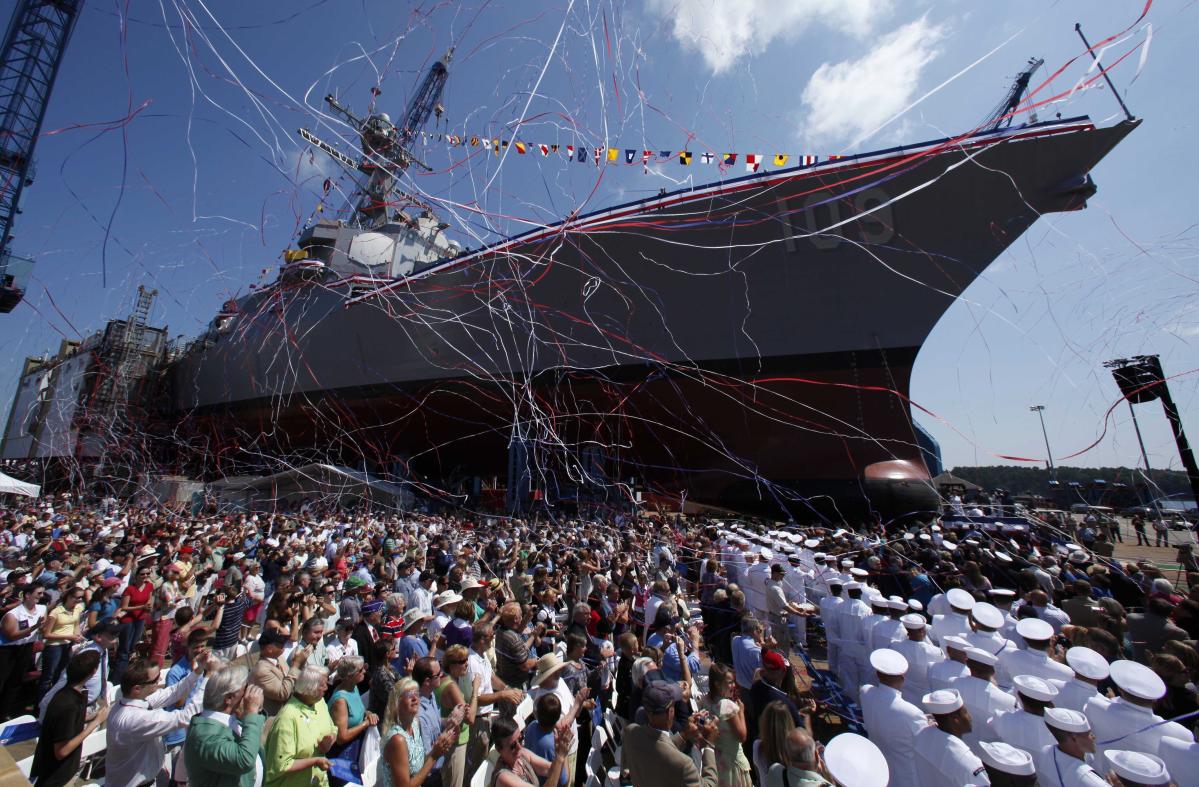 BATH, Maine (AP) — The U.S. Navy’s workhorse destroyer went into production more than 30 years ago, when Tom Stevens was a young welder.

Now, the Navy is getting ready to turn the page as it looks to a future ship brimming with lasers that can shoot down missiles and attack enemies with hypersonic missiles topping 3,800 mph.

Stevens, 52, said the warship provides an opportunity to build something new after a historic production run of the Arleigh Burke class.

“It will be an impressive destroyer that will absolutely launch us into the next generation of ships,” said Stevens, director of ground assembly at Navy shipbuilder Bath Iron Works.

The stakes are high when it comes to a replacement for the backbone of the fleet as the Navy faces a growing threat from China, whose numerical advantage becomes greater each year.

The first design contracts were awarded this summer to General Dynamics’ Bath Iron Works in Maine and Huntington Ingalls Industries in Mississippi for a large surface warship that would eventually follow production of the ubiquitous Burke destroyers.

All of that warfighting gear won’t come cheap. The average cost of each new vessel, dubbed DDG(X), is projected to be a third more expensive than Burkes, the latest of which cost of about $2.2 billion apiece, according to the Congressional Budget Office.

The Navy has vowed that it won’t repeat recent shipbuilding debacles when it rushed production and crammed too much new tech into ships, leading to delays and added expense with littoral combat ships, stealthy Zumwalt-class destroyers, and the USS Gerald Ford aircraft carrier.

“Rather than tying the success of DDG(X) to developmental technology, we’re using known, mature technologies on a flexible platform that can be upgraded for decades to come, as the technology of tomorrow is matured and demonstrated,” said Jamie Koehler, a Navy spokesperson.

A shipyard in Wisconsin started construction last week of the first in a new class of frigates, which are smaller than destroyers. Those ships used an existing design, and there are no new weapon systems.

Still, there continues to be concern about the destroyer’s cost. A high price tag would reduce the number of ships the Navy can afford to build, said Bryan Clark, defense analyst at the Hudson Institute.

“You’ll end up with the surface fleet that, instead of growing, it would be shrinking,” Clark said.

Production of the new ship is still years away.

For now, shipyards continue to produce Burke-class destroyers, which earned a spot in the record book for a production run that has outlasted every other battleship, cruiser, destroyer and frigate in U.S. Navy history. By the time the last Burke is built, it could surpass even the Nimitz aircraft carrier, which had a four-decade production run.

At Bath Iron Works, shipbuilders have worked nearly exclusively on Burkes, save for the three Zumwalt-class destroyers, and they have a backlog that’ll carry through the end of the decade.

Shipfitter Tim Garland, 57, started work in 1988 on the first Arleigh Burke destroyer, making ballistic doors and hatches. Over the years, he’s worked on just about every component of the ship, during freezing winter days and steamy hot summer days.

The shipfitter never figured that the same ship — upgraded over the years — would enjoy such longevity.

“We figured there would be a replacement ship well before now. But if it ain’t broke. Don’t fix it,” he said.

The Navy originally wanted to replace Burkes with stealthy Zumwalt-class destroyers with electric propulsion, unusual tumblehome hull and angular shape to minimize radar signature. The program was ultimately truncated from 32 ships to three because of the high cost but supporters said the technological leaps could be useful for future ships.

Indeed, the new destroyers will draw on that ship’s electric power plant to energize lasers while using a conventional hull and a radar and weapon system that’s similar to what’s currently in use, the Navy said.

Matt Caris, an analyst with Avascent, said the Navy is going to great lengths to prevent spending from getting out of control, from its view on mature technology and overall acquisition process to timetable. The first in the class of ship wouldn’t be commissioned until the mid-2030s.

“The Navy is trying to thread the needle with some potentially revolutionary capabilities in as low risk and evolutionary process as possible,” he said.

Others worry that the cost will become a drain on the rest of the fleet.

It’s possible that the Navy could afford only one of the ships per year, compared to current destroyer build rates of two to three per year, shrinking the size of the fleet over time, Clark said.

“They want to pile every mission on the the DDG(X) to make it sort of death star. They’re putting all their eggs in one basket financially,” he said.

The new destroyer represents the high end of the Navy’s aspirations.

At the other end, the Navy is also speeding research into less expensive drone ships that would extend the Navy’s sensors and offensive capability, working in concert with crewed ships that would be kept farther from harm’s way. Such a networked fleet would be spread out and harder to destroy.

In Bath, there’s a new generation of shipbuilders — thousands of them including Tom Stevens’ son, Shane Stevens — who are eager for the new program and a long stretch of steady work.

“I’m always excited when I get to learn about something new that’s high tech. That’s what I’m excited about,” the 29-year-old said.