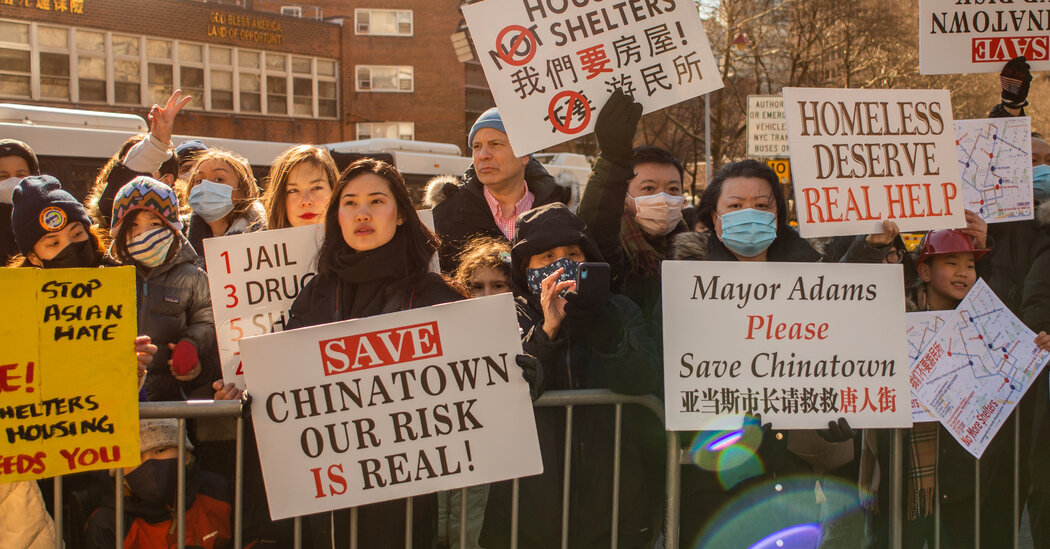 The other heavily opposed shelter, on East Broadway, would also be in another former hotel. In November, Thomas Yu, co-executive director of Asian Americans for Equality, a social-service and affordable-housing nonprofit with deep Chinatown roots, pledged support for it and said his group would provide Chinese-language assistance there.

The day after Ms. Lee’s murder, protesters pounded on the office’s doors and windows and tried to force their way in, A.A.F.E. officials said.

A.A.F.E. has now backed out of its role at the shelter.

“I would love if they would put their pitchforks down and help us,” Mr. Yu said, “because we’re all in it together.”

Opponents say the Chinatown shelters will violate the city’s Fair Share law, which mandates spreading social service programs around equitably. But the law’s requirements are vague, and the question of whether Chinatown is already overburdened is tricky.

Manhattan Community District 2, which includes western Chinatown, has no shelters; Grand Street’s would be the first.

But shelters in Community District 3, which covers the eastern half of Chinatown, including East Broadway, house more than 1,000 people. Shelter opponents note that this number is far more than the number of homeless people who come from the district and argue that the city is placing an unfairly heavy burden on the district.

To shelter opponents, the city’s rationale for locating safe havens seems infuriatingly circular: They say their existence attracts both drug dealers and other homeless people, whose presence the city then uses to justify opening more shelters.