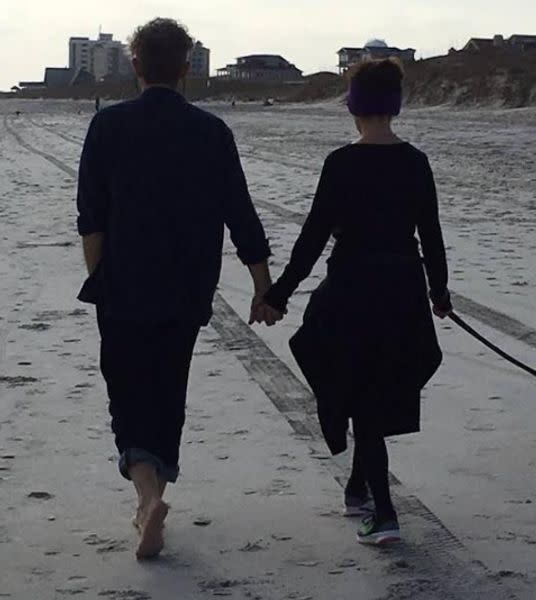 The author walks with her husband, Kai, shortly before his death. (Photo: Courtesy of Helene Kiser)

An hour after we received my husband Kai’s lung cancer diagnosis, we went outside to walk the dog. The walls of our kitchen seemed far too tight ― the air thick and hard to breathe.

At first, we didn’t say anything. We just gripped each other’s hands like we were clinging to life. On the street corner, Kai stumbled a bit, grabbed onto our neighbor’s stone retaining wall. He looked at the November sky, the nearly bare trees, the dog.

Then he looked at me.

The cogs in my mind whirled and clicked. I counted in my head, mentally tore pages from the calendar. December, January, February… June. Less than seven months away. I reached and grabbed his shoulders until he looked me in the eyes.

How logical, commanding and certain I sounded. Strong. In charge.

After months of antibiotics for a sinus infection Kai didn’t have, weeks of headaches and more coughing and low-grade fevers, a referral to an ENT specialist and prescribed irrelevant treatments, the doctor sent him for a last-ditch X-ray. They found the mass in his lung.

By the time it was discovered, the tumor was already 14 centimeters. And it had metastasized. Kai was a stage IV dead man walking.

Unlike cancers such as prostate and breast cancer, for which the survival rates have steadily increased over the last half a century due to simple factors such as awareness and routine screenings, lung cancer survival rates are low. The diagnosis nearly always comes too late to do anything but start therapies like chemo and radiation ― things that treat but can’t cure.

Kai was, for a 59-year-old man, incredibly healthy. He ate all the right things (I know because I was the cook in the family), exercised every day, saw doctors regularly. A former football cornerback, he had no known risk factors and no warning signs. In fact, he’d passed a full battery of physicals and X-rays and blood tests in preparation for an elective knee replacement surgery only a year prior.

But cancer found him anyway. The tumor went from nothing to enormous, growing an average of 1.16 centimeters per month.

“How long?” we asked the doctor.

We were determined not to use the internet for medical information. We promised each other.

I mostly kept the promise. Sometimes I couldn’t help it. I’d cave, Google a quick answer only to catch a phrase, choke on my breath, jerk away, close out the offending webpage that read “the two-year survival rate is about ten percent; the five-year about zero.”

“The average is 18 months,” Kai’s doctor told us. He quickly followed with, “But that takes into account all patients, most of whom are much older and sicker, far less healthy than you are, with multiple risk factors. We have every reason to believe you will far exceed the average.”

He added, “Let’s focus on the kind of life you want to live ― what you want to do with your time.”

The tumor went from nothing to enormous, growing an average of 1.16 centimeters per month.

On Sept.12, the 60th anniversary of President John F. Kennedy’s “Moonshot” address to the nation, President Joe Biden announced plans for “another moonshot: ending cancer as we know it.”

Like most of us, Biden is no stranger to the impotent pain of having a loved one suffer from the disease. His son, Beau, died from cancer in 2015 at the age of 46. The fact of the disease is bad enough, but the complete inability to do anything at all is a feeling of helplessness and loneliness like no other.

The president launched the Cancer Cabinet in February 2022, and in July, its priorities were to, among other goals, improve cancer screening, decrease cancer’s impact, and support both patients and caregivers. Specifically, Biden’s moonshot prioritizes biotechnology research and creates a new governmental agency dedicated to “biomedical innovation that supports the health of all Americans.”

Kai, with his squamous cell carcinoma, was one of the more than 2 million people worldwide — about the population of Chicago, home to his beloved Cubs — served that diagnosis in 2017 alone, and in the disease’s advanced stages, it was too late to send it back to the kitchen: “No, thank you. This is not what I ordered.”

The two treatment options for him were equally repulsive and ordered together: chemotherapy’s chemicals through the bloodstream and radiation’s X-rays to a localized area.

Neither therapy distinguishes between healthy and cancerous cells; each kills both.

But the doctor told us that, because of Kai’s overall health, he was a candidate for a cutting-edge treatment: immunotherapy. By 2017, it had shown great promise in clinical trials. A moonshot of sorts, albeit on an individual scale.

Designed to attack invaders while protecting citizen cells, the human immune system learns a new language through this treatment. Instead of targeting the cancer directly, immunotherapy overhauls the body’s communication network to activate all defenses toward the destruction of the cancerous, once-normal, cells.

It would not cure him — a cure was not possible — but immunotherapy could lead to long-lasting remission and increased survival time.

The out-of-pocket cost, the doctor told us, was about $500, a minuscule price to pay for something that might give more time.

How much life is enough, when we can’t have forever? I guess the answer is, like any toddler would tell you, more.

Isn’t this what we all want — both for ourselves and for the people we love? More time? Such a human desire to continue life at any cost. To spare no expense and no treatment, to prolong the inevitable for us all.

The doctor ordered a battery of genetic tests for markers to determine appropriateness.

The bill we later received turned out to be closer to 100 times the cost we had been quoted. And it made no difference. Kai’s profile was not a match. And despite the prognosis — enough time still to live — he died just five months after his diagnosis. Five weeks before his 60th birthday.

He was supposed to have made it longer. I said so. The doctor said so. Even the internet said so. But how much life is enough, when we can’t have forever?

I guess the answer is, like any toddler would tell you, more. Whatever we get, more is what we want. This goal is always the moonshot, no matter how ambitious and unlikely to succeed. We feel we have to try, down to the last possible Hail Mary pass. Giving up is the only real failure.

And we did try, with everything modern medicine could offer. Kai’s medical team took a moonshot with his weekly chemo and daily radiation, more treatment than most cancer patients can bear. Kai was so strong he never even looked sick, never stopped eating and never lost his hair. Right up to the very end, Kai was recognizably himself: handsome, strong, loving and wickedly funny.

Five years later, I still have so much to learn about who I am as a widow ― not a wife. It’s too late for Kai, and for Beau, and for the other 1 in every 6 people on earth who have already died from cancer — each of them a parent, sibling, child, partner, friend. All of them loved.

But I hope with all my heart that Biden’s moonshot finds its mark. If some cancers might eventually be cured and other cancers can join the “vaccine available” ranks of illnesses like COVID and chicken pox and the flu, maybe we can break some of grief’s stranglehold over us, at least long enough to fully live the lives we wanted.

Helene Kiser is the author of “Topography.” Her work has appeared in dozens of literary magazines and anthologies and has been nominated twice for the Pushcart Prize. She is currently at work on a memoir. You can find her on Twitter at @HeleneTheWriter.