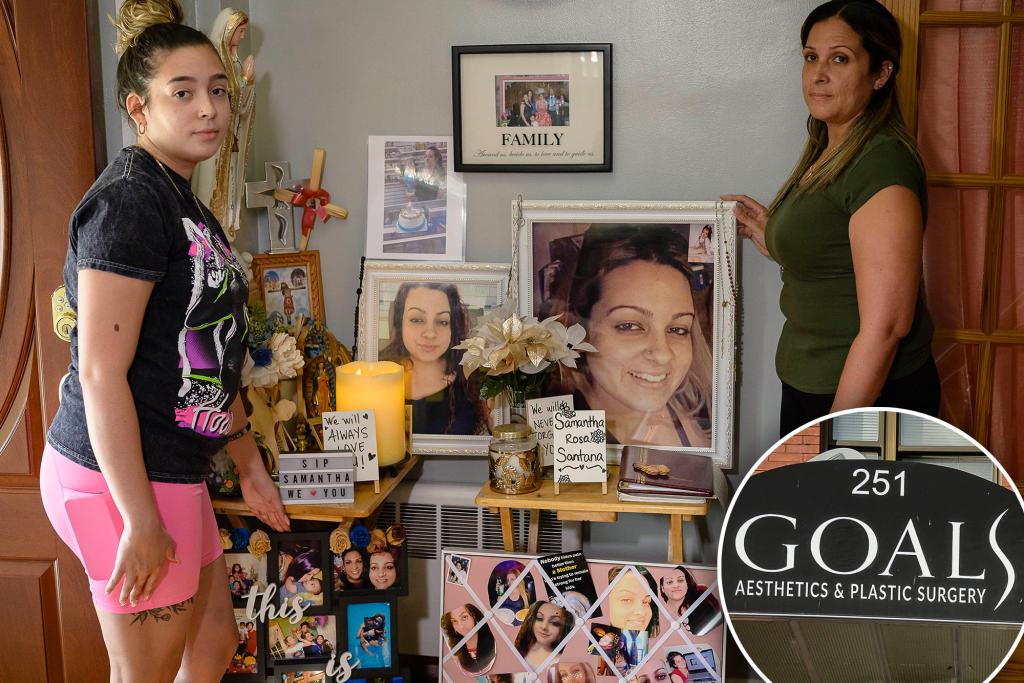 Samantha Santana was a selfless “Mother Goose” figure. The 25-year-old dental assistant from the Bronx was raising her son Ryan and his half-brother and always had a gaggle of children around her.

“If Samantha had her last dollar, she would give it to you,” her mother Nancy Negron told The Post. “She loved children. She had a great heart.”

She also battled with self-esteem and image issues, which only worsened after she gave birth to her now 7-year-old son. Her sister Aliyah Santana said her older sibling tried to whittle off the pounds at the gym and with diets, but she wasn’t successful in shedding the weight.

Then Santana found a magic bullet on Instagram: Goals Plastic Surgery, which had a location in Harlem and an Instagram page with 1.2 million followers showcasing perfectly rounded behinds that were the result of a Brazilian butt lift. The popular procedure sucks fat from the stomach, hips and thighs and redistributes it into the buttocks to create the preternatural silhouette made famous by Kim Kardashian.

“Samantha wasn’t after being curvy and going out,” Aliyah said. “She just wanted to be more comfortable [in her body]. After the surgery, she was going to be happy with herself.”

At Goals, the “BBL,” which is not covered by insurance, is offered at discounted prices. According to a text message with a Goals employee, Santana was quoted $7,300 for the procedure. (Dr. David Shafer, a double board certified plastic surgeon on the Upper East Side not affiliated with Goals, told The Post the procedure usually costs anywhere from $12,000 to $25,000.)

Despite her family’s misgivings, Samantha put down a deposit for the surgery and researched the doctor for months. Leading up to the procedure, her Goals coordinator said that her BMI was too high. She was given a pricey ultimatum.

“They put her on a deadline. They said you need to get your BMI to this amount before this date or you will lose your deposit. She basically went on a crash diet, eating once a day, so she didn’t lose out on her money,” recalled her sister.

Santana dropped about ten pounds in two weeks and on the morning of September 23, 2020, she arrived at the W. 135th Street location ready to kickstart her new life.

There was an initial wrinkle. The doctor scheduled to operate on her, whom she had diligently researched, was swapped for another doctor, Negron said she learned from an NYPD detective who investigated the death. (In her contract, the clinic reserved the right to switch doctors.)

“Samantha was a little more reserved…on the shy side. Maybe another person would have been like, ‘Oh, no, where’s my doctor,” said Negron, who works as a liaison at Montefiore Medical Center.

Plus, she had already taken the cocktail of drugs (Xanax and oxycodone) prescribed to numb her for the procedure, which her mother said had rendered her woozy.

She went ahead with the surgery and her boyfriend picked her up around 4 p.m.

The next morning, she was pronounced dead at Jack D. Weiler Hospital. Her official cause of death was a toxic combination of oxycodone, alprazolam (Xanax), lidocaine and fentanyl. “It’s just the worst thing,” said Negron through tears. “You aren’t supposed to bury your children.”

Sadly, Santana wasn’t the only one to die or require extensive corrective surgery after a procedure at Goals. According to an explosive Marie Claire investigation into the New York City-based clinic, the practice is a “little shop of horrors” using deceptive social media methods to lure in vulnerable women. Just a few days after Santana died, Che McIntosh, a 27-year-old dancer from The Bronx was operated on by Dr. Thaddeus Boucree, D.D.S, M.D., and died that evening of the same combination of drugs. Boucree is no longer allowed to practice medicine in New York but he is working out of a dental office in New Jersey. (Boucree did not return a call from The Post requesting comment.)

Goals was founded in 2016 by pediatrician Sergey Voskresenskiy, a native of Azerbaijan. About a decade ago, he changed his name to Dr. Voskin while becoming a US citizen, his attorney said. The clinic was originally called Allure before changing its name to Goals in late 2017.

The same year he started the practice, Voskin’s wife Ella was released from a federal prison. She had served 36 months for conspiring to defraud Claims Conference, a reparations organization for Holocaust survivors, out of $57.3 million. A former employee told Marie Claire: “Ella is the mastermind. When it comes to social media, she’s lowkey a genius.”

According to the report, Voskin employs a stable of contracted doctors, none of whom are required to be board certified plastic surgeons. (Any licensed physician can perform plastic surgery.)

“Anybody can open up a surgery center. And then what you’re doing is using the physicians as independent contractors in order to escape the vicarious liability argument — or at least be able to defend against it,” Florida-based attorney Andres Beregovich told Marie Claire.

Joshua Lurie, a general counsel for Goals-branded entities and Dr. Voskin, told The Post that “a significant amount of statements in Marie Claire are demonstratively false.” He added that the Harlem location that treated Santana closed in January 2021 for “business reasons” and “did not permit for the prescription of Fentanyl to patients.” He also said that federal law prohibits them from commenting on specific patients without a HIPAA release from the family.

“We do a BBL under anesthesia. It’s the safest thing. We have a board-certified anesthesiologist there monitoring the patient’s blood pressure and heart rate,” said Shafer.

At Goals, patients are awake during the procedure and are given a cocktail of pills to numb them.

Aliyah remembers calling her sister at 8 p.m. the evening of her surgery to check in. In hindsight, Samantha resembled someone overdosing.

“She still couldn’t even talk to me…She was still dozed off at eight o’clock at night, about four hours after [her boyfriend] picked her up,” said Aliyah.

Negron FaceTimed with her daughter at around 11 p.m.

They both said “I love you” before hanging up.

Then, around 3 a.m., Negron’s phone rang. It was Santana’s boyfriend telling her that she wasn’t breathing. Negron threw on clothing and raced to her daughter’s home, where EMTs tried to revive her. They transported her to the hospital where she died.

Soon after, Negron and her younger daughter went to the Harlem location of Goals to demand answers.

“It’s like a club entrance where you go in the front and you have a host. There’s a girl with a nice body and pretty face and all-black outfit standing there. It’s a very shiny, glossy area,” said Aliyah.

After announcing herself as “Samantha Santana’s mother,” Negron said “the girl behind the counter started scrambling and ran into a room.”

Finally, a manager emerged and took them into a small office “to get us out of the lobby.”

The manager refused to hand over Santana’s medical records. Negron said her attorney was able to acquire them a few months later.

Within days of her death, someone from Goals called Santana’s phone to remind her of a massage appointment. Aliyah answered and told them her sister was dead.

“They put me on hold and then they came back and they said, ‘Oh, okay, I’m so sorry. We’ll just cancel all the rest of the appointments.’ And that was it.”

Except it wasn’t. A few days later, Aliyah received an automated text message saying they heard something had gone wrong with her surgery and to contact them.

“The way they’re promoting it on social media with discounts, [it’s] like you’re going to Bed Bath and Beyond. So it targets people who they know can’t afford the real deal,” she said.

Next month will mark the second anniversary of Santana’s death. Negron’s emotions run high when she thinks of her grandson Ryan, who is growing up without his devoted mother.

“It breaks me every time,” she said. “He just stares at pictures [of his mother]. And I just wonder what’s going through his little mind.”

While they can’t bring back Samantha, she and Aaliyah continue to speak out in the hopes that prospective Goals patients will do their research and understand the dangers of the procedure. They want to prevent further senseless deaths.

“She would want to save people. She did everything for everybody else. It was not about Samantha most of the time. It was all about everybody else,” said Negron. “And I know that she would have wanted this to get out there and just bring awareness.”