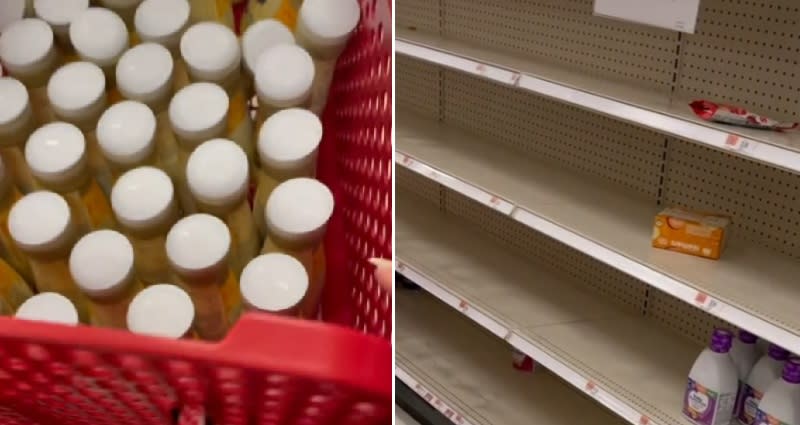 A baby formula shortage in the U.S. has now sparked a wave of panic buying, with some shoppers engaging in heated arguments to secure their supply.

In a viral TikTok video, a young mother can be heard confronting another shopper who had taken all the baby formula on display at a local Target store in Massachusetts.

“I have a child at home to feed and you just clear the whole [shelf],” Autumn Guyer says while filming the other woman.

Guyer points her camera at the woman’s cart — which is brimming with bottles of baby formula — as well as the empty grocery shelves they were taken from.

“You just cleared the whole shelf of all of this formula,” she can be heard saying. “You have a whole cart. Look at this, look at all this. Look at the shelves”

Guyer said she started recording after she asked the woman for one bottle of formula but was turned down. The woman argues, “This is for my baby.”

More from NextShark: Asian Women Get Spit on, Threatened With a Knife For ‘Bringing Corona’ to Australia

“You don’t think I need it for my baby too?” Guyer responds. She then tells the shopper that hoarders like her are to blame for the baby formula shortage across the country.

“This is the whole reason there’s a formula shortage,” she says. “You come and buy all the formula at once and there are kids who need formula today who won’t be able to get it because you just bought it to stock up,” she says as the woman begins to walk away. “That’s not your problem, right?”

The nationwide formula shortage has been ongoing for weeks, with many parents desperately trying to secure supplies from both online and physical retailers.

In February, a Michigan manufacturing plant was shut down after popular powder formulas produced from the site were linked to two infant deaths and other reported illnesses.

The issue made headlines and resulted in the recall of three large formula brands.

Following criticisms of alleged weeks of inaction, President Joe Biden recently invoked the Defense Production Action to speed up local formula production. Biden also approved the use of commercial aircraft and air cargo lines to assist in the importation of formula from abroad.

More from NextShark: Canadian Woman Refuses to Evacuate Wuhan and Abandon Her Cat