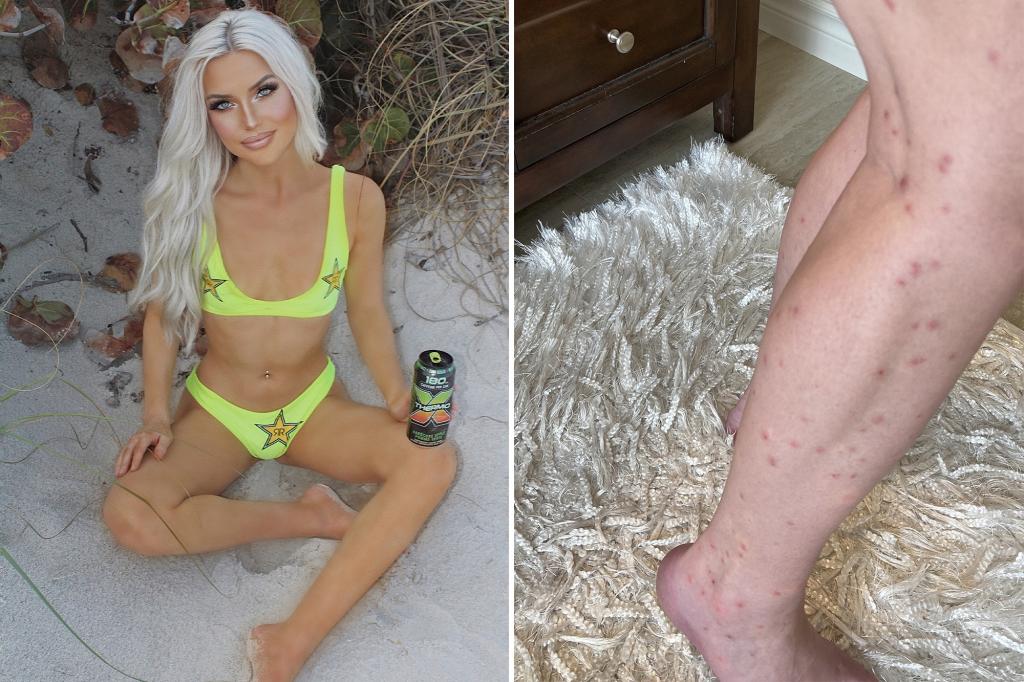 This bikini babe is buggin’ out.

While snapping hot swimsuit shots for her more than 32,000 Instagram followers, the platinum blonde bombshell was bombarded by a swarm of itsy-bitsy, bloodthirsty sand flies that left her entire body covered in itchy and unsightly red bumps.

“This itch isn’t just a normal mosquito or fly bite itch — it is like the type of itch where you just can’t stop scratching until you rip the skin and even though the skin is ripped, you can’t feel any pain because you’re that itchy,” groaned Gold, 25, to South West News Service.

“Not only did I get attacked by sand flies, I also got a kidney infection somehow,” she added.

On her birthday in February, the cyber siren from Ontario, Canada, escaped to a private beach in Melbourne, Florida, where she’d scheduled a saucy sundown photoshoot.

But she had no clue that a pack of pesky pests would be waiting to rain on her parade.

“I was there shooting content at sunset and I was changing in and out of bathing suits,” Gold said. “I had my beach bag up by the hedges, which is where the sand flies burrow.”

However, because the digital diva didn’t know much about the bitty bloodsuckers, she wasn’t immediately alarmed when she spotted tiny, dark dots all over her skin.

“I did notice while I was changing that there were little, black specks on me but I thought it was just sand because,” the pinup confessed. “To my knowledge, there were no mosquitoes in Florida.”

But when the intensely irritating itch from specks became more than Gold could bear, she decided to cut her trip short, rush back over the border and seek medical attention.

“[I] had to fly home early because I had no health insurance. I thought, ‘What could go wrong on a five-day trip?’” the internet influencer told SWNS. “Going to the doctor when I got back home to Canada, they were confirmed to be sand fly bites — not to be confused with sand flea bites. They are tiny, tiny, microscopic little black flies.”

The silver lining in Gold’s case was that the blotches from the bites didn’t appear on her skin until she returned to her native soil.

“I was bit on Feb. 18, which was actually my birthday!” she said. “The bites only came out on around Feb. 22 once I got home, which I was kind of thankful for because I had everything I needed to treat the bites here.”

And in the months since the attack, Gold is still riddled with scratches, scabs and scars from the teensy sand savages — even after attempting to heal her wounds with over-the-counter elixirs like Benadryl, Vicks VapoRub and Bio-Oil.

“I am recovering well, finally — just conquering the scars now,” claimed the centerfold.

In March, Gold attempted to conceal the remaining blemishes on her legs with a fake tan before posing in a series of photoshoots in Cuba; however, the faux-glow was no match for her displeasing pockmarks. Gold was forced to Photoshop the spots out of each picture.

She’s even scoured cyberspace, seeking answers to her derma-dilemma.

“While I was doing my own research, I did learn that if you do go to the beach, make sure that you’re going during the daytime when there’s a breeze and not the day after a storm, after it rains or when there’s no wind because that’s when they tend to come out,” Gold said.

And she claimed that her own biology may also be to blame for the buggy blitz.

The upset of her plague notwithstanding, the beachwear beauty doesn’t want her misfortune to cause others to miss out on any seasonal fun in the sun.

“Don’t let my experience in Florida ruin your spring break or any other plans because there were a lot of contributing factors as to why this happened to me,” she assured — emphasizing, however, to beware of the bug.

“I do want to send a warning to others during sand fly season — I wouldn’t wish that experience upon anyone!”