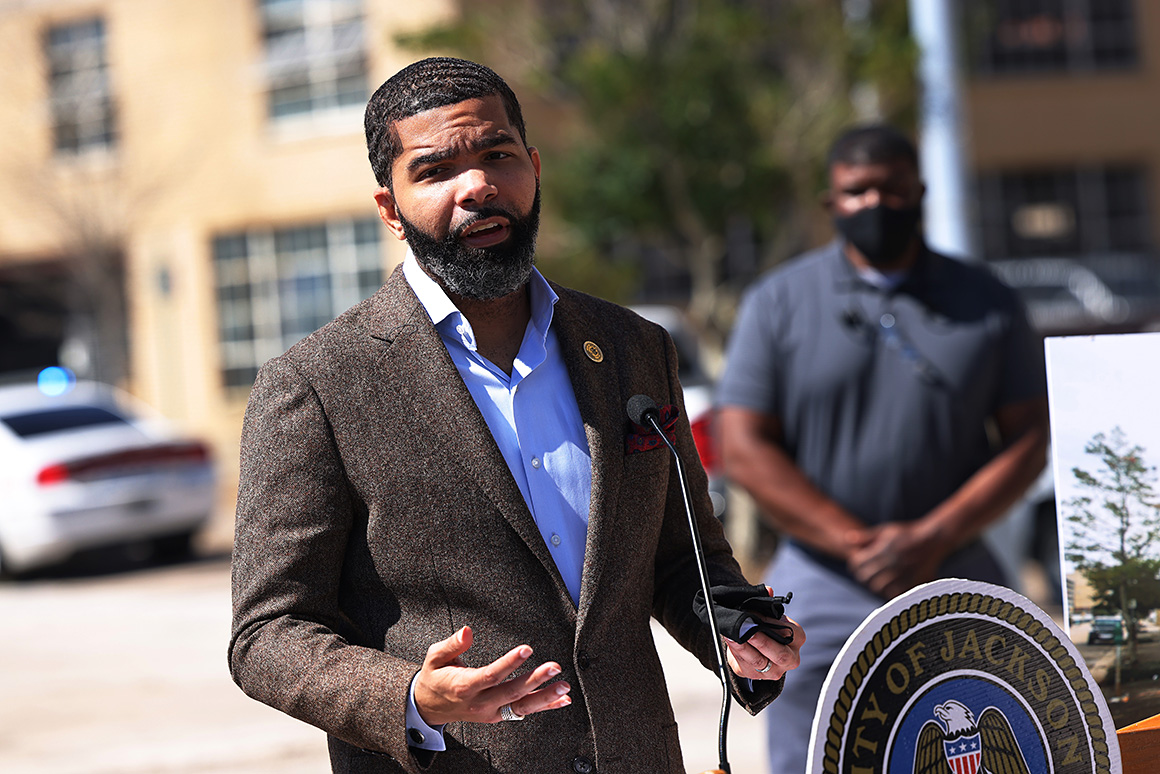 The crisis in Jackson spotlights the chronic problems plaguing the city’s water plant and whether federal funds through various avenues, including the infrastructure package, have reached the facility. Managers of both drinking water and sewage systems across the nation are eyeing infrastructure dollars to gird their facilities against flooding and more extreme storms.

Lumumba has said that while he welcomes incoming help from the federal government and state, the city has largely been forced to handle its myriad water problems alone (Greenwire, Aug. 31). For now, the city’s entire system is under a boil-water notice for consuming water or washing dishes, but the city has said water is safe to bathe in.

The mayor at a press conference yesterday pushed back on allegations that he and Mississippi Gov. Tate Reeves (R) held competing press conferences, claiming instead that they’re working together and outlining steps being taken to fix the plant.

“I’ve heard … the characterization that there are dueling press conferences between myself and the governor. That’s not how I would characterize it,” Lumumba said. “What we’re trying to do is present ourselves early and often.”

The crisis in Jackson has triggered an all-hands-on-deck approach from federal, state and local officials to address technical and staffing issues at the city’s water plants, even as questions swirl about the timing of those repairs and why problems have festered in Jackson for so long.

Appearing at a press conference with Reeves today, Lumumba said his participation was a “symbol of unity,” joking that some said the mayor and governor are “speed dating.” Reeves at the event also dismissed assertions of division.

“Those who want to drive division … there will be plenty of time for that in the future, but what we’re focused on right now is the immediate recovery from this emergency,” said Reeves.

At the conference, the governor also announced the creation of seven state-run water distribution sites.

The White House is also closely involved. President Joe Biden on Tuesday night issued an emergency declaration for Mississippi, opening the door for the state to get help and money from the Federal Emergency Management Agency.

And yesterday, White House spokesperson Karine Jean-Pierre laid out a laundry list of funding sources the beleaguered city can tap into, including $450 million set aside in the American Rescue Plan for the state of Mississippi, including $20 million specifically for water. Another pot of money, said Jean-Pierre, is $75 million through the bipartisan infrastructure law for the current fiscal year, as well as $429 million for the state over the next five years.

She also pointed to $30.9 million EPA has provided the city through state revolving funds, and $300,000 through the Biden administration’s Justice40 Initiative, which she said will support a study to reduce flooding from the Pearl River.

“As you can see, we’re committed, and we’re going to continue to help the people of Mississippi,” she said.

Yet environmental justice advocates have questioned whether the city of Jackson has received those funds and why problems at the water plant persist. Some members of Congress in the past have eyed earmarks to help the city, but faced challenges and delays (E&E Daily, March 5, 2021).

Lumumba said at the press conference that he had spoken with Biden and separately with Vice President Kamala Harris about the crisis, and that they had provided reassurances the infrastructure bill would help the city and that the focus on Jackson, with its economic and demographic makeup, is “prime and center” in terms of their vision and objectives.

Jackson’s population is 81.8 percent Black and 16 percent white, with a poverty rate of 26.9 percent, slightly higher than the rest of the state, according to the U.S. Census Bureau.

“Both assured me that the eyes of Washington are watching the city of Jackson. They wanted us to know that we should expect the full arm of support from the federal government in every way that they possibly can,” said the mayor.

“And they assured me their support was going to be demonstrated through long-range and long-term efforts through the EPA,” he added. “I was delighted to hear that call, it was very encouraging.”

As part of the coordinated federal response, EPA Administrator Michael Regan deployed federal staffers to the city to support an emergency assessment of the city’s water treatment plants. The agency also said it expected delivery of critical equipment to help repair the O.B. Curtis Water Plant.

Lumumba yesterday said city officials are sifting through EPA’s past findings around long-term challenges at the plant to see what should be prioritized, a plan that will soon be released.

“Part of that is, do we have the funding to move forward?” he said, calling discussions with the Biden administration “encouraging.”

A version of this report first ran in E&E News’ Greenwire. Get access to more comprehensive and in-depth reporting on the energy transition, natural resources, climate change and more in E&E News.