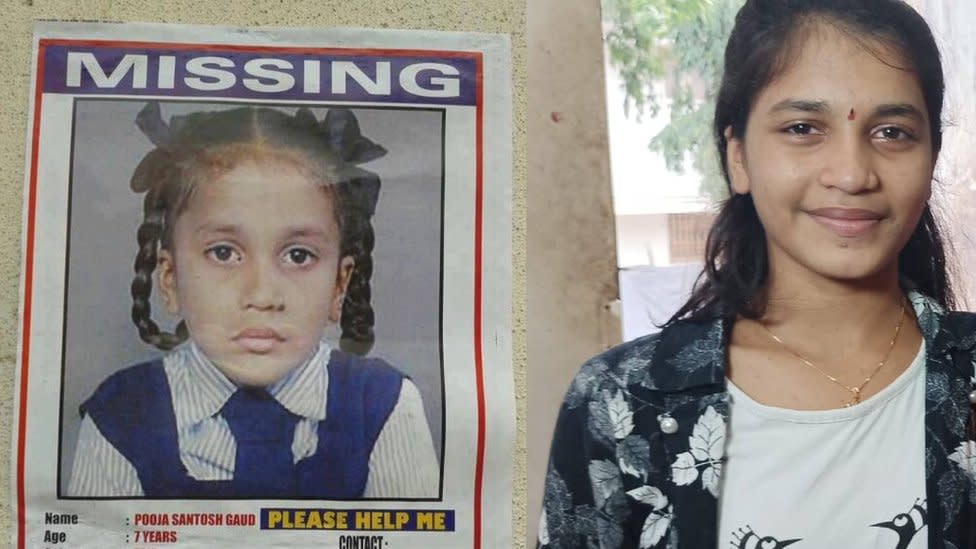 After nine long years, 16-year-old Pooja Gaud is finally able to rest her head on her mother’s lap.

Pooja went missing on 22 January 2013 when she was seven years old. She says she was picked up from outside her school in Mumbai city in the western Indian state of Maharashtra by a couple who lured her with an ice-cream.

On 4 August, she was found in what is being described as “a miraculous escape”. Her mother, Poonam Gaud, says she is over the moon with happiness.

“I had given up hope of ever finding my daughter. But the gods have been kind to me,” she says.

Police have alleged that the child was kidnapped by Harry D’Souza and his wife, Soni D’Souza, because the couple didn’t have a child of their own. They have arrested Mr D’Souza.

Before she went missing, Pooja lived with her two brothers and parents in a small house in a suburban slum area.

On the day she went missing, she had left for school with her elder brother, but the two had a fight and her brother went into the school leaving her behind as he was running late. That’s when the couple allegedly took her away, promising to buy her an ice-cream.

Pooja says that the couple initially took her to Goa and then Karnataka, states in western and southern India, and would threaten to hurt her if she cried or drew attention to herself.

She says she was allowed to attend school for a short while, but after the couple had a child of their own, she was pulled out of school and they all shifted to Mumbai.

Pooja says the abuse got worse after the baby was born.

“They would beat me with a belt, kick me, punch me. One time they beat me with a rolling pin so badly that my back began to bleed. I was also made to do chores at home and work in 12 to 24 hour-long jobs outside.”

The house where the D’Souzas lived was quite close to her family’s – but, she says, she was unfamiliar with the roads, was always watched and had no money or phone, and she couldn’t reach out for help or try to find her way home.

But one day, Pooja managed to get her hands on the couple’s mobile when they were asleep and typed her name into YouTube. She found videos and posters mentioning her kidnapping and numbers she could call for help.

“That’s when I decided to seek help and escape,” she says.

But it took her seven months before she could muster enough courage to discuss it with Pramila Devendra, 35, a domestic helper who worked at the same house where Pooja worked as a babysitter.

Ms Devendra immediately agreed to help her. One of the numbers on the missing poster connected them to Rafiq, a neighbour of Pooja’s mother. The mother-daughter first spoke on a video call and then a meeting was arranged.

Her mother says she checked for a birthmark only she knew existed on her daughter and on finding it, she was overcome with emotion. “All my doubts were immediately gone. I knew I had found my daughter,” she says.

Ms Devendra is happy to have played a part in this reunion. “Every mother should help a child coming to her for help. We might not be their biological mothers, but we are still mothers,” she says.

After the meeting, Pooja, a few family members and Ms Devendra went to the police station to lodge a complaint. “I told the police everything. I even told them where my kidnappers lived,” she said. This led to the identification and arrest of the accused.

Pooja’s return home has brought joy not just to her family, but to everyone who knew her. Neighbours who saw her when she was little have been dropping in to meet her.

Meanwhile, her mother is trying to make up for the lost time with her daughter – cooking her favourite food and combing her hair. The two try to spend as much time as they can together but life at the moment is tough for them.

Pooja’s father, who was the sole breadwinner of the family, died four months ago from cancer. So, her mother took up his job of selling snacks at a railway station to provide for herself and her three children. But the earnings are meagre and she’s struggling to make ends meet.

“Now I also have legal expenses. Our condition is such that if I miss a day’s work, we won’t have money for food the next day.”

Pooja is still processing her trauma. She gets nightmares and feels sad that she’ll never get to see her father again. For her safety, she spends most of her time at home or is accompanied by a family member when she goes out.

“I want to help my mother financially but I’m not allowed to. I also want to study,” she says.

But despite these problems, her mother says she couldn’t be happier. “Work is exhausting, but every time I see Pooja, I find my strength again. I’m just so happy she’s back,” she says.