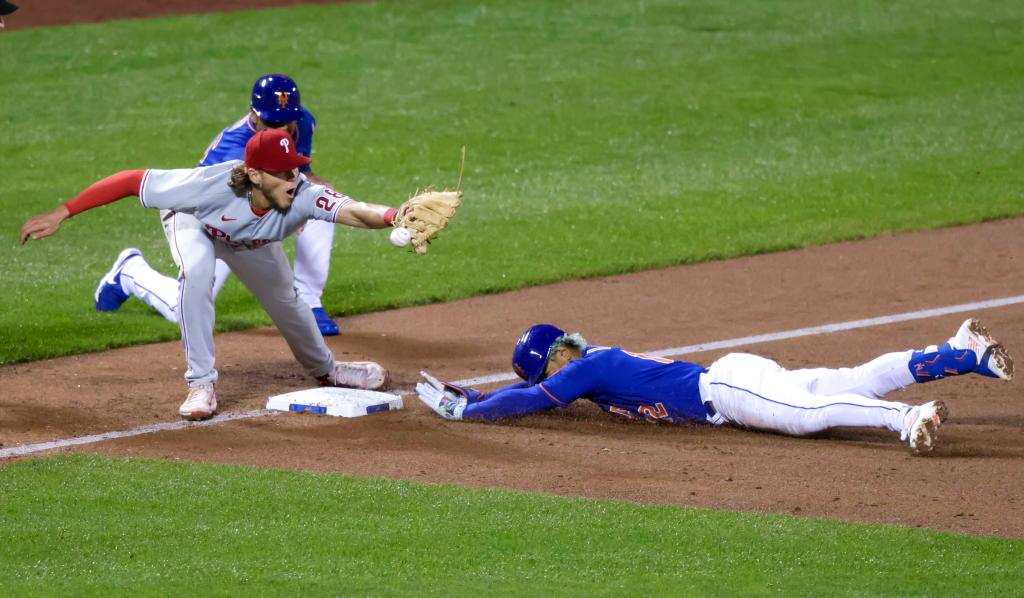 As any toddler could have reminded Francisco Lindor, you must learn to walk before you can run.

So, as Lindor sped around the bases and slid into third with a game-breaking two-run triple Saturday night in the Mets’ 8-2 victory against the Phillies, it should not be lost that his bat began to sizzle after he started to show better plate discipline.

Lindor drew just three walks in 93 plate appearances over 22 games from April 19-May 11. To no surprise, he hit .226 during that period. Since May 12, however, Lindor has walked 12 times in 71 plate appearances during a 16-game stretch in which he is hitting .309.

“I don’t really pay attention that much to numbers,” Lindor said. “For me, it’s swinging at the pitches I want to swing at and putting them in play. I wasn’t doing that earlier. The ones I don’t want, I’m staying away from those. That sums up everything that’s happening right now.”

The Mets had just surrendered a 1-0 lead by allowing two runs in the top of the fourth when Lindor led off the bottom of the inning in a sudden rainstorm. He fell in a quick 0-2 hole before laying off four straight pitches all over the zone — one high, one outside, one low and one inside.

“They are good hitters who get here, so they want to swing the bat and take advantage of the skill they have,” manager Buck Showalter said. “The pitchers know that sometimes, and it’s a constant battle to be selective.”

As the baseball adage says, a leadoff walk always scores: Pete Alonso followed with a single and Jeff McNeil clubbed a three-run homer.

“I think [Lindor] is seeing the ball extremely well, and that’s huge for this team,” McNeil said. “Leadoff walks, they can hurt you. Great at-bat by him.”

It was just the start of a big night for Lindor, who cut short a potential Phillies rally with nifty footwork around second base in the fifth. He scooped up a chopper that had bounced over the head of leaping pitcher Taijuan Walker, tagged the bag in rhythm and fired to first for the double play.

Lindor Hour continued when he smacked a 1-0 sinker to the base of the left-center field wall between two hesitantly converging outfielders in the bottom of the frame. He took advantage of Kyle Schwarber’s lackadaisical throw into the infield by turning on the jets for a head-first slide into third. Just like that, the Mets held a 6-2 lead and Lindor had a new career-long streak of six straight games with an RBI.

“There’s a great analytical stat we keep — damage in the zone,” Showalter said. “It’s really revealing that he’s been swinging at a lot of pitches in the white part of the plate.”

During the last 15 games, Lindor has 19 RBIs — overtaking the Dodgers’ Trea Turner for most among MLB shortstops this season (37) — and 18 runs scored. He capped his night with a line-drive RBI single, reaching base for a team-high 75th time on the season.

“Whatever it takes to help the team win,” Lindor said. “I’m contributing at the right time.”