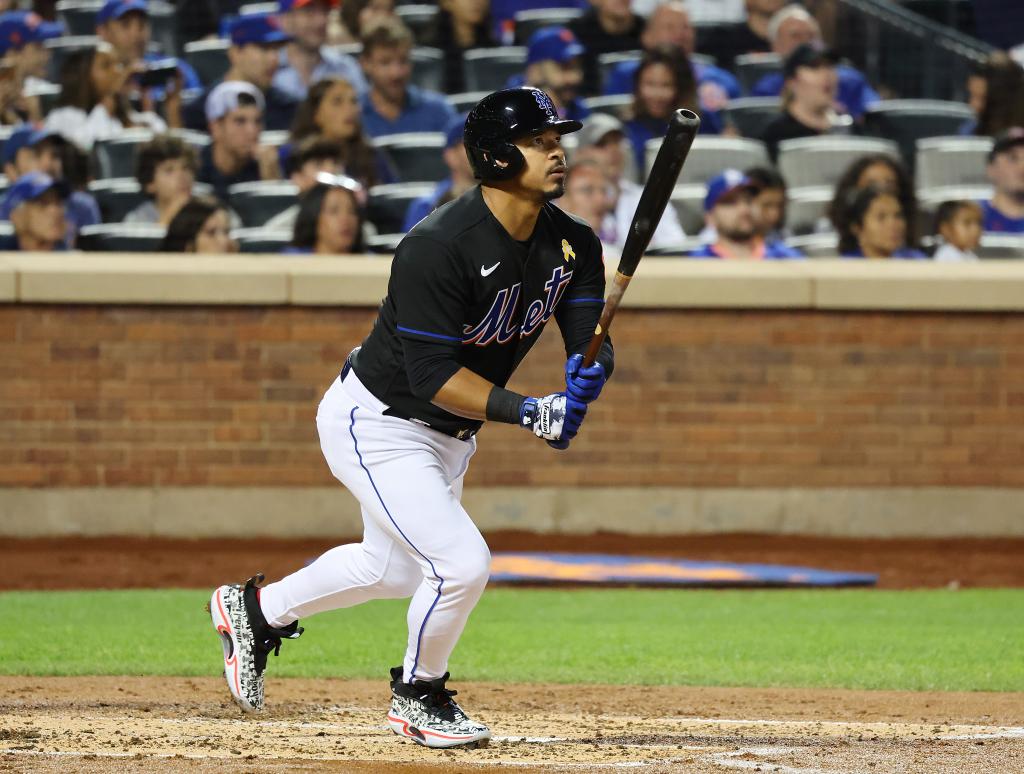 Eduardo Escobar should not have been playing Friday night. He had lost his starting spot (at least against opposing righty pitchers), first to Luis Guillorme, then to Brett Baty.

Yet injuries forced the struggling third baseman back into a temporary everyday role, which he took advantage of Friday.

Escobar drilled a home run to right field — notably from the left side — and added a sacrifice fly and walk, driving in three in the Mets’ 7-3 win over the Nationals at Citi Field.

If Guillorme or Baty had been healthy, either lefty swinger would have been playing. But Escobar, who is hitting just .207 against righties this season, stroked a two-run homer against righty Josiah Gray to give the Mets a second-inning lead.

“I know I have the potential to go out there and produce. I’ve been here for 10 years.”

“Here” is the majors, in which Escobar first established himself as an above-average player, then as an All-Star last year. The Mets gave him a two-year, $20 million deal, but Escobar has not hit as he has in the past, which led to a third-base platoon.

Escobar has never complained and said he would do whatever the Mets ask from him.

“Very quietly, in a time of need with Luis being down and Baty not available … he’s stepped up for us,” manager Buck Showalter said after Escobar slammed his first homer since July 26 and first lefty homer since July 13. “But that doesn’t surprise anybody.”

Escobar entered play in another slump, 3-for-20 in his past nine games. He and the Mets will hope he has found something.

“A game like today really helps a lot with a player’s confidence,” Escobar said.

There were no breaks for the Mets on Friday coming off a competitive and energetic series against the Dodgers.

The reliable top four of the order — center fielder Brandon Nimmo, right fielder Starling Marte, shortstop Francisco Lindor and first baseman Pete Alonso — were where they have been all season: in the lineup.

The Mets just won two of three from the Dodgers, who have run away with the NL West and will have the luxury of resting their stars down the stretch. The Mets, who are three games ahead of the Braves in the NL East, cannot begin coasting.

“We need to get to the playoffs first. No one’s assuming anything here,” Showalter said. “We’re trying to win games, and we monitor [workload] very closely.”

Lindor and Alonso each has played in 132 of the Mets’ 133 games this season. Nimmo has started in the Mets’ past 22 games, all in center field. Marte has played in the club’s past 21 games.

Showalter has leaned heavily upon Jeff McNeil, too, while the Mets’ other position players have been rotated in and out.

The Mets manager said he checks with his players every day to see if they need a breather, but he said of his core, “They want to play.”

Tylor Megill “feels good,” Showalter said, after beginning his rehab assignment Thursday with Double-A Binghamton. The former starter, who is being converted into a reliever, faced three batters for Somerset — the Yankees affiliate — and struck them all out.

Showalter said Megill will “take a day or two off” before his second rehab outing. The Mets want to see how Megill bounces back and whether he will be available for back-to-backs or as a multi-inning threat.

“That’s what we’re trying to get our arms around now,” Showalter said of the righty, who hasn’t pitched since mid-June because of a right shoulder strain.

Taijuan Walker partnered with The New York Foundling to give out tacos to fans before the game Friday.

“Tai’s Taco Truck” was accepting donations for The Foundling, which is one of New York City’s largest providers of foster care services.

In 10 appearances in August, Diaz allowed one run in 10 ²/₃ innings while striking out 16 and holding opposing batters to a .139 average.