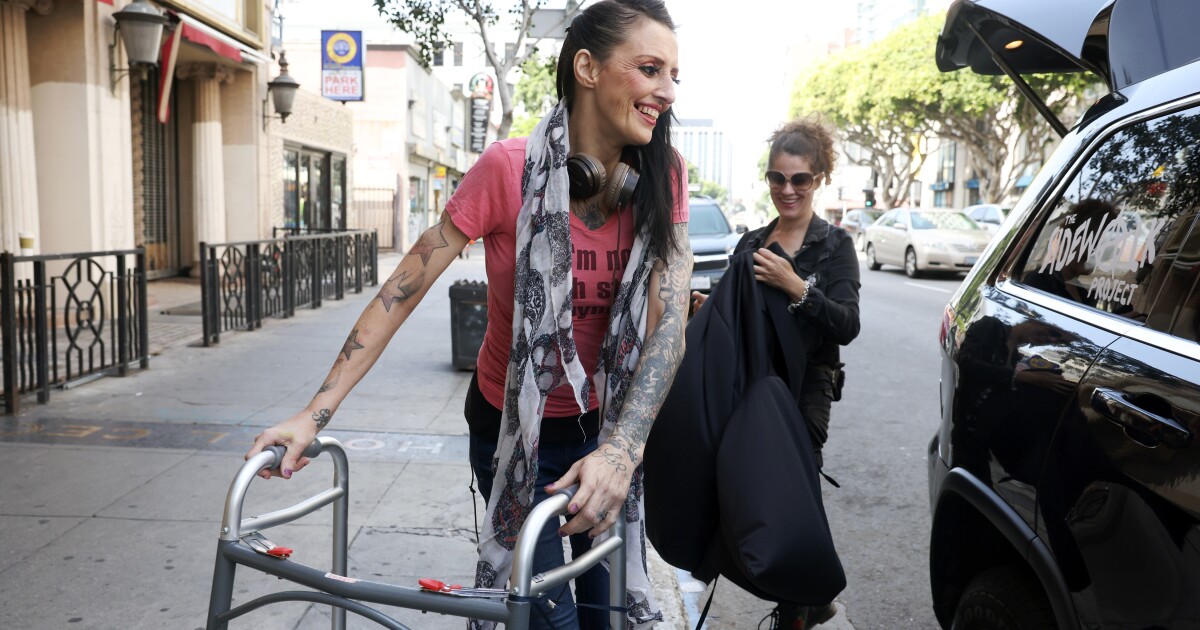 To shake off the grip of addiction, Loretta Elias tries daily to get to the unassuming clinic in Boyle Heights where she waits to down a meticulously measured cup of red liquid.

Methadone has helped the 42-year-old avoid the sickness and cravings that come with trying to kick opioids. Elias credits it with helping her to stop using fentanyl, the powerful synthetic drug that has driven up deaths among homeless people in Los Angeles.

But the Boyle Heights clinic is not an easy trip for Elias, who lives on the edge of skid row in the Cecil Hotel. She uses a walker and finds it painful to ride the bus because of a mending hip. So she relies on Soma Snakeoil, an artist and activist who heads a nonprofit, to drive her there daily in her Jeep.

“The hardest part is to get there,” Elias said. “Soma — she has so much to do and she goes out of her way to help so many people. But she is only one person.”

Skid row has long been the downtown zone where Los Angeles has shunted services for its most destitute. Yet when people like Elias want to try to wrench free from opioid addiction, the closest options for getting daily doses of methadone may be miles away in Boyle Heights, Westlake and South Park, according to federal and local directories. The VA also has a downtown clinic providing methadone treatment, but it treats only veterans eligible for its care.

“It’s a real challenge for my patients,” said Dr. Emily Thomas, deputy medical director of Housing for Health, a division in the L.A. County Department of Health Services. What health officials here have learned, she said, “is that you really have to bring healthcare services to people experiencing homelessness — and those who are formerly homeless — where they are.”

The gap is especially troubling, Thomas said, in an area that is “our overdose epicenter in Los Angeles County.”

Medications such as methadone, which dampen cravings and the pangs of withdrawal, have been a crucial way to help people escape opioid addiction, a mission that has only grown more urgent as deaths from drug overdoses have skyrocketed. Less than 12% of teens and adults with opioid use disorder said they had received medication to help them stop misusing opioids in the previous year, according to the 2020 National Survey on Drug Use and Health.

It’s “key to solving the opioid epidemic,” said Jason Kletter, president of California Opioid Maintenance Providers, a group that represents treatment providers across the state. “We know it works. We know that medication combined with counseling is really the gold standard.”

Methadone is not the only medication available to people trying to quit opioids: In L.A., Thomas and others at Housing for Health have sought to smooth access to Suboxone, which includes the prescription drug buprenorphine and is not as tightly restricted as methadone. The health services department has been doing monthly prescriptions with refills for people living on the streets — an easier option for many Angelenos than having to come into a clinic daily for methadone.

But buprenorphine is not the best option for everyone. For some fentanyl users, it can trigger a painful experience called precipitated withdrawal. Elias said she tried Suboxone but endured pain when providers had trouble gauging the right dose for her.

Soma Snakeoil is executive director of the Sidewalk Project, which assists unhoused people who use drugs, sex workers, and people facing crises with their mental or physical health. “We have so many people that want to be using methadone,” said the nonprofit leader, who goes by the same pseudonym she once used as a sex worker to destigmatize that part of her history. “But you have to drive to Boyle Heights or up towards Filipinotown” — and in skid row, people worry about leaving their tents.

“People are at risk of losing everything, every time they choose to leave the area,” she said.

L.A. health officials have long been frustrated by the lack of methadone treatment in skid row, but opening a new clinic isn’t a simple task. Methadone is “the most regulated area of healthcare,” said Dr. Brian Hurley, medical director of the Division of Substance Abuse Prevention and Control for the L.A. County Department of Public Health.

Hurley said that although the county can approve or deny contracts for methadone providers — and would welcome an eligible one in skid row — the location needs to be approved federally and by the state.

When methadone rules were first established, it was part of “the war on crime,” said Frances McGaffey, associate manager with the Pew Charitable Trusts’ substance use prevention and treatment initiative. “Those rules were not designed to meet the needs of people struggling with a behavioral health condition,” and the programs “were set up outside of mainstream medical care.”

Unlike in Canada or Britain, methadone cannot be prescribed at a typical clinic in the United States. It can be dispensed only by federally regulated opioid treatment programs that are required to provide counseling and do drug testing. Kletter said that in California, finding and licensing a site can take a year, and getting Medi-Cal certification once a provider is already operating can take additional time, “so you have all the costs of opening a facility, yet you can’t bill that program for some time … and you’ve got to front the costs of physicians, nurses, counselors and security.”

Seven years ago, a skid row clinic told The Times it was seeking state approval to dispense methadone there; it never got that approval and the clinic later closed, one of its physicians said.

Hurley said that as it stands, L.A. County doesn’t have any contracted providers for the treatment in skid row “due to the lack of contractors who have obtained the federal and state licensure to operate there” and existing providers not having “exercised their authority to set up a satellite clinic there.”

At the beginning of taking methadone, patients must generally come in daily to get their medication administered; patients who are deemed stable enough may gradually be allowed to take home a limited number of doses instead of arriving daily. Under federal regulations, patients had been required to be in treatment at least two years before becoming eligible to take home a monthly supply of medication.

Those federal rules were loosened somewhat during the pandemic, allowing more patients to take home a few weeks of medication at a time. Researchers have found that under the looser rules, patients were not significantly more likely to overdose or to stop adhering to the treatment.

But taking home methadone may not be an option for homeless people: Federal and state regulations require methadone providers to consider whether someone has a stable “home environment” and a safe way to store methadone before they can take it home.

The strict rules surrounding the treatment are tied to concerns about methadone — itself a synthetic opioid — being resold and misused to deadly effect. But amid the enduring crisis in overdose deaths, many experts have argued that regulations need to be eased to help more people get treatment.

Methadone treatment is difficult to access in many parts of the country, and “there’s a group of people that just don’t want to go to a methadone clinic. … How do we address this?” said Dr. Nora Volkow, director of the National Institute on Drug Abuse at the National Institutes of Health.

One option that is being researched is expanding methadone treatment to pharmacies and other physicians’ offices, she said. NIDA has also awarded a grant to a company that is developing a methadone tablet that releases the medication slowly over a week, so that patients do not have to take it as often, Volkow said.

BAART Programs, which runs the Boyle Heights clinic, has tried to improve access to methadone and other forms of opioid treatment by obtaining a state grant to operate the Boyle Heights location around the clock. Kletter, who is also president of BayMark Health Services— the parent company to BAART — said the company is working with L.A. County officials to bring more methadone services directly to skid row, possibly through a mobile unit that dispenses the medication.

Federal regulators reopened the door last year to starting more mobile methadone programs, which had been limited by a moratorium for over a decade. But mobile programs can be costly: Kletter said it can cost as much as $350,000 to buy and customize a van for methadone treatment. Another idea is to set up a shuttle to drive people from skid row to its existing sites a few miles away.

Guilt creeps in for Soma Snakeoil when she can’t eke out the time in her schedule to drive Elias, an errand that can stretch much longer if a line runs out the door at the Zonal Avenue clinic. She takes work calls and has held Zoom meetings in the parking lot. The two have tried, unsuccessfully so far, to get rideshares to the clinic covered by Elias’ health insurance.

“When we miss a day or two because of my schedule, then I feel like I’m really failing this woman … But I just can’t,” Soma Snakeoil said. “And I want to see so many more people have access, and I don’t have a van or time to pick everyone up.”

Elias traces her opioid use back to a rollover crash that left her in pain after she was discharged from the hospital. She started with heroin, then later switched to fentanyl. She was in a tent and ailing when Soma Snakeoil first met her years ago. The artist helped coax Elias to go to the hospital to get attention for a grisly wound and stayed with her all night.

Getting Elias into housing has been halting work, thwarted by her shaky health, an overdose that sent Elias back into the hospital, and a thicket of government bureaucracy, Soma Snakeoil said. Since Elias moved into an apartment at the Cecil, she has been taking methadone for a few months, riding to the Boyle Heights clinic and back whenever the nonprofit leader can take her.

She has been feeling better and regaining weight. Her wounds — which once were “so big you could put your fist inside them” — are healing.

“I’m doing things little by little,” Elias said in the Jeep on the drive over to the Boyle Heights clinic, “but it’s happening.”

Elias has been especially elated to reunite with her children and grandchildren. Her right arm is tattooed with stars representing each of her children. “Before, I was just telling my kids that I was going to change and do things different,” she said. “Now I’m actually getting an opportunity to show them that I’m really trying to get better.”

At the Boyle Heights clinic, Elias made her way in on the entry ramp, gripping her walker. She checked in at the reception window, then waited in line. When her turn arrived, Elias headed back to the small room where the medication is administered, recited her birthdate, then downed the cup as a nurse watched behind a clear partition. “Yuck,” she uttered.

In the back seat of the Jeep, riding back to the Cecil, Elias pointed to the offices of the L.A. County medical examiner. She had once been interested in mortuary science and was close to earning her degree in forensics, she said.

Now her goals are to stay off fentanyl. To keep seeing her kids and grandkids. To get her ID and Social Security card.

“I haven’t participated in the world for the last five years,” she said wistfully, gazing out the Jeep window.