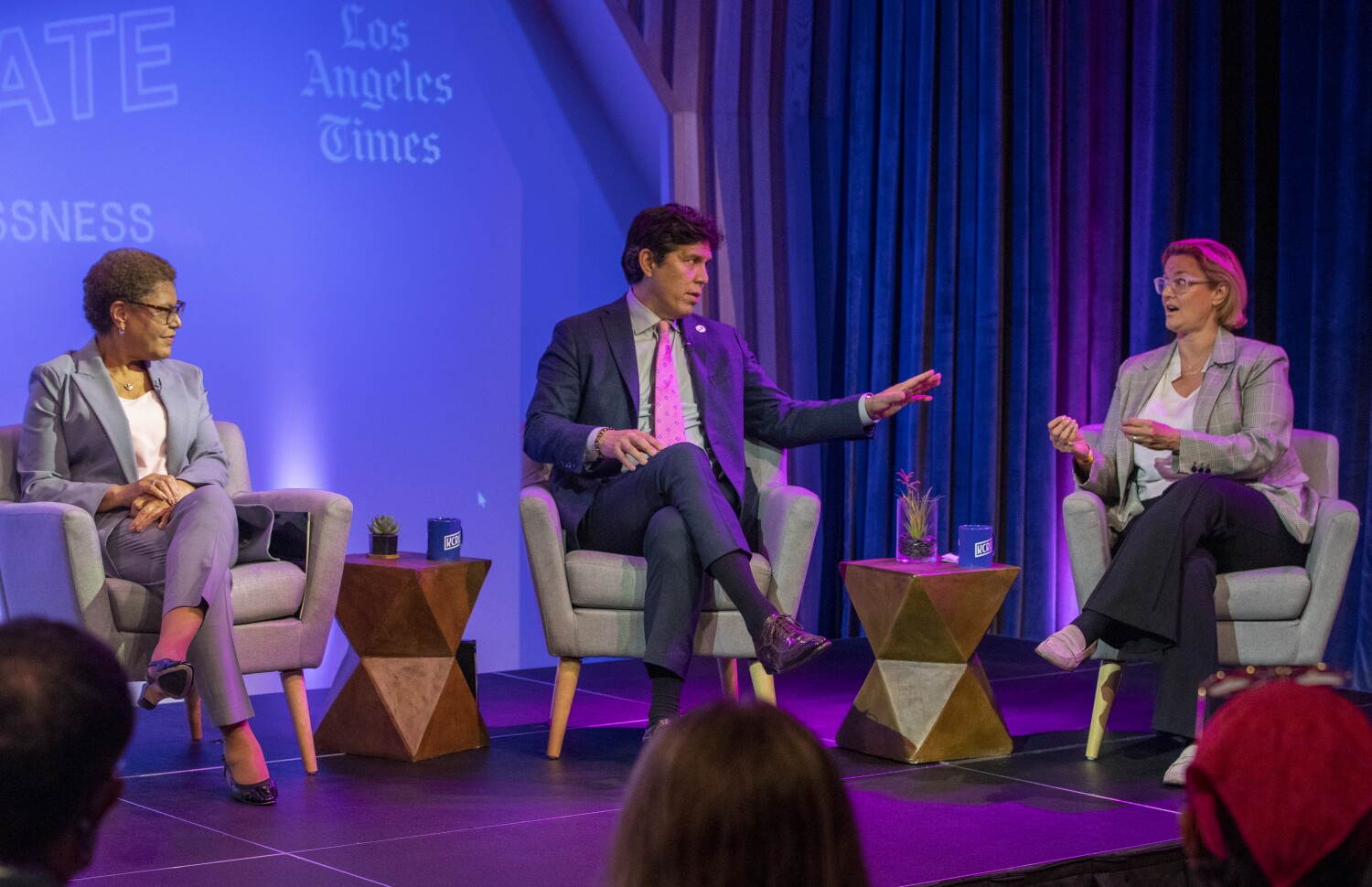 In the final group debate of the Los Angeles mayoral campaign, three candidates struck a more activist and progressive tone on the issue of homelessness on Friday night than in past encounters, with calls for strengthened rent control and a shift of funding away from police to housing and social services.

Progressive activist Gina Viola, participating in her first debate with better-known candidates, was largely responsible for pushing the debate into novel space — with her call for steering money away from the police to social services and for the city government to follow the example of squatters who took over homes in El Sereno, converting empty buildings into housing.

But U.S. Rep. Karen Bass (D-Los Angeles) and City Councilman Kevin de León also seemed intent on making clear that, despite many years in elected office, they also would not abide the status quo, with 29,000 people living on the streets of Los Angeles and more than 41,000 total without adequate housing.

“I’ve seen what our government can do when we want to,” Bass said. “We just finished building all sorts of accommodations for Afghan refugees in Qatar. Why can’t we utilize some of those resources here domestically? … I do think we need temporary housing, but we also need to build permanent supportive housing.”

De León concurred, saying that America had spent billions “to fund covert and overt wars all over … but we simply cannot find the money to house Americans here in the U.S. as well as California, in what is ground zero for homelessness nationwide.”

The leftward tilt of the debate also owed partly to who was not on the stage. Councilman Joe Buscaino, a former police officer, dropped out of the race earlier this month, taking with him his focus on enforcement. And real estate developer Rick Caruso — who has also focused strongly on the obligations of the unhoused along with the need for more homes — opted out of the debate, which was sponsored by KCRW and The Times.

Because the forum was not televised and did not include one of the front-runners, Caruso, it was unclear how much it would influence the outcome of the June 7 election. (If no candidate receives more than 50% of the vote, the two top contenders will face off in the November general election.)

Polls have put Bass and Caruso far ahead of the field, which narrowed considerably in recent days with the withdrawal of Buscaino and then City Atty. Mike Feuer. Buscaino threw his support behind Caruso, while Feuer backed Bass.

De León has trailed far behind the two leaders. Viola has polled in the low single digits.

Though no major new initiatives on homelessness were outlined, the candidates had some lively exchanges. One came when De León suggested that he would focus on adopting “inclusionary” zoning through the city, so that developers would have to build more units that were affordable to the working class and the destitute.

Market forces had not been enough to get affordable housing built and it will only come online if “we require a certain number of affordable units in projects,” De León said. “What I’ll do is mandate affordable housing. It’s just that simple.”

Bass said she agreed that zoning should be one tool but countered: ““I just don’t think that it’s enough at all to address the significant problem that we have.” She said she would work with leaders in Washington to expand the allotment of housing subsidy vouchers available to Angelenos and push to have land controlled by the city and other government agencies used for housing.

Viola called for more radical solutions, touting the idea of seizing properties that stood empty and turning them over to the unhoused. She said the city should use the power of eminent domain to take over such buildings.

“We have all of the housing stuff on the 710 Freeway that shame on the state of California has owned for decades and let sit empty. I mean, this is just outrageous,” Viola said.

As the pandemic came into full force in March 2020, a group of homeless and housing-insecure Angelenos broke into a tract of homes that had sat empty for years.

These residences had been seized by the state but were never demolished as part of a now-abandoned plan to extend the 710 Freeway.

In the ensuing two years, activists repeatedly tried to take over vacant homes in El Sereno in response to the region’s affordable housing crisis. The city responded by renting some of the previously vacant homes from the state as temporary residences for people.

There is also now a plan to redevelop the parcels of land — some which are empty, some which have derelict homes and some which are still occupied — into 252 new or rehabilitated homes or apartments alongside pocket parks and short hillside trails.

KCRW homelessness reporter Anna Scott, who moderated the debate along with Times columnist Gustavo Arellano, noted that eminent domain can be a long and costly process and wondered what more immediate solutions might be available.

Viola also said previous discussions about the homeless had not been broad enough because they have not talked enough about realigning the city budget, which she said amounted to “a moral document.”

She said that outsized spending on the police had come at the expense of too many other priorities. “That’s all that the city has prioritized,” Viola said, “over housing, over healthcare, over things that truly do keep us well and keep us safe. So that is something that needs to change.”

Viola, who runs a company that supplies temporary workers to other businesses, has called for the adoption of the “People’s Budget,” proposed in 2020 by a coalition of groups including Black Lives Matter-L.A., Ground Game L.A. and Sunrise Movement Los Angeles.

The plan calls for taking money from the Police Department and using it to hire more mental health counselors, gang intervention workers and other public employees who address trauma and try to prevent violence.

But it was De León, not the activist, who at one point called on Times owner Dr. Patrick Soon-Shiong to donate St. Vincent’s Medical Center, west of downtown, to help with the homeless crisis.

The subject arose when Bass said there were valuable facilities in the city that were not being fully utilized — citing St. Vincent’s as an example. She said that unnecessary government regulations limited to 16 the number of beds in the 344-bed facility that could be used for mental health and substance abuse patients. She said she knew that Soon-Shiong was willing to “lease” the hospital so it could be used for those needs.

De Leónchimed in: “The owner of that facility is the owner of the Los Angeles Times, a multibillionaire, who should actually be giving that piece of property.”

Soon-Shiong purchased the medical complex in 2020. He could not immediately be reached Friday night to comment on the exchange. But when Bass raised the issue previously, he said: “Medical care and mental health services are important issues in confronting the homelessness crisis and I am pleased that Congresswoman Bass is raising these concerns and looking for solutions.”

While Bass focused on her years in government and the work she said she had done to bring people together to find solutions, De León talked about the housing he had helped create in his district, which includes part of downtown.

He cited, in particular, the opening of a “tiny home” facility that is the largest in the country, saying the project had created safe spaces for people who had been on the street.

Viola responded by repeatedly calling the low-cost homes “tiny sheds,” saying they were smaller than some prison cells and had on occasion been the scene of sexual assaults.

De León objected, saying that the small structures were a huge step up for people who had been living in squalor on the streets.

“I wouldn’t characterize them as sheds,” De León said. “The reason why I say that is, for a human being who’s been living on the street every single day for years, if not for decades, it’s a godsend.”

Though Caruso decided to skip the discussion, he was not entirely absent.

Surrounding the livestream of the candidates and moderators online were banner ads featuring Caruso. When moderator Arellano announced that Caruso chose to be absent, he quipped: “He’s probably filming a television commercial somewhere.”