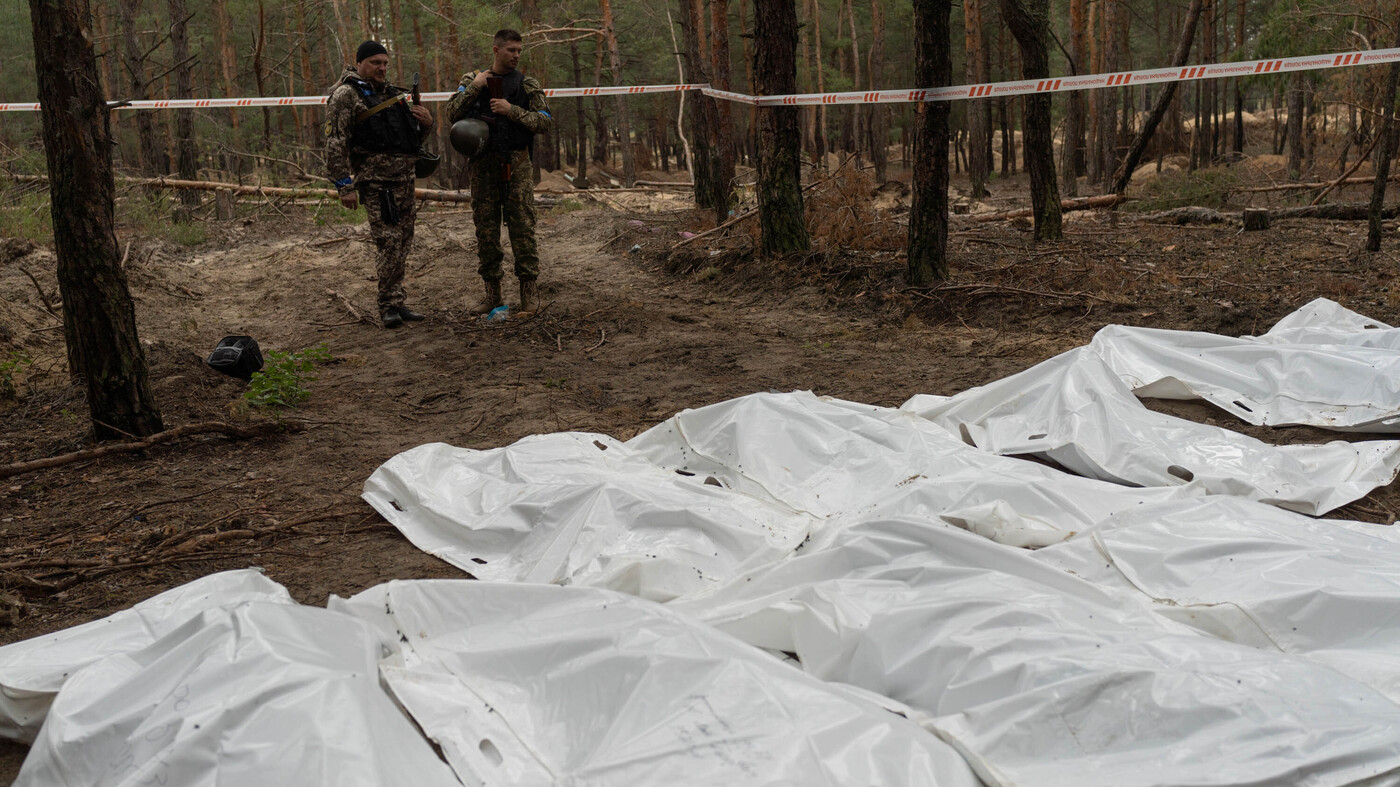 Ukrainian soldiers stand over bags containing the remains of exhumed bodies at a mass grave site in Izium, Ukraine.

Ukrainian soldiers stand over bags containing the remains of exhumed bodies at a mass grave site in Izium, Ukraine.

As the week begins, here’s a look ahead and a roundup of key developments from the past week.

What to watch this week

Russia’s war in Ukraine is the big topic at the United Nations General Assembly and a number of related events this week. Ukrainian President Volodymyr Zelenskyy’s prerecorded address happens on Wednesday, as does an in-person speech by President Biden. Russian President Vladimir Putin isn’t expected to attend or provide a video address, though his foreign minister will speak Saturday.

Also Wednesday, Ukraine’s prosecutor general is scheduled to testify at a U.S. House Foreign Affairs Committee hearing on accountability for atrocity crimes by Russia in Ukraine.

This week, Poland and the Baltic nations of Lithuania, Latvia and Estonia have begun barring most Russian travelers. There’s pressure on the rest of the European Union to follow suit but some members are resisting an all-out ban.

Sept. 12: The Kremlin acknowledged pulling back troops but insisted Russia would achieve all its military objectives in Ukraine, in its first public comments after Ukrainian forces recaptured large areas of the northeastern Kharkiv region. Ukraine now controls key cities including Izium.

The International Atomic Energy Agency announced the restoration of a second backup power line at Ukraine’s Zaporizhzhia nuclear power plant. That allowed the operator to keep a line in reserve while the other provided external electricity for cooling and other essential safety functions during shutdown.

A celebrated Ukrainian ballet dancer, Oleksandr Shapoval, was killed by mortar shelling. The 47-year-old had retired from the National Opera of Ukraine and was a college teacher when Russia invaded Ukraine this year, and he volunteered to help fight to defend his country.

Sept. 13: Russian President Vladimir Putin spoke by phone with German Chancellor Olaf Scholz. The German leader pressed Putin to end the war, withdraw Russian troops and ensure the safety of the Zaporizhzhia nuclear plant, according to the Chancellor’s Office. Putin spoke of a need to unblock Russian exports like foodstuff and fertilizer, according to the Kremlin.

United Nations Secretary-General António Guterres spoke with Putin about Ukrainian grain exports, later telling reporters: “We are far away from the end of the war.”

Sept. 15: Putin said China’s leader Xi Jinping had questions and concerns about the situation in Ukraine but said he appreciated Beijing’s “balanced position” on the issue, as the two met in Uzbekistan.

The State Department imposed new sanctions “on key Russia-installed authority figures in Ukrainian territories currently controlled by the Russian military, and on 31 defense, technology, and electronics entities, to further constrain Russia’s advanced technology industries and their contribution to Russia’s defense industrial base.”

Sept. 16: Ukrainian authorities found a mass burial site near in a forest outside Izium, one of the northeastern cities that Ukraine took back from Russian forces earlier this month.

The U.N. General Assembly voted in favor of allowing Ukrainian President Zelenskyy to submit a prerecorded speech for the following week’s gathering. Countries that voted “no” were Belarus, Cuba, Eritrea, Nicaragua, North Korea, Russia and Syria.

Sept. 17: Pope Francis’ representative in Ukraine, Cardinal Konrad Krajewski, came under fire while delivering humanitarian aid near the city of Zaporizhzhia. He was not injured.

The Czech Republic, current president of the Council of the EU, called for an international tribunal after Ukraine said it found evidence of civilians were tortured in Izium.

Russia has been using Iranian-made drones to cause serious damage in Ukraine, as The Wall Street Journal reported, citing Ukrainian commanders.

Sept. 18: Russia’s beloved pop singer Alla Pugacheva spoke out against the war. In an Instagram post, she said she stands in solidarity with her husband, comedian Maxim Galkin, who she said “wants an end to our boys dying for illusory goals.” She said the Justice Ministry should add her to the same “foreign agents” list where it had put Galkin’s name.

Outside a liberated Ukrainian town, inspectors search for evidence of war crimes.

Russia’s invasion of Ukraine to be the main topic at annual U.N. General Assembly meet.

What to know about Xi Jinping meeting Vladimir Putin, as the Ukraine war looms large.

How freaked out should we be about Ukraine’s nuclear plant?

Russia insists it’s working toward goals in Ukraine, even after troops retreat.

A former national security official explores what could be next in the Ukraine war.

Russia’s war in Ukraine is changing the world: See its ripple effects in all corners of the globe.

You can read past recaps here. For context and more in-depth stories, you can find more of NPR’s coverage here. Also, listen and subscribe to NPR’s State of Ukraine podcast for updates throughout the day.