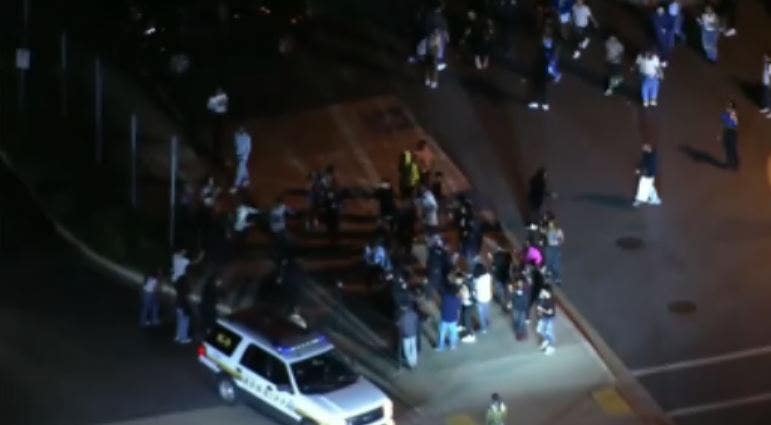 Football is temporarily suspended at two Maryland high schools after a large brawl broke out during a game Friday night, leading to additional fights with injuries.

The Gaithersburg Trojans were hosting the Northwest Jaguars when players on the field began fighting during the third quarter, FOX 5 DC reported. Officials ended the game early and declared Northwest, who was up 14-0, as the winner. Both schools are in the Montgomery County Public Schools district.

In a Facebook post, Gaithersburg police said officers from their department and Montgomery County police responded to a call reporting a fight at the high school around 8:23 p.m.

While officers were addressing the fight on the field, school officials said there were “several scuffles” involving a few students outside the stadium.

TEXAS HIGH SCHOOL FOOTBALL BRAWL ENDS WITH EVERYONE GETTING EJECTED

The fights resulted in a few injuries and several arrests, according to Gaithersburg police. One school staff member was treated by medical personnel for a non-life-threatening injury and one victim was treated for cuts.

An unidentified officer was also assaulted during the incident, but reportedly did not require medical care.

Montgomery County police said a person armed with a knife was taken into custody as well as “a few individuals” believed to be involved in the fights. Authorities said all will be charged accordingly.

John Harvill Stadium at Gaithersburg High School in Maryland a day after a large brawl broke out during a football game.
(FOX 5)

“Montgomery County Public Schools (MCPS) strongly condemns the abhorrent and unacceptable behavior that occurred at the football game last night – on Friday, September 16, 2022 – between Northwest and Gaithersburg at Gaithersburg High School.  The district is swiftly moving to develop and implement enhanced measures for safety at any athletic event and will communicate those to our community in the coming days.

“As agreed upon by MCPS and both schools, all football operations at those two schools will be suspended temporarily, to assist in the ongoing investigation. The district will pursue disciplinary actions against any individuals who are found to have participated in this large altercation, while working to bring communities together around the importance of upholding safe and respectful environments.”

A specific date related to the restoration of the two football programs was not given.