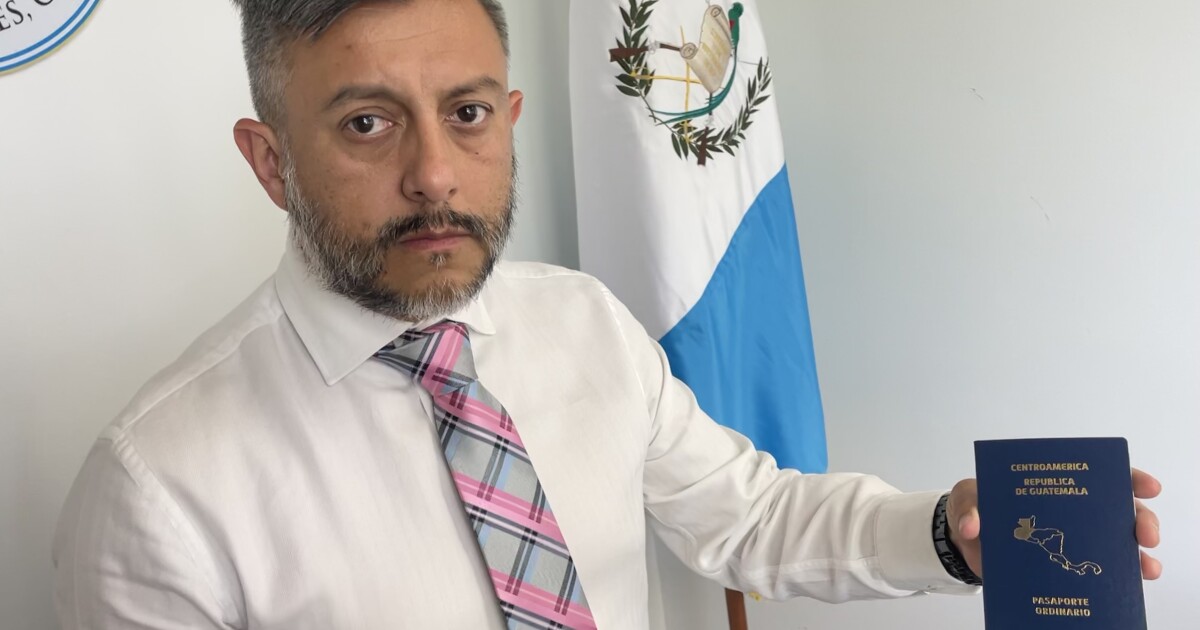 An immigrant from Puerto San Jose on Guatemala’s southern coast, González would like to give an earful to his country’s president, Alejandro Giammattei, about the interminable delays that many Guatemalans have in obtaining passports from their homeland. It’s a problem, he says, that can’t be put off any longer.

“I would like to have the opportunity to speak with the president directly and tell him to his face everything that is happening,” González said while waiting in a long line snaking up to the Guatemalan Consulate on Riverside Drive in Los Angeles, near the intersection of the 2 and 5 freeways.

He’d gone there one sun-blasted July day to inquire into the mysterious whereabouts of his passport. Activists and others point out that passports provide immigrants not only with an essential travel document, but with a universally accepted form of identification for dealing with immigration procedures, filing tax returns, buying homes and cars, applying for loans, and making purchases on credit, among other services.

Passports also make it easier for immigrants to send remittances, a significant source of financial support both for loved ones in their home countries and of revenue for foreign governments like Guatemala’s.

“I came to request it in April and we don’t know if it’s going to be ready,” González said. “Here, they are not really fulfilling their responsibilities with the Guatemalans. All the people, if you talk to someone, they will tell you the same thing. They don’t even call you if the document is ready.”

That same afternoon, Sonia Chilel held a receipt verifying that her passport had been processed on Jan. 26. But when she returned to the consulate in late April, she was told that it hadn’t been processed, she said. The native of Malacatan, near the Guatemala-Mexico border, had come back to check again.

“It is very important that this problem get resolved, because there are people who miss a day of work to come and get the papers, and then they tell us that we have to come back another day,” said the East Los Angeles resident.

According to the Pew Research Center, in 2017, 1.4 million people of Guatemalan descent lived in the United States, of whom 60% were U.S. citizens or naturalized citizens and 33% were born on Guatemalan soil. An estimated 270,000 Guatemalans and people of Guatemalan ancestry live in metropolitan Los Angeles, the nation’s largest such community.

The delays in passport deliveries started with the pandemic, but the problem worsened when the Guatemalan Migration Institute suffered a shortage of the books used to print passports. The L.A. Guatemalan community has grown outraged over a situation that has left many immigrants with no easy proof of identification. Particularly for those with no fixed immigration status — the “doubly undocumented” — that’s an economically and legally dicey position.

“The authorities do not understand. They haven’t been in our shoes,” said Lety Barán, president of the Asociacion Primaveral, a nonprofit organization that supports migrants and their families in the Washington, D.C., region and in Guatemala.

Marvin Otzoy, 51, thinks that Guatemalan government officials who make decisions from the comfort of their offices are unaware of the odyssey that their countrymen go through to obtain a passport, especially those like him who don’t live near a consulate. A native of the province of Chimaltenango in central Guatemala, Otzoy since 2000 has lived in Reno in northern Nevada, an area that he estimates is home to about 3,000 Guatemalan families. They have to drive four hours to San Francisco or nine hours to Los Angeles, where the two closest consulates are located.

“Recently there was a mobile consulate here, after three years of not coming,” said Otzoy, who is president of the eight-year-old Guatemala Fraternity of Northern Nevada. He said it would be a great relief to have a consulate in Nevada, possibly by relocating one in San Bernardino that serves fewer clients than its Los Angeles counterpart.

“The passport is not something luxurious, it is something basic, it is a right,” Otzoy added.

Guatemala’s passport printing has been managed by different agents in recent years. From 2012 to 2015 it was handled by a private company based in Miami. Then the immigration authorities in Guatemala took over the procedure — collecting applicants’ information, printing passports and distributing them through consulates in the United States. In 2018, the government established printing centers at nine of the consulates, which now print the passports that are distributed at all 23 consulates.

In the last decade, various crises have slowed or halted the delivery of Guatemalan passports. The longest occurred in November 2012, when an expired contract with another passport-processing company caused a delay of 5,000 passports being sent to the L.A. consulate. The current crisis dates to the outbreak of the COVID-19 pandemic in March 2020, which eventually led to the 23 Guatemalan consulates in the U.S. issuing documents only in emergency cases. Since June 2021, most applicants have had to wait at least several months for passports to land in their hands.

“It is a crisis that has become national and international,” said Andrea Villagrán, a Guatemalan congresswoman who serves on the Foreign Relations Commission of the Guatemalan Parliament.

At the start of this year, there were 40,000 Guatemalan passports pending delivery. Then the Guatemalan Migration Institute ran out of the notebooks that are used for passports. In recent weeks, to resolve the backlog, the agency has sent out two batches of notebooks, a total of 70,000.

“In the government of President Alejandro Giammattei, we are very concerned,” said Stuard Rodríguez, who became director of the migration institute last year after the previous director, Guillermo Díaz, was removed due to “corruption alerts,” according to the Giammattei government.

“It has been a delay that was complicated for all of us due to the issue of the pandemic,” Rodríguez said in an interview. “We have passports; we are sending passports,” he added, but did not specify a date when he expected that all consulates would have enough notebooks to meet the demand.

“What is happening is that it is simply patching up, the problem persists and the deficit is increasing,” said Batres, president of the Migrant Network, an organization that represents the Guatemalan diaspora in 31 states of the United States, Canada, Mexico and Spain.

Immigrants and activists say the passport delay is not only harming immigrants in the United States but choking off a vital source of assistance to relatives in Guatemala. In 2021, more than $15 billion was sent from the United States to Guatemala, a 34% increase over the $11 billion sent in 2020.

Critics say that high-level officials at the Ministry of Foreign Affairs must step up to resolve the crisis, and fast.

Cristhians Castillo, an analyst and researcher at the Institute of National Problems of the University of San Carlos, said that, after enduring a year of this crisis, the responsible authorities should have found an effective process.

“It is a problem that is exacerbated by the limited capacities of the officials who have been appointed to lead the institutions, in this case the [Guatemalan Migration Institute],” Castillo said.

“The call would be to the president to pay more attention to the ministries, to realize that they voted for him not to go for a walk,” said Rosa Posada, advisor of the Union of Guatemalan Emigrants in Los Angeles.

“We demand that you solve the problem of issuing passports,” she added.