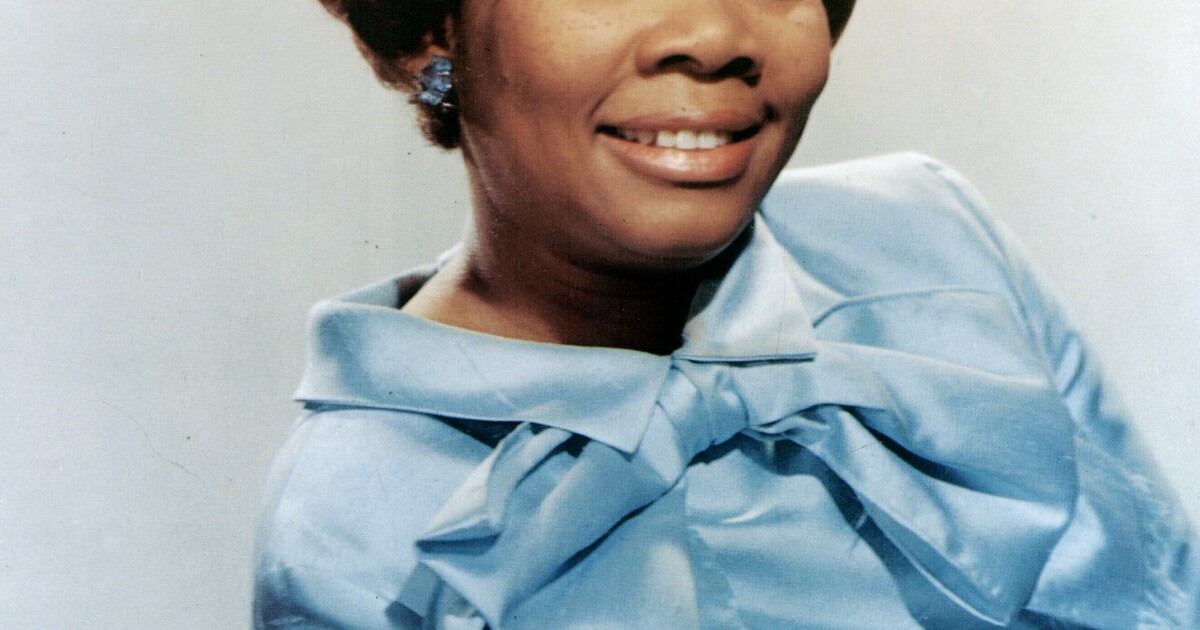 One of the first women signed by Motown. Part of the stable of early-day artists at legendary Stax Records. A longtime backup singer for Ray Charles. A hard-driven advocate for those who lived on the streets of L.A. A movie actress late in life. A mystery writer whose protagonist was an aging blues singer with a thing for unsolved crime.

That Mable John could pack so much into 91 years of life was a remarkable testament to her energy, curiosity and generous heart. She was as comfortable sharing the stage with Billie Holiday as she was wading through the crowds that gathered for her annual “homeless” Christmas party in Westchester.

And somewhere along the way she earned a doctorate in divinity and became a minister, her stage presence and booming voice serving her well from the pulpit.

Still active in the community until late in life, John died Aug. 25 at her home in Los Angeles. No cause was given. She was 91.

The oldest of 10 children, John was born in 1930 in Bastrop, La., a former Confederate stronghold west of the Mississippi River. As her father sought a better job, the family moved to Detroit, where she was encouraged by her musically inclined parents to sing in the family’s Pentecostal church, though she said she was later booted from the choir when the church objected to her interest in the blues.

“They disapproved of the music. I had gone over to the devil. They told me that by going out into the world, I was going back on everything I’d been taught,” she told the Guardian in 2008. “So I just found another church.”

Her fate turned when she went to work at an insurance company owned by the sister of Barry Gordy, then a young hustler who was trying to break into the music business by pitching songs to local DJs and record store owners. Since he didn’t drive or own a car, John became his chauffeur, ferrying him from radio station to radio station.

John said she encouraged him to launch a label that would focus on Black musicians. Interested, Gordy turned his garage into a recording studio and hung a big sign that said “Hitsville U.S.A.” No sense in being modest, he said.

Within a few years, the company he called Tamla, and later Motown, was churning out chart-busting songs: “Shop Around,” “Please Mr. Postman,” “I Heard It Through the Grapevine,” “Where Did Our Love Go?” and hundreds of other new tunes. One of his first signings was John, who had performed with Holiday and Ella Fitzgerald. She became the label’s first solo female artist.

Though initially overshadowed by her younger brother, Little Willie John, an R&B artist who reached the top of the charts with his hit song “Fever,” John had modest success in 1960 recording several of Gordy’s songs, including “Who Wouldn’t Love a Man Like That” and “Actions Speak Louder Than Words.”

John eventually concluded that her soul-drenched voice and interest in the blues wasn’t a fit at Motown, which was leaning toward pop music with mainstream appeal. So she headed to Memphis and signed on with Stax, where she landed a Top 10 hit with “Your Good Thing (Is About to End)” in 1966.

“When I went there, I was assigned to Isaac Hayes and David Porter. They’d never met me and didn’t know what I looked or sounded like. … When I sat down with them, they said, ‘Let’s get acquainted first.’ They asked what kind of life I had, what was on my mind. They turned their attention to whatever emotion I was feeling. Stax wanted you to be you.”

Two years later, she went on the road with Ray Charles and took over as the lead singer for his backing trio, the Raelettes. It was a collaboration that lasted nearly a decade and a friendship that continued until his death in 2004.

Spiritual since childhood, John eventually set aside secular music and headed to L.A., where she taught Bible classes and established a ministry, Joy in Jesus Ministries. In 1992, she earned her divinity doctorate at the Crenshaw Christian Center. She also founded the Joy Community Outreach, a charity that provides food and clothing to hundreds of impoverished people and became known for her annual Christmas party for those without housing.

Actresses Sharon Stone, Whoopi Goldberg and the late Valerie Harper were among those who supported her group.

“A lot of these people are hard street people. They’ve given up on life. Living on the streets, where everything they get they either have to steal or beg for, breaks them down. It takes their pride and self-esteem away,” she told The Times in 1996. “You’d be surprised what it does to a person, never to be able to lie down in a bed.”

Well into her 70s, John made her film debut in 1977 when director John Sayles tapped her to play the role of an aging blues singer alongside Danny Glover in “Honeydripper.” She also co-wrote a series of thrillers involving a spiritual detective named Pastor Albertina Merci who solves crimes that have left police flummoxed.

In 2007, she appeared with Hayes, Lalah Hathaway and Angie Stone at the Hollywood Bowl for the 50th anniversary of Stax.

Asked where she found the time and energy to stuff so much into her life, John was succinct.

“Some days, when people are telling me how busy I am, I sit down to think about it and I get tired.”

John’s survivors include two sons, Limuel Taylor and Paul Collins; a daughter, Sherry Archar; a grandson and three great-granddaughters. She was preceded in death by her husband, Samuel, and three sons, Joel, Jesse and Otis. Her brother Little Willie John died in prison in 1968 while serving time for manslaughter. He was posthumously inducted into the Rock & Roll Hall of Fame in 1996.