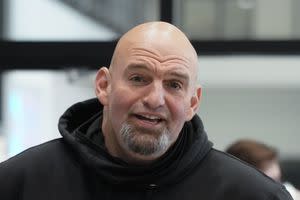 Pennsylvania Lieutenant Governor John Fetterman suffered a stroke on Friday, according to a statement released by Fetterman in the hospital.

“I hadn’t been feeling well, but was so focused on the campaign that I ignored the signs and just kept going,” Fetterman said in the statement. “On Friday it finally caught up with me. I had a stroke that was caused by a clot from my heart being in an A-fib rhythm for too long.”

Fetterman said the doctors were able to quickly remove the clot and reverse the stroke and get his heart under control.

“It’s a good reminder to listen to your body and be aware of the signs,” Fetterman said.

Fetterman said his campaign for U.S. Senate is not slowing down.

“Our campaign isn’t slowing down one bit, and we are still on track to win this primary on Tuesday, and flip this Senate seat in November. Thanks for all the support, and please get out there and vote,” he said.

Fetterman is still in the hospital for observation at this time.

State Rep. Malcom Kenyatta, who is running against Fetterman for the open seat in the U.S. Senate, issued the following statement:

“As I said at the first debate, John Fetterman is an incredible family man. My prayers are with him and his family as he recovers from this stroke. I look forward to seeing him back on the campaign trail soon.”