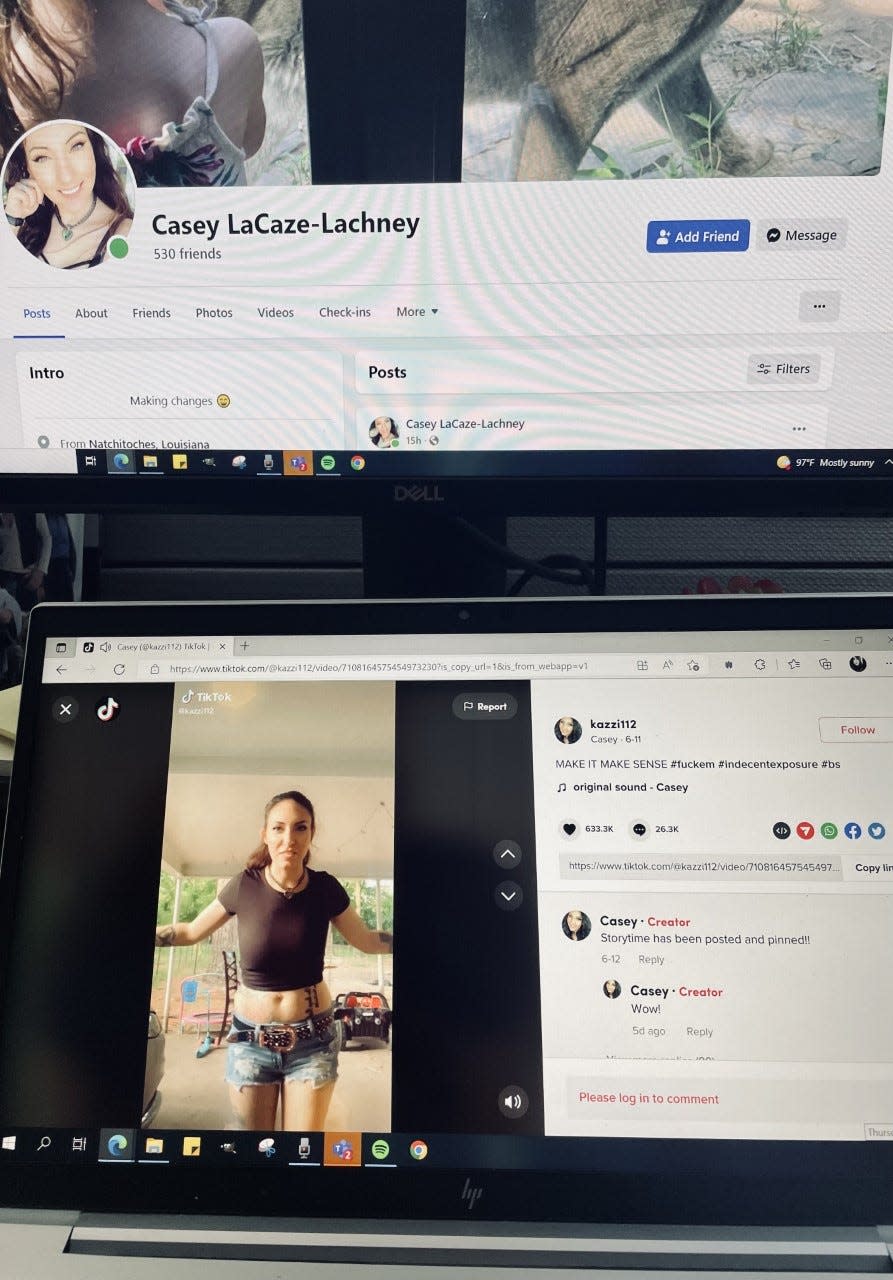 This story has been updated to include a statement from Casey LaCaze-Lachney.

A Winnfield, LA woman’s TikTok video has gone viral after she took to the app to complain about an indecent exposure citation she received at a festival on Saturday, June 11.

Casey LaCaze-Lachney, known on the app by her username @kazzi112, posted about the incident where it has received more than 2.6 million views. LaCaze-Lachney captioned the video “make it make sense” before showing viewers the outfit in question.

LaCaze-Lachney is shown wearing a black t-shirt that covered her shoulders and was cropped just above the belly button, paired with cutoff denim shorts and a studded belt.

In the video LaCaze-Lachney states “All of my bits are covered. Are you kidding me? At a family event where there’s alcohol being literally handed out for free and three female cops came up to me and gave me a ticket.”

“Recent posts to social media have had a negative impact on the service of our police officers during this family fun-filled festival. An unnamed citizen was cited for a city ordinance and has since taken to a popular social media site, blasting police officers. However, 3 female officers responded to various complaints about the person’s attire and the person of interest was issued a citation under the city ordinance.”

According to the Winnfield Police Department’s post, the fines range from $25 for a first offense to a maximum of $300 and the person may be ordered to perform up to 40 hours of community service.

“We, as public servants, will not engage in a social media war with anyone or any organization as it is improper and brings discredit upon this department,” stated a department spokesperson on the Winnfield Police Department’s Facebook post. “We also cannot comment on details of any case under investigation or pending court action.”

Since the viral video, LaCaze-Lachney has posted two updates on TikTok explaining in more detail what happened and stated that she was looking for legal representation.

“I moved here in October and don’t know the officer that approached me,” said LaCaze-Lachney. “I did feel targeted. I was not informed about complaints at the time of the citation so it’s unclear if it was actually driven by the community or if it was just the officers acting alone. I second guess everything I wear in public now.”

To see the original videos and the updates, check out LaCaze-Lachney’s TikTok page and to see the full statement from the Winnfield Police Department visit its  Facebook page.

Meredith G. White is the arts and culture reporter for the Shreveport Times. You can find her on Facebook as Meredith G. White, on Instagram and Twitter as @meredithgwhite, and email her at [email protected]