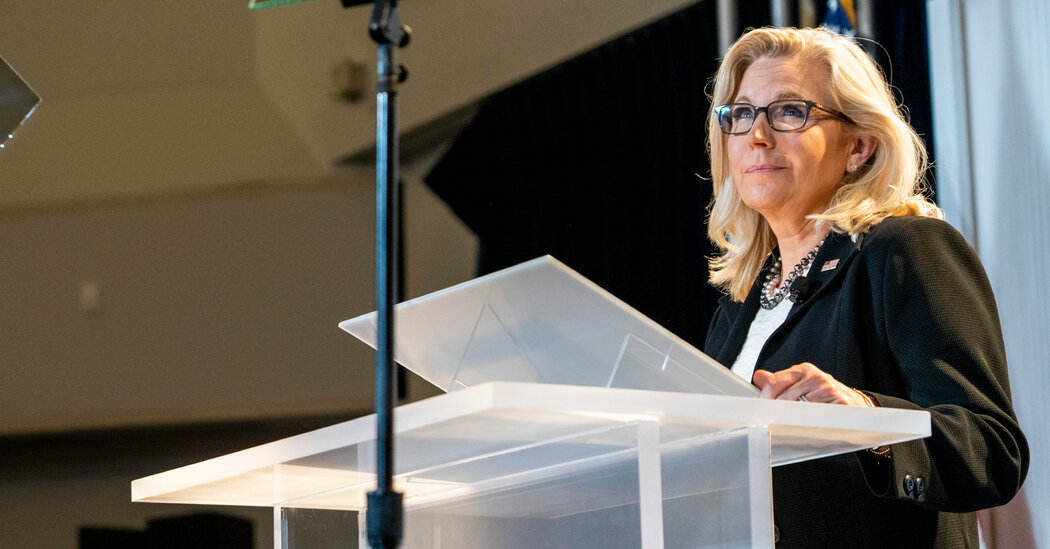 WASHINGTON — As one of the nation’s biggest Democratic donors, the film producer Jeffrey Katzenberg helped make Barack Obama and Hillary Clinton into Hollywood darlings. But this year, he is backing a surprise candidate: Representative Liz Cheney, the staunchly conservative Wyoming Republican.

“We agree on little, if anything,” Mr. Katzenberg said in an interview. “But she has done something that very, very few people in history have done, which is she’s put her country over party and politics to stand in defense of our Constitution.”

He was referring to Ms. Cheney’s leadership role on the House committee investigating the Jan. 6, 2021, attack on the Capitol and her condemnation of former President Donald J. Trump, whom she has called “a domestic threat that we have never faced before.”

To help Ms. Cheney bolster her chances in Wyoming’s upcoming Republican primary — she is facing a Trump-backed opponent — Mr. Katzenberg and his wife have donated more than $43,000 to her campaign and groups supporting her.

Mr. Katzenberg said his contributions went beyond that sum but declined to provide further details, saying only that he was talking up Ms. Cheney, the vice chairwoman of the Jan. 6 committee, to “anybody and everybody that will listen to me, with any party affiliation.”

Mr. Katzenberg is one of a number of Democrats and independents who are crossing ideological lines to support Ms. Cheney, who has become a pariah in her own party for her break with Mr. Trump over Jan. 6 and her criticism of the House Republican leadership.

A supporter of Mr. Trump for almost the entirety of his term, Ms. Cheney — who opposes abortion, supports conservative judges and wants to expand mining and energy drilling even in environmentally sensitive areas — voted in line with him 93 percent of the time, according to FiveThirtyEight.

Most Democratic donors are profoundly out of step with Ms. Cheney on those issues and others. But the Democrats supporting her say they have been impressed by her courage in opposing the former president — whom she voted to impeach after the Jan. 6 attack — and standing up for the peaceful transfer of power.

The billionaire hedge fund manager Seth Klarman, an independent with liberal views on social policies who has given to Ms. Cheney’s campaign in recent months, said in an email to potential donors that the congresswoman was “perhaps the strongest voice in the Republican Party speaking out about the importance of upholding the Constitution.”

Ms. Cheney is one of very few politicians to whom Jane Fraser, a registered Democrat who is the chief executive of Citigroup, has given directly during this election cycle. A spokesman for Ms. Fraser declined to comment. Citigroup was the first major bank to offer employees paid travel to receive abortion services this year.

Yet it will take more than money to salvage Ms. Cheney’s precarious position in Wyoming, and the influx of support from high-profile Democratic donors does not necessarily help her politically in her state.

Polling suggests that she came into the summer trailing Harriet Hageman, her rival in the Republican primary, which will be held on Aug. 16. Last month, Ms. Cheney’s campaign sent mailers to registered Democrats with instructions on how to change parties ahead of the primary — a move that would allow them to vote for her.

Ms. Cheney had previously said she would not take such a step, and it is unclear how successful the gambit will be in a state where the number of registered Republicans dwarfs that of Democrats.

Ms. Cheney, who was ousted last year from her leadership post as the No. 3 House Republican, may be looking beyond this race. She has refused to rule out a presidential campaign in 2024, during which she could use some of the funds that she has already raised.

Even as Ms. Cheney faces an uphill battle in her congressional race, the Jan. 6 hearings have given her a political lifeline for the future — and, if she loses her primary, something to point to as an explanation for her defeat. A spokesman for Ms. Cheney declined to comment on her standing in the race or her crossover donors.

Ms. Cheney’s re-election campaign raised more than $10 million through the end of March, substantially more than Ms. Hageman. Some of those donations came from veterans of Republican administrations like Michael Chertoff, who was homeland security secretary under President George W. Bush, and Theodore B. Olson, who was solicitor general for Mr. Bush and also worked for President Ronald Reagan.

Mr. Chertoff and Mr. Olson co-hosted a fund-raiser this year for Ms. Cheney with Bobbie Kilberg, who was a White House aide under Presidents Richard M. Nixon, Gerald R. Ford and George H.W. Bush, at a Northern Virginia hotel.

But Democratic dollars have been trickling in to Ms. Cheney as well. Her criticism of fellow Republicans who went along with Mr. Trump’s election lies and her questioning of witnesses like the former White House aide Cassidy Hutchinson have further raised her national profile.

Mr. Klarman, who runs the Baupost Group, a Boston-based hedge fund, is holding a virtual reception for Ms. Cheney on Tuesday, the same day that the Jan. 6 committee will hold its next hearing.

“I strongly support Congresswoman Cheney’s bid for re-election, as we share a deep commitment to protecting American democracy and the rule of law,” Mr. Klarman wrote in an emailed invitation to the event. He added: “I’m resolved to do everything possible to send a strong message by keeping her in Congress. We need to stand behind Liz and send a rebuke to the most extreme factions in the Republican Party.”

In a statement, Mr. Klarman acknowledged his policy differences with Ms. Cheney, given his liberal-leaning views on abortion access, gun control and voting rights measures. “If we don’t save democracy, everything else goes to hell,” he said.

Mr. Mehlhorn, who advises Mr. Hoffman and other anti-Trump donors of all political stripes, shared a similar rationale for supporting Ms. Cheney.

“Liz Cheney is our enemy, so to speak, on every other issue,” he said. “But on this issue she is so aligned with us.”

Mr. Hoffman has given to Ms. Cheney’s campaign, according to campaign finance records. He has also given to groups supporting her, Mr. Mehlhorn said, such as the Republican Accountability Project, which supports Republican members of Congress who called out Mr. Trump’s election lies and opposes those who countenanced them.

Smaller-dollar donors have also been drawn to Ms. Cheney.

Khanh Nguyen, a Silicon Valley engineer who has given repeatedly to California Democrats like Speaker Nancy Pelosi and Representative Adam B. Schiff, describes himself as a centrist with a smattering of liberal-leaning viewpoints. But as an immigrant from Vietnam, where he recalled violence and strongman politics as the norm, he said he was appalled by the events of Jan. 6.

“It was shocking to me that only 10 Republicans voted to impeach Trump for Jan. 6,” Mr. Nguyen said. He has donated to Ms. Cheney, he said, because “I want to give her all the tools she needs to win.”

“She’s one of the very few voices that speak out against Trump, speak out for democracy and actually have a chance to influence the party — the Republican Party — in a better direction,” he said.

Vint Cerf, a longtime Democrat and an executive at Google, said friends who disagree with Ms. Cheney on policy matters had chided him for giving money to her campaign. But his $2,900 donation to her re-election bid was a show of gratitude more than anything, he said.

“As I looked at what Liz Cheney did, which was brave in the face of enormous pressure from others in her party, to stand up to them and say, ‘No, this is wrong,’ I was impressed enough by that to say, ‘You know what? She deserves support for that,’” he recalled.