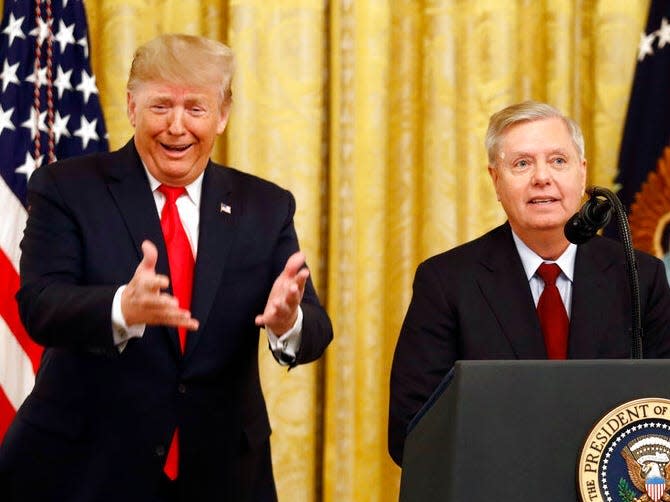 Sen. Lindsey Graham says he’s told former President Donald Trump that he stands a chance of winning the 2024 election if he runs again.

Speaking to CNBC on Saturday, Graham said Trump has a “pretty good chance” of re-election.

“I’m literally telling you what I tell him,” Graham told CNBC’s Steve Sedgwick.

“If you lose again, the history about who you are and what you did dramatically changes,” Graham said he told Trump, per the outlet. “If you come back, it will be one of the greatest political comebacks in American history. And if you get four more years, you can do big stuff.”

Graham added, per CNBC, that Trump might see 2024 as a chance to “start over” and show voters — even those who don’t like him — that he could accomplish some things as president.

“His problem is personal,” Graham said of Trump, the outlet reported. “His policies have stood the test of time. But has he worn the American people out in terms of his personality? Time will tell.”

The South Carolina lawmaker also appeared to warn this weekend that Trump might lose to President Joe Biden in 2024 if he didn’t manage his personality a little better, quipping: “If it’s a personality contest, he’ll be in trouble.”

Graham has, by and large, stood by Trump following the latter’s departure from the White House.

Despite pro-Trump figures like Rep. Marjorie Taylor Greene and Tucker Carlson going after him, Graham has continued to back Trump.

In January, he said he would not back his Senate GOP colleague Mitch McConnell for majority leader unless McConnell had a “working relationship” with Trump, despite the rift between Trump and McConnell.

Graham said in August that if the former president were prosecuted for mishandling classified information, there would be “riots in the streets.”

Trump and Florida Gov. Ron DeSantis have been pegged as leading contenders for the 2024 Republican presidential ticket, though neither has formally declared that they would be entering the race.