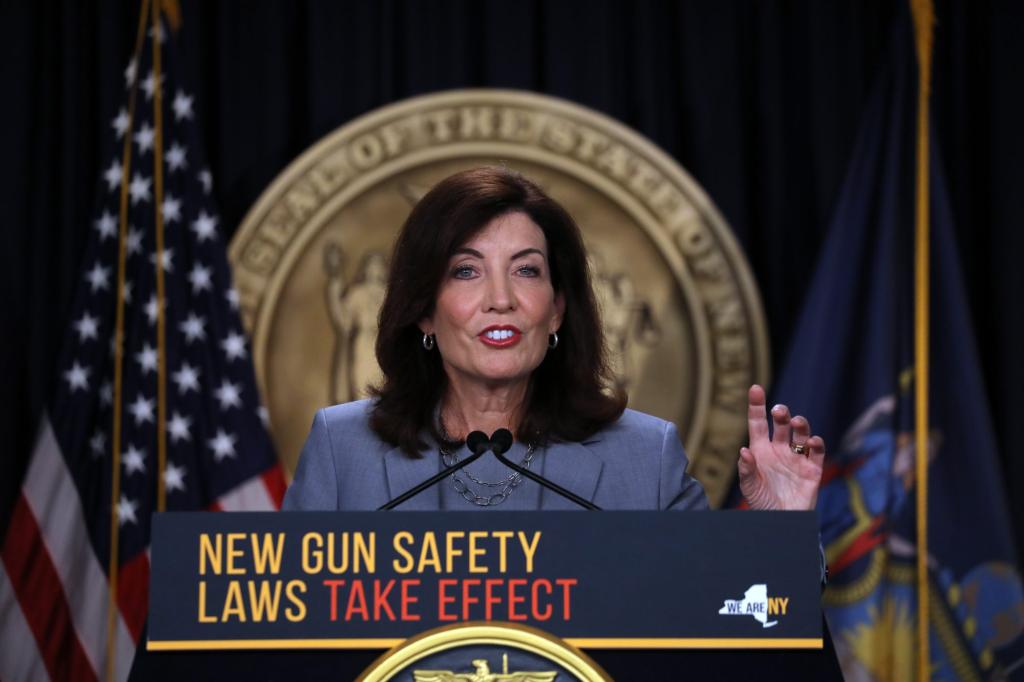 Well, it seems the clueless politicians have made Times Square a gun-free zone (“Sign of the Times Sq.: No guns,” Aug. 31).

Are criminals now going to willingly give up their guns when walking through Times Square? I think we all know that it won’t happen.

History shows us that if someone wants to kill, they will do it, whether it be with a gun, a knife, a pipe, a brick or an automobile. We have seen all of these weapons used recently in Times Square. So good luck with the new law.

Another brilliant piece of legislation signed by our wannabe governor has made this city safer. She and the legislators in Albany really are improving life in this once-great city.

Guns will be banned in Times Square. Law-abiding citizens, who have a legal right to carry a gun, will not be permitted to do so. I wonder if the recidivist criminals have gotten the memo.

I pray that life-long Democrats (of which I once was one) sweep the swamp clear and give us a much-needed change.

You can pass all the laws you want about conceal carry. It will do nothing to bring down shootings and killings of innocent people — young and old.

Do you think gangbangers care about gun laws? The only way to curtail all these shootings and killings is to ensure that when someone is caught with an illegal gun, they go directly to jail — and, if convicted of that crime, they spend a long time in prison.

So the savages who are robbing the elderly and wheelchair-bound seniors on buses, running over the elderly on sidewalks, committing robberies from mopeds and shooting innocent citizens during drive-bys are going to see signs in Times Square prohibiting firearms and say to themselves, “Wow, I can’t bring my gun to Times Square anymore ’cause it’s against the law”?

So now that New York City has a “gun free zone” in Times Square, maybe there will be “knife free zones” in the subways and on the sidewalks.

Former President Donald Trump is to blame for all the blowout spending bills passed since President Biden took office, not Sen. Mitch McConnell (“The GOP’s Lucky To Have Mitch,” Editorial, Aug. 30).

Had the Republicans retained the Senate, none of this would have passed. They lost because a deranged Trump, who cares only about himself and not the country or the Republican Party, convinced voters to stay home in the Georgia Senate runoff election because the vote in Georgia was “stolen” from him. Voters did, Democrats won and the country is paying.

Prepare for a repeat performance. Trump will again cost the Republicans the Senate as his sponsored candidates will lose to Democrats.

Your editorial makes mention of McConnell blocking Attorney General Merrick Garland from the Supreme Court, and thank God he did.

But when Biden picked Garland to be the top law-enforcement officer in the country, didn’t anyone anticipate trouble?

Look at who he has targeted and not targeted. It is a blatant settle-some-scores crusade. He will go down in history as one of the most vindictive, morally corrupt AGs this country ever had.

Want to weigh in on today’s stories? Send your thoughts (along with your full name and city of residence) to [email protected] Letters are subject to editing for clarity, length, accuracy and style.