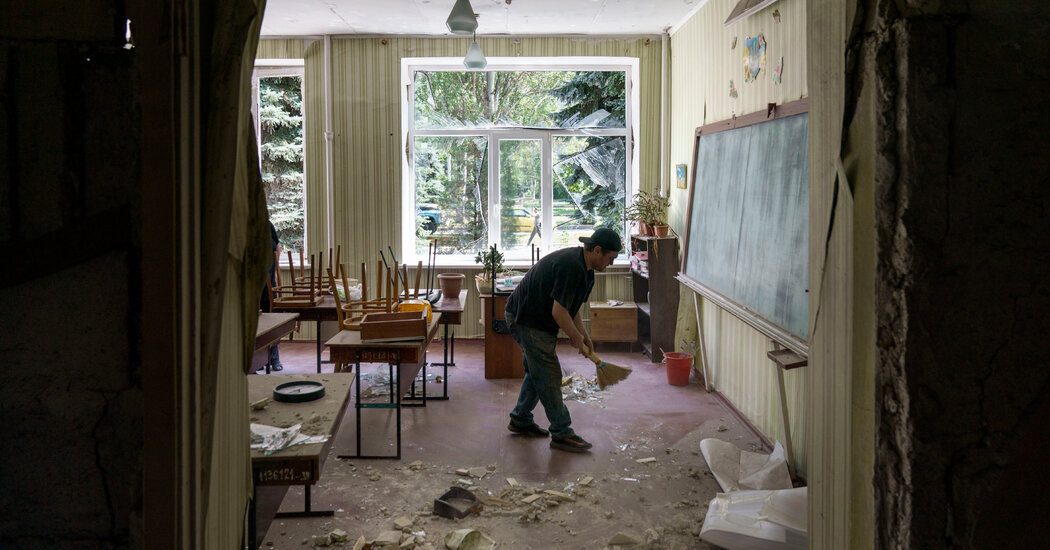 Russia has replaced the commander of its Black Sea Fleet, the country’s state news agency reported on Friday, following a series of setbacks that include a recent powerful strike on one of its Crimean bases and the losses of its flagship vessel in April and control of a tiny island in June that served an outsize role in Russia’s naval operations.

The shake-up suggested the gravity of the setbacks to the Black Sea Fleet’s operations. While there have been unconfirmed reports of similar major changes in the leadership of other forces, they have not been made public by the Russian government.

In a report by the state news agency, Tass, on Friday, the new commander, Vice Admiral Viktor N. Sokolov, was quoted as saying that he had been appointed by the country’s defense minister last week.

The comment came as he spoke to junior officers in Sevastopol, Crimea’s largest port city and the base for the fleet since Russia illegally seized the peninsula from Ukraine in 2014.

“The Black Sea Fleet is participating in the special military operation, and is successfully completing all the tasks set for it,” Admiral Sokolov, 60, told the officers, according to Tass, using the Kremlin’s terminology for the conflict.

Admiral Sokolov, who served previously as the leader of the St. Petersburg-based Kuznetsov Naval Academy, Russia’s top officer training school, added that the fleet expected to receive 12 new vessels this year, along with aviation and land-based vehicles.

He replaces Vice Admiral Igor V. Osipov, who had commanded the fleet since 2019. In May, Britain’s defense intelligence agency reported that Admiral Osipov had likely been suspended following the sinking of the fleet’s flagship, the cruiser Moskva. Asked about the report at the time, a senior Pentagon official went further, saying the commander had been dismissed.

Pro-Kremlin military analysts have cited the Black Sea Fleet as the weakest link in Russia’s military effort. Since the start of the war in February, it has suffered repeated and embarrassing setbacks. Ukraine said it used Neptune missiles to sink the Moskva in April, a strike Russia has never acknowledged. It was the biggest warship lost in combat in decades.

The Black Sea Fleet is integral to the Russian war effort and has been crucial in Moscow’s efforts to exert control along Ukraine’s coastline, devastating Ukraine’s economy. The fleet has also launched sea-based long-distance missiles to strike targets deep inside Ukraine.

“Most of Russia’s naval victories have been achieved here by the Black Sea Fleet,” Admiral Sokolov told the officers, according to a video report of the event by the local television network.

The change in leadership came as Ukraine has increasingly used sabotage and sophisticated longer-range weapons to strike Russian-held territory. But Russia has shown a robust ability to absorb losses, and retains superior military might.

And it remains unclear exactly what toll the fleet sustained in the attack on its Saki air base in Crimea earlier this month, which Ukraine suggested had been carried out by special operatives and local partisans. Satellite images analyzed by The New York Times showed at least eight destroyed jets.

In a briefing for reporters on Friday, a Western official said that the attack had “put more than half of Russia’s Black Sea Fleet naval aviation combat jets out of use.” He added that “the Russian system is busy seeking to allocate blame for the debacle.”

But U.S. officials disputed the idea that such a proportion of the fleet’s aviation assets had been disabled. Recent Ukrainian attacks in Crimea have been significant, they said, and the explosions and damage Ukraine has caused have been real, including the loss of some fighter jets. However, they cautioned that the damage was not decisive, and the recent attacks alone were not enough to cause a shift in the war.

In June, Russian troops withdrew from tiny Snake Island in the Black Sea after repeated assaults by Ukrainian forces, limiting its control over Ukraine’s shipping lanes.