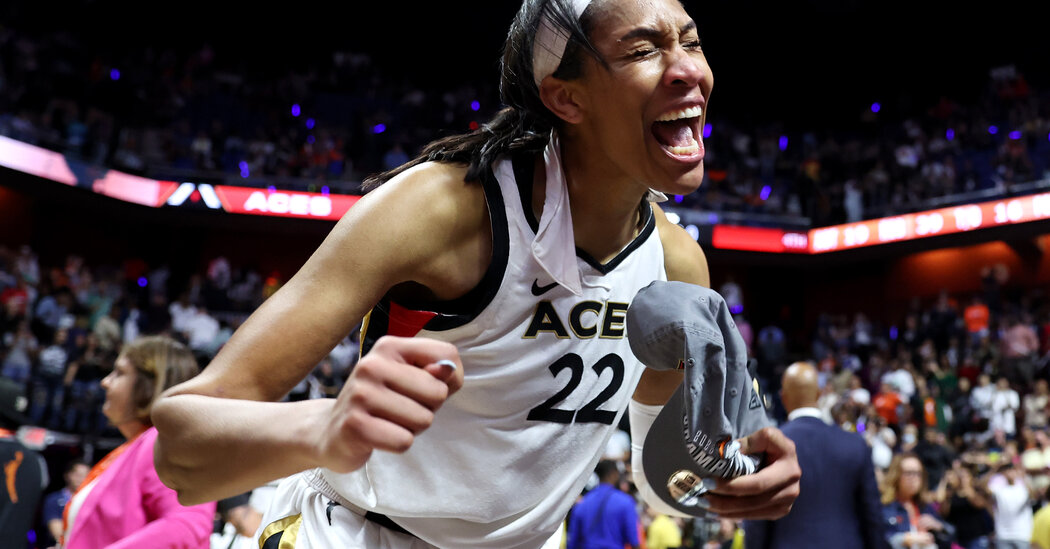 UNCASVILLE, Conn. — With a championship on the line for a team with some of the W.N.B.A.’s biggest stars, the Las Vegas Aces leaned on Riquna Williams, who had scored in double digits just twice this postseason.

Williams raised her index finger to her lips to silence the Connecticut Sun’s white-knuckled fans in Game 4 of the finals as she hit one big shot after another in the fourth quarter. The last of her 17 points came on a step-back shot just inside the 3-point line over the outstretched arms of Natisha Hiedeman. Guard Kelsey Plum raised her hands, and Williams ran around the court with her arms spread wide as Sun fans began to leave.

The Aces defeated the Sun, 78-71, on Sunday to win their first W.N.B.A. championship, their postseason reflecting the regular-season dominance that led them to tie Chicago for the best record in the league.

The Aces led by as many as 10 but had to fight off several furious rallies by the Sun before clinching the title in the final minutes of Las Vegas’s third win in the best-of-five series. Chelsea Gray led the Aces with 20 points and was named the most valuable player of the finals.

“I worked so hard for this,” Gray said as she became emotional and her teammates cheered.

Gray and the Aces’ loaded roster kept Las Vegas a step ahead of the league all season. Four Aces were named All-Stars — A’ja Wilson, Plum, Jackie Young and Dearica Hamby — and Plum was voted M.V.P. of the All-Star Game. Wilson won her second league M.V.P. Award and was named the defensive player of the year. Becky Hammon, in her first season with the team, was named the league’s coach of the year.

But coming into Game 4, Williams, who scored 11 points in the fourth quarter, hadn’t scored more than 14 points all season. The Sun held Wilson to just 11 points on Sunday, her third-lowest scoring performance of the playoffs.

“I got a group of really resilient players,” Hammon said, adding: “You saw different people step up at different moments tonight and that’s what makes us difficult to beat.”

The Aces finished with the best regular-season record in two of the past three seasons and second in the year they didn’t finish first. The Seattle Storm swept them in the 2020 finals. Las Vegas had shouldered the reputation of being a team good enough to win in the regular season but not able — or willing — to make the adjustments needed to succeed in the postseason. Its star-laden roster was seemingly too talented for its own good, with the best players often leaning on the isolation basketball they excel in but that has kept the Aces from closing out championships.

This year, a large group of fans in red, black and gold Aces gear made their way down to the lower levels of Mohegan Sun Arena as the Las Vegas players flooded the court after the game. It was an invaluable moment for Gray.

Last season, the Aces lost the decisive Game 5 of the semifinals to the Phoenix Mercury, who celebrated on the Aces’ home floor. Gray said that ending had stuck in her mind since.

“And now I’ll just have a different replay in my head,” Gray said with a smile.

As the buzzer sounded on Sunday, the Aces players — now champions — yelled and hugged each other, their cheers of excitement bouncing around an otherwise quiet stadium that had been rocked with the deafening roars of Sun fans just moments before.

As Connecticut players exited the court in tears, Sun center Jonquel Jones walked the length of the floor into the Aces’ celebration to hug and congratulate Wilson. As Jones walked away, she paused to clap and thank the fans that remained before heading to the locker room. Jones dominated the Aces physically in the Sun’s lone win of the series in Game 3, and she nearly led them to another victory in Game 4.

Wilson spoke highly of Jones after the game.

“I had to go and speak to her because she played her heart out,” Wilson said of Jones, who was last season’s M.V.P. “It’s so hard to guard her, and I just have all the most respect for J.J.”

The loss for the Sun, the No. 3 seed, is another disappointing finish for a franchise with the second most wins in W.N.B.A. history but no championships. For the second straight game, Sun forward Alyssa Thomas had a triple-double. She is the only player to have a triple-double in a W.N.B.A. finals game.

Hammon said it was a “battle” to beat the Sun. “We knew it wasn’t going to be easy,” she said.

Bill Laimbeer, who had been the Aces’ coach for four years, stepped down before the season. The Aces hired Hammon, who had been an assistant with the N.B.A.’s San Antonio Spurs. She took over a team led by Wilson, who won her first M.V.P. Award in 2020.

As Hammon guided the Aces to the first seed, she said she saw glimpses of the style of play that had kept the Aces from winning a title. But that shifted in the Aces’ semifinal win over the Storm, during which Hammon said the players were “choosing each other” and learned how to “take a punch.”

That proved true as the Aces found ways to win playoff games while their stars struggled and they faced deficits — precisely what happened on Sunday — finally shaking the reputation of a team with unfulfilled potential.

Hammon thanked Laimbeer for putting the team together and praised her players.

“What I’m most proud of is we became a real team out here, and a team that cares about each other and trusts each other,” she said.

Hammon said it was a “little surreal” to win her first W.N.B.A. championship. She played in the league for more than a decade, including several seasons with the Las Vegas franchise when it was in San Antonio.

She said the Aces had “tremendous leadership” among the players, and that they had persisted when they weren’t playing well during the season. She applauded Williams for coming through on Sunday when the Aces had been struggling to score.

“She knows she’s got the ultimate green light,” Hammon said.

Wilson also spoke about growth — hers and the team’s.

“I know who I am now more than ever,” Wilson said. “I feel like I’ve established myself in this league. And the Aces aren’t done yet.”