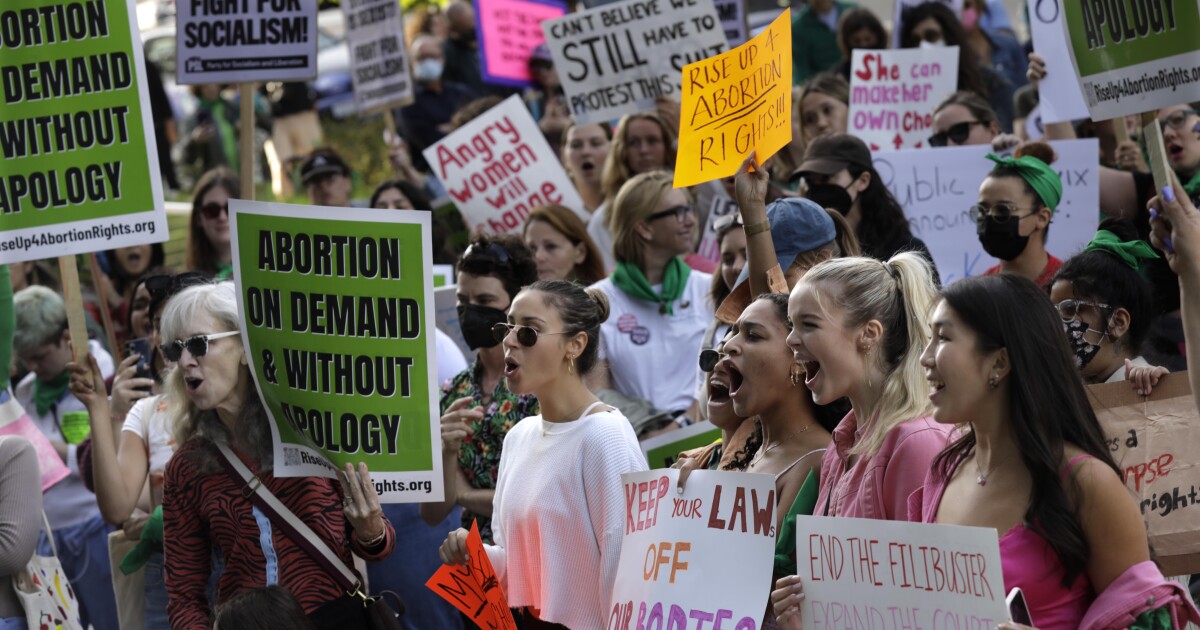 Police and protesters briefly clashed in downtown Los Angeles on Tuesday night after a rally protesting the possible overturning of the U.S. Supreme Court’s Roe vs. Wade decision made its way from a federal courthouse to Pershing Square.

The brief clash came after roughly 400 people gathered in front of the federal courthouse at 1st and Broadway earlier Tuesday night, less than 24 hours after Politico obtained a draft U.S. Supreme Court opinion that seemed to signal the court was poised to overturn the landmark 1973 decision legalizing abortion nationwide.

Amid the sound of blaring car horns, abortion rights advocates spoke in front of the courthouse and held signs that read, “We need to talk about the elephant in the womb,” “I am a woman not a womb” and “Pro-woman, pro-child, pro-choice.”

Speakers ages 17 to 60 shared their experiences and implored fellow protesters to begin a grass-roots movement that would include continued protests, walkouts and demonstrations.

Zora Banon, 34, said she grappled with anxiety before going in front of the crowd and sharing her story of opting for an abortion when she was 27.

“There’s just such a lack of education out there and so much stigma around abortions,” Banon said. “But I talked to a woman in my community who had an abortion and had three beautiful children, and that helped make my decision.”

She recalled seeing her Instagram feed fill with reactions Monday night as news broke of the leaked draft opinion from Justice Samuel A. Alito Jr.

Banon reached out to a friend, 36-year-old Lauren Selman.

Selman said she attended Tuesday’s protest and subsequent march because the battle for abortion rights has been long in the making.

“This is a fight that was my grandmother’s and my mother’s and now it’s mine,” she said. “My mom fought for the right to have an abortion, and now I do.”

Selman said she donates $36 a month to Planned Parenthood in honor of her mother, who gave birth to her at the age of 36.

“I think what people don’t understand about this fight is that we’re about choice,” Selman said. “People chose to have abortions and others chose to be mothers. I stand with people having the right to choose.”

One of the rally’s organizers, Rise Up 4 Abortion Rights Los Angeles, had members urge a nationwide walkout Thursday at noon.

Sarah Smith of Koreatown and Lee Cunningham of Los Feliz weren’t sure they would protest Tuesday. Smith heard the news late Monday evening on CNN and shared it with her friend.

“I couldn’t believe it,” Smith said. “I didn’t think this would happen.”

“This has been a process now for at least six years, and it was just a matter of time,” she said.

The women wore masks and held signs that read “Abortion on demand & without apology,” provided by Rise Up 4 Abortion Rights.

“They are not going to send us back. We’re not moving backward,” Cunningham said.

Around 7:30 p.m., officers escorted a group of about 250 demonstrators marching from the courthouse at Broadway and 1st Street to Pershing Square, said Los Angeles Police Chief Michel Moore. At some point, a group started to take over an intersection.

“We attempted to communicate, clear and provide dispersal order to the group,” Moore said in a tweet shortly after 9 p.m. “Crowd began to throw rocks and bottles” at police, Moore tweeted, adding that one officer was injured to an unknown extent.

Around 8:30 p.m., as the gathering started to disperse, some protesters blocked the intersection of 5th and Hill streets, just outside Pershing Square.

Police slowly drove a pair of vehicles into the intersection, moving about 40 protesters out of the way. Some were seen pounding on the hoods of the vehicles; most left the intersection.

Police declared an unlawful assembly at 9:20 p.m. and lifted it about 20 minutes later.

Officers hit some of the protesters with batons. A glass door at a Planet Fitness was smashed.

A sizable police presence remained in downtown past 9 p.m. as a few dozen protesters roamed around the streets near City Hall.

One person smashed the window of a law enforcement vehicle near Grand Park, and others tagged a bus stop with the words “Google LASD gangs.”

Some stayed as 10 p.m. approached, knocking over fences at City Hall and spray-painting slogans on the pavement. The groups had largely dispersed by 10:30 p.m., and officers put fences back up.

The protest was one of many around California and the nation in response to the draft opinion that was leaked to Politico on Monday night.

Chief Justice John G. Roberts Jr. confirmed the draft’s authenticity in a statement Tuesday, adding that the document did not “represent a decision by the Court or the final position of any member on the issues in the case” and that he had ordered an investigation into how the draft got into the hands of reporters at Politico.

Most legal and political analysts believe the court will follow through on overturning Roe vs. Wade, a move that has been predicted since former President Trump appointed three justices from a list of nominees compiled by the conservative Federalist Society.

Even so, the unprecedented nature of the leaked opinion had political parties plotting responses and the court facing uncomfortable questions about its ability to remain above partisan politics.

President Biden said ending the right to abortion access would mark a “fundamental shift,” calling it a potentially “radical decision” that could undermine other civil rights.

Republicans celebrated what Sen. Ted Cruz (R-Texas) called “the right outcome” while decrying the leak as an attack on the conservative court.

In downtown L.A., Sheila Xiao, an organizer with the Party for Socialism and Liberation, said it was necessary to voice displeasure not only with the Supreme Court but also with the Democratic Party.

“They do a great job of giving us lip service, of fundraising for women’s rights and speaking about women’s rights, but when it comes time to legislate, they’re silent,” Xiao said. “They control the House, the Senate and the presidency, and abortion rights still aren’t guaranteed? How does that happen?”

Lincoln Heights resident Sophia Barrillo, 33, said she felt the urgency to make her voice heard even though she had just finished a 12-hour child-care shift.

“I don’t understand how this happens in this county,” said Barrillo, a native of Panama, where abortion is illegal. “Abortion is about protecting women.”

Barrillo said she wasn’t sure when she would next be able to protest and felt solidarity with the workers in the crowd.

“I feel like we’re all family here and we have to work together,” she said.

The San Francisco Fire Department reported shortly after 10 a.m. that a person was scaling the 61-story building on Mission Street.

The climber was detained at the top of the tower, according to authorities.

San Francisco police did not respond to a request to identify the climber or state what he was charged with; however, a person named Maison DesChamps, who calls himself “Pro-Life Spiderman,” claimed to be the climber and posted a video of the climb on Instagram.

He was reportedly issued two misdemeanor citations for trespassing and resisting a police investigation, according to multiple news reports.