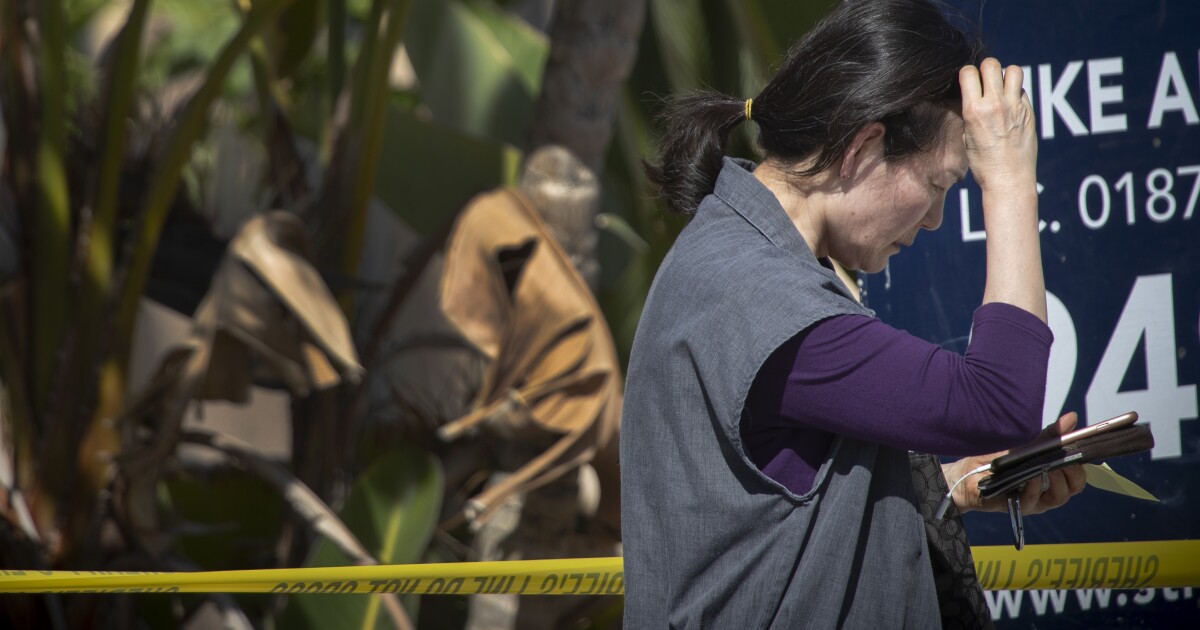 Orange County sheriff’s officials have identified David Wenwei Chou, 68, of Las Vegas as the suspect in Sunday’s shooting at the Geneva Presbyterian Church.

Chou was arrested Sunday and is being held in lieu of $1-million bail at the Orange County Intake Release Center, jail records show. His initial court appearance is currently scheduled for Tuesday.

Sheriff’s spokeswoman Carrie Braun said he was booked on one count of murder and five counts attempted murder.

But authorities are still trying to determine the motive for the shooting that left one churchgoer dead and five others injured.

He seemed friendly at first, one witness said, insisting that he’d worshiped at the church in the past.

Before opening fire, he blocked the exits to prevent people inside from leaving, a law enforcement source told The Times.

It’s unclear what connection — if any — the gunman had to the Taiwanese church that was worshiping at the Laguna Woods facility that afternoon.

The shooting occurred during a lunch in a hall after the service. The event was honoring Billy Chang, who had served as pastor for 21 years until leaving in 2020 to head a congregation in Taiwan. He had returned to the church in Laguna Woods Sunday for the luncheon in his honor.

Before the service, members greeted the gunman — whom they had never seen before — and welcomed him. He told them he had attended services several times, but the members were doubtful because no one recognized him, churchgoer Larry Chen said.

Jerry Chen, who was inside the church at the time of the shooting, said the shooter spoke to parishioners in Taiwanese.

The son of a churchgoer said his mother was leaving the luncheon early to go to a friend’s house, when she saw a few exits locked from the outside. As she left she saw a man chaining the last door, the son recalled his mother telling him.

Peggy Huang, a Yorba Linda City Council member whose parents belong to the Taiwanese Presbyterian Church, said some members told her the man opened fire as churchgoers were taking photographs with the pastor.

Other members of the congregation tackled the shooter. Authorities said they hogtied him with an extension cord, a move officials think likely saved many more lives.

The shooting came less than a day after a racist massacre in Buffalo that left 10 dead. Orange County authorities said it’s too early to determine whether hate was a motive in this attack.

“At this time, we are working very hard to determine the motive,” said Kristi Johnson, assistant director in charge of the FBI Los Angeles office.

The Bureau of Alcohol, Tobacco, Firearms and Explosives said the weapons recovered at the scene are commercially available. The exact types were not released.

“We’re still in the investigative phase, and so we’ll review the case and decide based on motive and the information that we get whether we present it” to state or federal prosecutors, Orange County Undersheriff Jeff Hallock said.

On Sundays, the Taiwanese group worships at 10 a.m., while the Geneva group gathers separately at 10:30.

The 100 or so church members, most of whom are senior citizens, worship in their native language — not Mandarin but Taiwanese, a dialect that was once suppressed by the Kuomintang regime.

The injured — four men ages 66, 92, 82 and 75, and an 86-year-old woman — were all Asian, officials said. All five were shot, and four sustained critical injuries. The man who was killed was in his 40s and was accompanying his mother to church, Huang said.

“We considered it really lucky that they came to us,” Conners said. “We have tried to be inclusive and share many activities.”