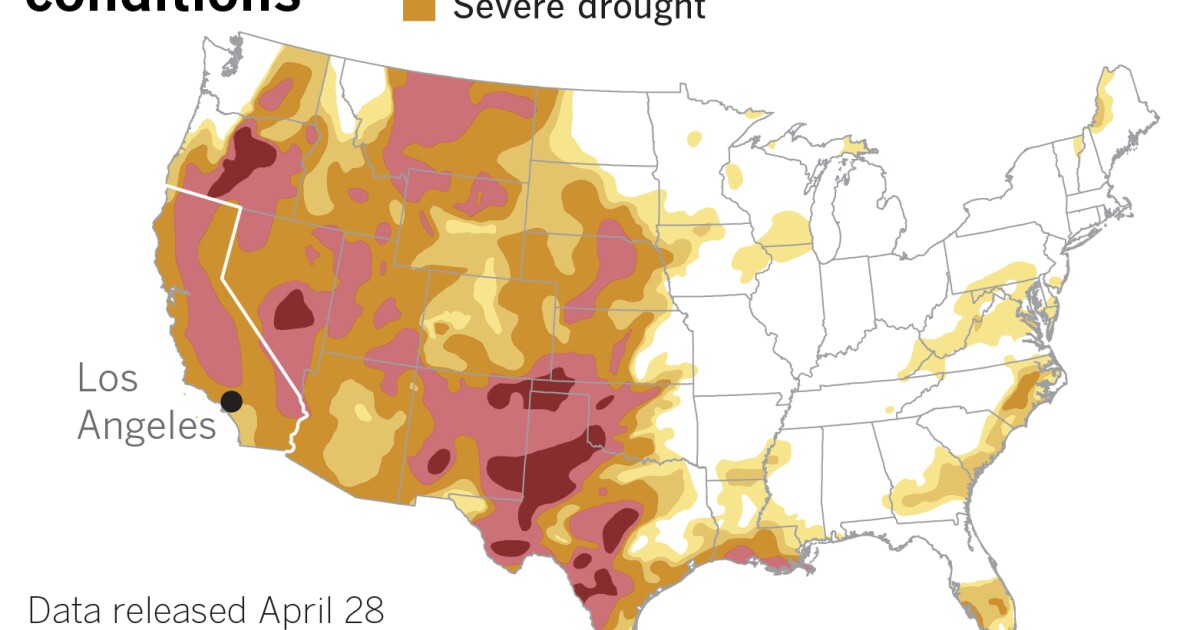 As Southern California braces for unprecedented drought restrictions, long-range forecasts are predicting a summer that will be fraught with record-breaking temperatures, sere landscapes and above-average potential for significant wildfires, particularly in the northern part of the state.

“The dice are loaded for a lot of big fires across the West,” said Park Williams, a climate scientist at UCLA. “And the reason for that is simple: The vast majority of the western U.S. is in pretty serious drought.”

Recently, the National Oceanic and Atmospheric Administration said the temperature outlook for the transition from spring into summer this year calls for above-normal readings for most of the West.

At the same time, the agency also reported that while long-range forecasts had suggested the climate phenomenon known as La Niña was dissipating — raising a glimmer of hope that California might experience a normal winter in 2022 — it now appeared that the “little girl” was hanging on, possibly into a third year.

If NOAA is correct, high temperatures and the lingering La Niña will have major impacts on urban and agricultural water use across the American West, as well as for California’s increasingly extreme fire season.

Already, the federal government has announced that it will delay water releases from Lake Powell, the nation’s second-largest reservoir, as a result of worsening drought conditions along the Colorado River. In an effort to boost the shrinking reservoir, the U.S. Bureau of Reclamation said Tuesday that it plans to hold back water to reduce risks of the lake falling below a point at which Glen Canyon Dam would no longer generate electricity.

Now, with California’s rainy season largely in the rearview mirror and a hot dry summer rapidly approaching, forecasters say La Niña has a 59% chance of continuing through the summer, and up to a 55% chance of persisting through the fall.

Experts say this summer could be a repeat of last year, when fires burned more than 2.5 million acres across California — more than any other year except 2020.

“Last year, one thing that made the fire season especially active were the extreme heat waves that occurred across the West during summertime,” Williams said. “So we’re in a similar situation this year, where we’re going into summer with extremely dry conditions, but we don’t yet know whether there are going to be more record heat waves this year. That’s why there’s still a lot of uncertainty in how the fire season is actually going to play out.”

Warming of the planet due to human activity has increased the likelihood of severe heat waves, and hotter temperatures also worsen drought by causing snowpack to melt earlier in the year, and causing more precipitation to fall as rain, instead of snow.

“The chances of having record-breaking heat waves this year are higher than normal,” Williams said. “But there’s still room for hope that we get lucky.”

Already this year, California has seen 1,402 fires that have together burned 6,507 acres. That compares with 1,639 fires that burned 4,779 acres at this time last year, said Capt. Chris Bruno of the California Department of Forestry and Fire Protection.

Cal Fire is currently holding trainings in all its programs, from helicopter rescues to hand crews, and is bringing on seasonal employees to support operations with an eye toward reaching peak staffing — which averages 10,000 employees — by June or July, he said.

La Niña’s refusal to move on could also cause problems for places other than California.

La Niña influences climate around the globe, and is cyclical. It can bring drought to some parts of the world at the same time as it brings torrential rain to others.

“Both La Niña and El Niño are major disturbances in ‘the force’” said climatologist Bill Patzert. Some weather disasters around the world have been blamed on climate change but are actually typical of the La Niña impacts we’ve seen in the past, although they may well be intensified or changed by warming brought on by the burning of fossil fuels, he said.

While California had its driest January, February and March on record, Alaska and the Pacific Northwest were wet. Across the Pacific Ocean, Australians were fleeing record flooding. Prolonged drought gripped equatorial eastern Africa, raising the specter of famine for millions of people in the Horn of Africa. At the same time, parts of South Africa, such as Durban, received record rainfall. Torrential downpours triggered flooding and landslides in Rio de Janeiro.

There are other influences as well. La Niñas usually weaken wind shear in the Caribbean and tropical Atlantic, contributing to increased hurricane activity in the Atlantic Basin. Both 2020 and 2021 were active hurricane seasons, with 2020 going into the record books as the year with the most named storms of any season on record.

This year, forecasters at Colorado State University have predicted 19 named storms, including nine hurricanes. This would be the
seventh consecutive above-average Atlantic hurricane season, according to Patzert.

In the northern United States, La Niñas are typically associated with colder, stormier-than-average conditions and increased precipitation. In the southern U.S., they’re known for warmer, drier and less stormy conditions.

Both La Niña and El Niño are part of what is called the El Niño Southern Oscillation, or ENSO. Between them is a neutral phase, which is what forecasters had thought we were headed toward this spring.

In the meantime, forecasters say, the dryness in the western U.S. has a silver lining, at least for Southern and Central California. While the National Interagency Fire Center is predicting that much of the northern portion of the state will see an above-normal potential for significant fires through August, meteorologists are calling for near- to below-normal fire activity in the southern reaches.

That’s because there hasn’t been enough rain to grow the grasses that often serve as fuel for Southern and Central California’s lower-elevation fires, said U.S. Forest Service meteorologist Matt Shameson.

“I’d say the fine fuels are about ankle to calf high,” he said. “Normally, they’re about knee to waist high.”

The region has seen no significant grass fires so far this year, which normally start across the lower elevations in the middle of April, he added.

Northern California has received more rain, particularly at the end of March through April, so there is a more robust grass crop, which helps spread fire by carrying it up into larger fuels like trees, he said. In addition, Northern California has more vegetation in general, so fires there are typically not limited by the amount of fuel available.

“I think that this year is going to pretty much mimic last year — very similar conditions are expected,” Shameson said. Southern California had fewer significant fires than average and saw less acreage burned, while Northern California shattered records, with the Dixie fire scorching nearly 1 million acres and burning across the Sierra Nevada for the first time in recorded history.

“I can tell you: They’re expecting another big fire season up north,” he said.

The effects of these repeated large, severe fires have the potential to be ecologically devastating and pose a real risk of compromising the state’s climate goals, experts say. The Sierra Nevada and Southern Cascade ranges, which currently store close to half of California’s captured carbon, lost 1.1 million tons of stored carbon to wildfire, drought and invasive pests from 2018 to 2019 alone, according to recently published research by scientists at UC Berkeley.

“That’s a 35% reduction in just a year,” said author Alexis Bernal, a research specialist at UC Berkeley’s Stephens Lab. “And we know that these disturbances are only going to increase in frequency and intensity with climate change.”

She and other scientists are calling for land managers to increase forest resiliency by thinning vegetation and increasing the use of prescribed fires to reduce the density of forests so that blazes burn less severely through them.

Absent intervention, she said, it’s projected that the Sierra Nevada and Southern Cascade region will lose over 75% of its above-ground carbon stocks by 2069, sending about 860 million metric tons of carbon dioxide into the air.

“That means the Sierra Nevada and Southern Cascade region will no longer be a carbon sink, as it is now,” she said. “It will be a carbon source.”

Large, high-severity burn patches can also result in ecosystem collapse by converting forests into grass and shrublands, she added.

“These landscapes may no longer function as forests anymore,” she said. “They may function as something else, which would be pretty devastating for all living things, including ourselves, that rely on these forests to survive.”