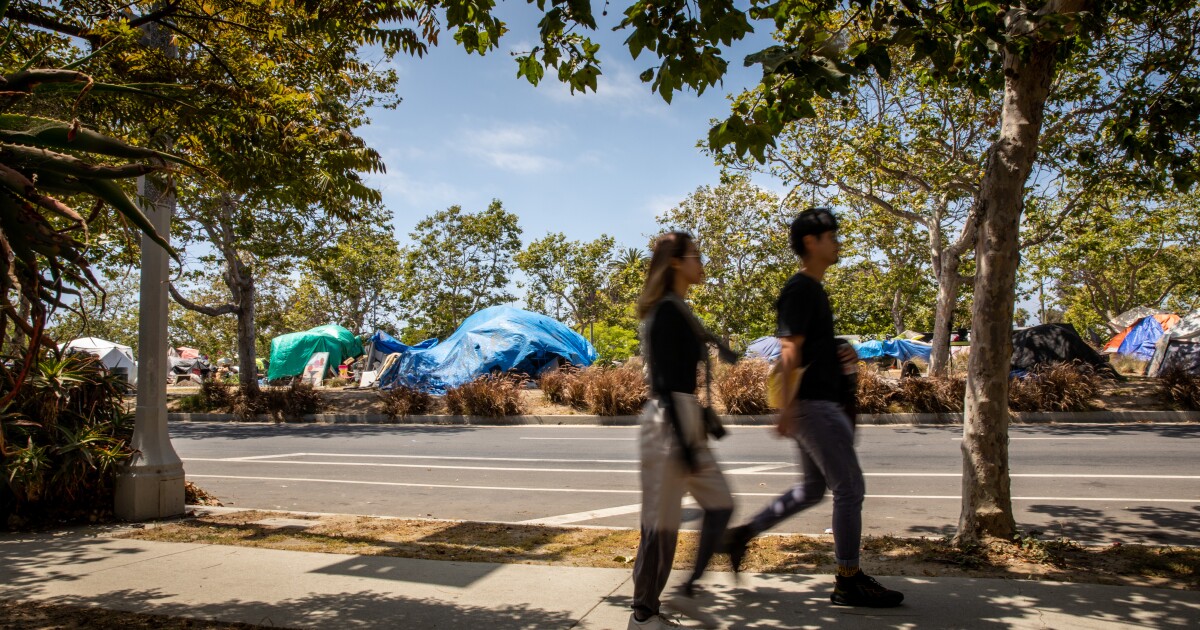 The Los Angeles City Council instructed its lawyers on Tuesday to draft a major change to the city’s anti-camping ordinance, barring homeless encampments from going up within 500 feet of schools and daycare centers.

The council voted 13-2 vote to draft legal language that would expand its anti-camping law to cover hundreds, possibly thousands, of educational facilities.

Council members made their decision after hearing from the parents of schoolchildren at Virgil Middle School, and from Alberto M. Carvalho, superintendent of the Los Angeles Unified School District, about homeless people outside campuses.

Carvalho, appearing in person, urged the council members to approve the measure, saying students have been witnessing behavior that threatens to cause trauma and harm their cognitive development.

“I’ve seen elementary schools with conditions that none of us as parents would find acceptable for our children — individuals with mental illness, some of them absolutely unclothed, shouting profanities to the listening ear of children,” he said.

Bonin said the plan, if ultimately enacted, would simply push encampments to other nearby locations.

The proposal was unveiled and approved one week before Tuesday’s election, just as several incumbents are locked in competitive races. In many of those contests, homelessness and public safety have dominated the debate.

All voted in favor of the new anti-encampment measure.

Cedillo said the proposal has support from elementary schools in the Highland Park and Mt. Washington areas of his district.

Homeless advocates objected both to the substance of the proposal and to the speed with which the council proposed and approved it.

The measure would represent a dramatic shift in the city’s approach to homeless encampments, rewriting a key aspect of an ordinance that was finalized only last summer following weeks of contentious debate.

The city’s existing anti-camping ordinance allows the council to prohibit camping on sidewalks around parks, libraries and schools. However, enforcement cannot occur until the City Council has reviewed a specific location and voted to give the go-ahead to clear it.

Critics argued at the time that the law would punish people for living on the streets. Council members, in turn, promised that any enforcement would be accompanied by the arrival of “street engagement teams” — social workers, mental health specialists and others who would offer the unhoused shelter and services.

Tuesday’s measure was adopted without any review from the council’s Homelessness and Poverty Committee, which is headed by De León. If the council ultimately approves the changes to its anti-camping law, every school and daycare center could become a subject of immediate enforcement, without the lengthier review process.

Pete White, who runs the Los Angeles Community Action Network, an anti-poverty organization, said he fears the changes will punish those who are living on the street, pushing them even further out of sight. Tuesday’s vote, so close to an election, sends a clear message, he said.

“This signals to an increasingly agitated electorate that there is a response coming from those sitting behind the horseshoe” he said.

But, he said, this is an instance of elected officials again focusing too much on banning people from certain locations and not enough on creating more housing and services for a population that is vulnerable and needs more services.

In recent months, tents have remained at many of the city’s no-encampment areas, with outreach workers struggling to persuade some people to move voluntarily. So far, the Los Angeles Police Department has issued tickets sparingly.

Eunisses Hernandez, who is looking to unseat Cedillo in next week’s election, called the council’s action “horrific.”

“Banning encampments from specific locations only pushes people around and does nothing to get folks off the streets into housing,” she said. “There is only one thing that effectively reduces the presence of encampments and that is long-term housing and care.”

Kate Pynoos, a former Bonin aide now running against O’Farrell, also objected to the measure. She said O’Farrell and his colleagues “cynically cloaked this back-room motion in terms of ‘supporting the youth.’”

“What motivates O’Farrell is simply pushing the unhoused out of sight, rather than actually solving this crisis by providing them with permanent housing,” she said.

O’Farrell, before casting his vote, offered a different take, saying his office has been working to bring people “under a roof” — both at temporary locations and in permanent housing.

“We are standing up more housing solutions than ever before across this city,” he said.