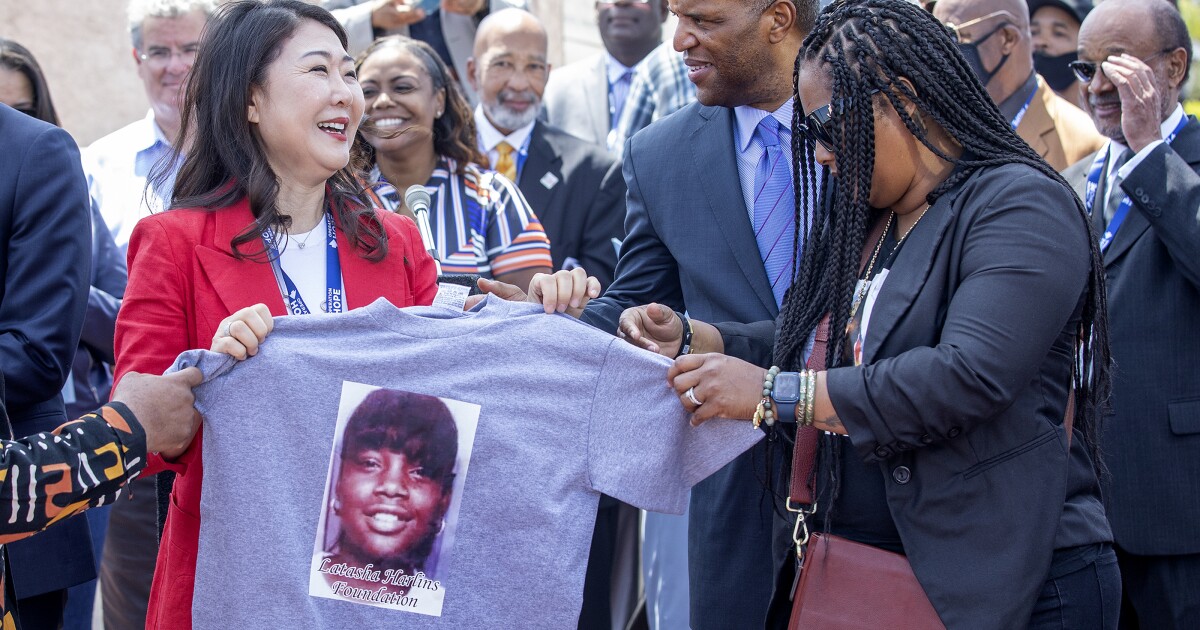 For months, Hyepin Im thought about calling Shinese Harlins-Kilgore, but she couldn’t work up the courage.

Im wanted to discuss the fatal shooting of Harlins-Kilgore’s cousin, Latasha Harlins, by a Korean-born liquor store owner in 1991.

A few weeks ago, Im finally called. The two women hashed out the tensions between Blacks and Koreans that erupted after the killing and the light punishment the store owner received.

Those tensions helped fuel the riots that sent Los Angeles up in flames on April 29, 1992.

Im recounted the story at Florence and Normandie avenues on Friday, the 30th anniversary of the riots, which erupted at that corner after the acquittal of the police officers who beat Rodney King.

“If our communities are to go together, I think we need to understand the context in which both our communities have also been the victims” of factors beyond their control, said Im, a Korean American community leader who is president and founder of Faith and Community Empowerment.

Im had nothing to fear, it turned out — she and Harlins-Kilgore have been talking ever since.

At the Florence and Normandie event, Harlins-Kilgore presented a gift to Im: a T-shirt with a photo of Harlins.

She reassured Im to never be “worried to talk to a colored person.”

Across South L.A. and Koreatown on Friday, Angelenos commemorated the anniversary, recognizing the progress they’ve made and pledging more dialogue to bring people closer together.

At Florence and Normandie, in addition to the event organized by the financial empowerment group Operation HOPE, Tavis Smiley and Dominique DiPrima of KBLA Radio hosted a live broadcast.

In Watts, Black residents celebrated a 1992 gang cease-fire that was inspired by the racial injustice leading up to the riots.

In Inglewood, Korean and Black leaders unveiled a mural depicting people from their communities with a sign saying, “Roots Hold Stronger Entwined.”

In Koreatown, hundreds attended a peace gathering where Korean American and Black artists sang and rapped.

More events are scheduled for the days and weeks ahead. Korean and Black community leaders will gather at Florence and Normandie on Saturday morning. Comedians and artists, including the actor John Cho, will speak on Sunday afternoon in Koreatown.

On Friday, local leaders took a bus tour from First AME Church to Florence and Normandie.

John Hope Bryant, the founder, chairman and CEO of Operation Hope, pointed to the diverse crowd on the bus, from Asian American community leaders such as Im to Black officials such as Michael Lawson, president and CEO of the Los Angeles Urban League.

“Can we all get along? It looks like we can,” Bryant said, echoing a famous statement King made during the riots. “Look at this bus.”

Still, community leaders acknowledged the challenges ahead. For one thing, South L.A. is increasingly gentrifying.

Robert Sausedo, president and CEO of the South L.A. nonprofit Community Build, noted that his block has lost eight Black families in the last few years.

Forescee Hogan-Rowles, president and CEO of R.I.S.E. Financial Pathway, noted that the area still has more check-cashing places than banks. The good jobs promised for residents often fail to materialize, she said.

At a news conference after the tour, many spoke of the recent rise in hate crimes, including against Asian Americans.

noted the deep-rooted inequities that have persisted in the 30 years since the riots.

“We know that people in this city are feeling insecure about their future, cut off from opportunities and cut off from one another,” he said.

As Garcetti spoke, a protester with a bullhorn shouted that many residents think another riot will happen — a belief reflected in a recent survey.

“With all the suffering we’ve gone [through], that’s not hard to understand,” Garcetti said of Angelenos’ pessimism.

Still, Garcetti and others also sounded an optimistic note.

“I am hopeful, because this is Los Angeles,” said Rep. Karen Bass (D-Los Angeles), who is running for mayor and was a community activist at the time of the riots. “We can move forward in this city … We just have to move ourselves forward.”

King’s daughter, Lora King, called for people to operate “out of a place of love and hope.”

“Let’s push, so that we won’t be the next hashtag,” she said.