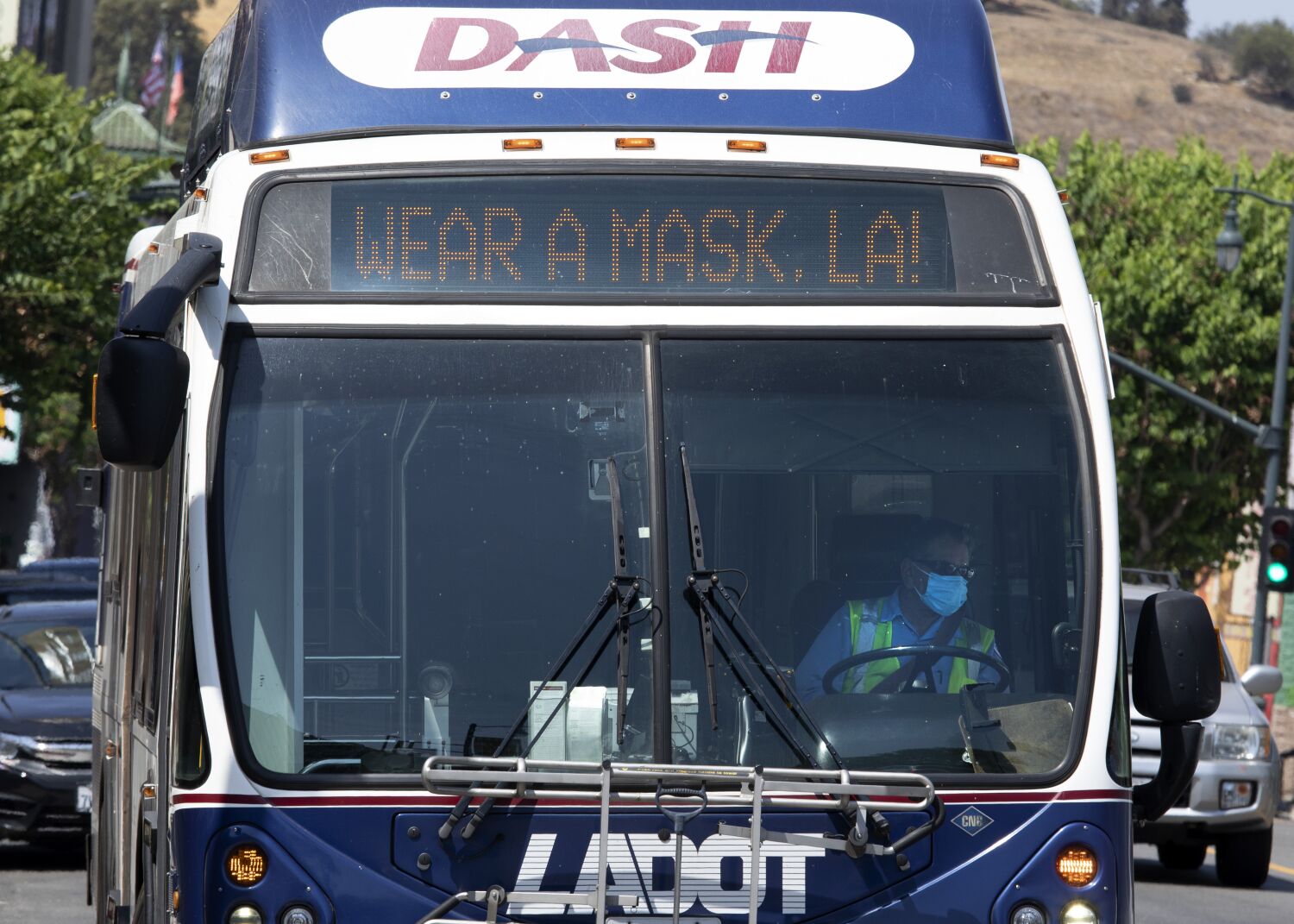 Los Angeles County’s requirement that riders wear masks aboard public transit or in transportation hubs such as airports could end this month if coronavirus case rates decline further.

And the county Department of Public Health also is moving toward ending its recommendation for universal masking in indoor public settings and businesses. Instead, health officials say doing so would be a matter of personal preference.

Officials would still strongly recommend that certain individuals — including older or unvaccinated residents, and those with underlying health conditions or who live in high-poverty areas — mask up in higher-risk settings. Such spaces include those with poor air flow, are crowded or involve close contact with others.

The changes in mask rules and recommendations would occur once L.A. County falls below a threshold of fewer than 100 cases a week for every 100,000 residents. That’s equivalent to roughly 1,400 cases a day.

For the seven-day period that ended Thursday, L.A. County reported about 1,700 coronavirus cases a day. On a per capita basis, that’s 119 cases a week for every 100,000 residents.

Should case rates continue to decline as they did last week, Ferrer said she expects L.A. County will hit this trigger by the end of the month.

Regardless, some local mask orders would remain in place. For instance, those who have been infected with the coronavirus would still need to mask up for a 10-day period after the start of symptoms or their first positive test, county officials say. A 10-day masking period also would remain for people following exposure to an infected person.

The California Division of Occupational Safety and Health, also known as Cal/OSHA, has similar rules, including requiring employees exposed to the coronavirus to wear a mask for 10 days at work after the exposure.

“That 10-day period corresponds with … the time the person who was exposed is most likely to become infected. And because the person with COVID is often capable of infecting others for up to 48 hours before they develop any symptoms — and some people never develop symptoms and yet can infect others — masking when around others after a known exposure to the highly infectious COVID variant remains sensible,” county Public Health Director Barbara Ferrer said Thursday.

The county also still requires infected people stay home for at least the first five days after the onset of symptoms or the first positive test. They can exit isolation as early as the sixth day if they test negative on a rapid test, and generally can end isolation after the 10th day without needing a negative rapid test result.

The California Department of Public Health also requires masks indoors in certain locations, including healthcare settings, long-term care and correctional facilities, emergency or homeless shelters and cooling centers. Businesses and venues can choose to implement their own mask requirement.

And state officials still strongly recommend masking in indoor public settings. That guidance has been in place since mid-February, when the state lifted its indoor mask mandate.

L.A. County’s mask policy is generally aligned with the state, but transit is a notable exception. Local health officials ordered a mask requirement on public transportation in April after a judge voided the U.S. Centers for Disease Control and Prevention’s nationwide order requiring masks on mass transit and airports.

For months, the nation’s most populous county has been California’s most notable holdout when it comes to public transportation. Two other agencies that still require mask use on public transit are the BART commuter rail system in the San Francisco Bay Area and the AC Transit bus system in the East Bay.

Individual transit agencies in L.A. County could still choose to order their own mask mandates. The L.A. County Metropolitan Transportation Authority, however, plans to follow the lead of the county Department of Public Health.

Relaxing the county health department’s masking order on public transit would end one of the last widespread mask mandates on the books. While compliance with the local rule has been spotty, its persistence reflected continued caution by the county, given the heightened transmission risk in those settings.

But health officials acknowledge that, as the pandemic appears to wane, the public health response needs to change. Rules and requirements that make sense during periods of elevated transmission or when the healthcare system is coming under strain can be toggled off when conditions improve.

“We do want to acknowledge that, as conditions change in our community, that the guidance can change,” Ferrer said. “I think it’s very hard for everyone to imagine a future where we would have a strong recommendation that every single person keep their mask on all of the time.”

It’s clear many Angelenos who once routinely masked are no longer doing so. And for some, Ferrer acknowledged, the loosening of the health department’s recommendations won’t have much impact.

But for others, they offer a guide to settings that are higher and lower risk. COVID-19 is still caused by a virus “that can cause devastating illness. And in some places, people need to keep their masks on because of that,” Ferrer said.

For the weekly period that ended Thursday, L.A. County tallied 100 COVID-19 deaths. That’s up from 78 deaths recorded over the prior week, but still lower than the summer high of 122 deaths recorded between July 31 and Aug. 6.

Given the risks of long COVID and reinfections that can happen despite being vaccinated, some people have “doubled down on wanting to make sure that they reduce the likelihood that they will either get infected … or get reinfected,” Ferrer said. Others will feel more confident engaging in activities some may consider higher risk.

“I don’t think there’s a right or wrong here. I think this is what personal preference means,” she said. “Our job is to make sure everyone has a lot of information to help them make a good decision.”

Coronavirus case rates in the county have fallen to their lowest level since April.

However, officials have observed that the week-over-week decrease in cases has softened. The most recent was a 5% decline, compared with the prior week’s 30%.

In addition, coronavirus levels in wastewater no longer appear to be dropping as fast as they were earlier this year.

“These data may indicate that the decline in viral transmission that we saw throughout the summer could be leveling off. So obviously, we’ll continue to monitor these trends very carefully,” Ferrer said.

Ferrer has expressed hope that broad uptake of the updated COVID-19 booster shot could help minimize a possible third fall-and-winter surge of the pandemic.

There’s still a possibility L.A. County health officials could bring back a blanket recommendation to wear masks should conditions worsen.

And if COVID-19 hospitalizations began increasing, Ferrer said she wouldn’t rule out a return to a universal indoor mask order. But conditions would have to be quite bleak to get to that point, with a dramatic worsening of conditions few experts predict is likely, based on what we know now.

“That would really be a variant that we’re not expecting, evades our vaccine protection almost entirely, and is again creating high rates of transmission and that’s accompanied by strain on the healthcare system,” Ferrer said.