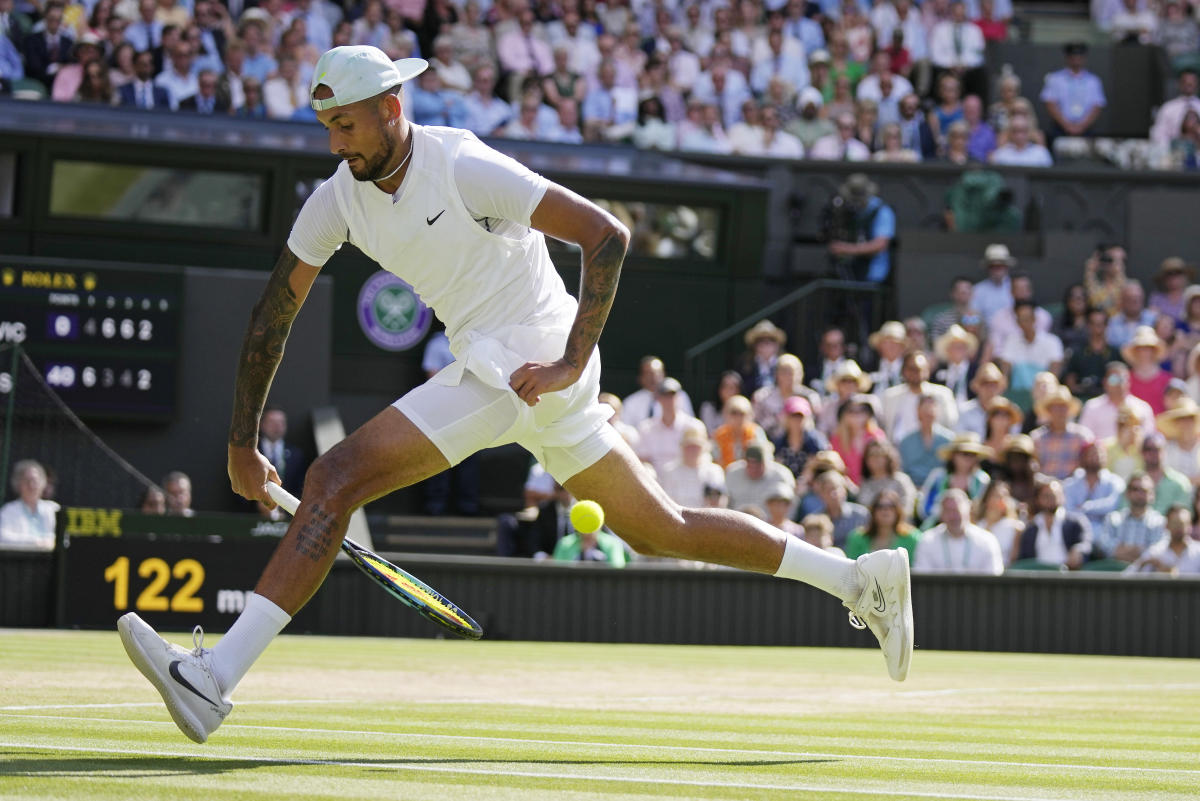 NEW YORK (AP) — In one breath, Nick Kyrgios talks about heading into the U.S. Open with as much self-belief and good play as ever, coming off a runner-up finish at Wimbledon and some strong results on hard courts in recent weeks.

In the next, ever an enigma, the 23rd-seeded Kyrgios says he can’t wait for his stay in the Flushing Meadows bracket to be over — perhaps as soon as Monday night, when he faces his “good mate,” fellow Australian and doubles partner Thanasi Kokkikanis — so he can head back home to the other side of the world.

Asked what he takes away from the run at the All England Club in July, Kyrgios said: “The confidence in myself to be able to do it over two weeks. Staying in a single spot for two to three weeks can be exhausting. And to know that I can do that and go about things the right way and take every practice session, every recovery session, the right way, it’s confidence in the back of my mind. But also, I’m the type of player that if I had won Wimbledon, I probably wouldn’t have played the U.S. Open.”

His first-round matchup might otherwise be a much-anticipated highlight of Day 1 at the year’s last Grand Slam tournament, along with appearances by 2021 men’s champion Daniil Medvedev (against Stefan Kozlov) and 2022 French Open finalist Coco Gauff (against Leolia Jeanjean) during the afternoon session in Ashe.

The rest of the schedule Monday will be overshadowed by the contest that precedes Kyrgios vs. Kokkinakis at night: 23-time major champion Serena Williams, in what could be the last singles match of her career, against Danka Kovinic. Kyrgios knows, naturally, how significant that one is, although he doesn’t anticipate watching any as he gets ready to play.

“Obviously it’s a very special moment for her. She’s probably the greatest of all time,” he said. “Whether or not we see anyone live the career that she has? I don’t think that’s possible.”

His career is rather unique itself.

Not in the same sort of remarkable results sort of way, mind you. But the way he carries himself on court — from the between-the-legs shots to the conflicts with opponents or chair umpires or fans — is far from standard.

At Wimbledon, where he made it past the quarterfinals at a major for the first time before losing to Novak Djokovic in a four-set final, there were plenty of big serves and forehands, as always.

Also, though, there was a $10,000 fine for spitting in the direction of a spectator, a contretemps with Stefanos Tsitsipas during and after their match (Tsitsipas said Kyrgios has “a very evil side” and accused him of “constant bullying”) and a back-and-forth about a woman in the stands who Kyrgios said was drunk (and who recently sued him for saying so). And, during that fortnight, word emerged from Australia about a still-pending court case involving an accusation of assault against a former girlfriend.

Djokovic managed to capture the multiple sides of Kyrgios with one lengthy answer at a news conference before their Centre Court matchup last month, remarking that “it seems like, mentally, he’s at a better state than what he was, where he was, some years ago” and noting “he thrives in a big stage” and “he’s got so much talent,” then concluding: “We know what was happening throughout many years with him mentally, emotionally; on and off the court, a lot of different things that were distracting him and he was not being able to get this consistency.”

That last word is not one often associated with the 27-year-old Kyrgios. It is appropriate lately.

Since Wimbledon, as the tour moved to the North American hard courts in the leadup to Flushing Meadows, Kyrgios won a doubles title with Kokkinakis in Atlanta (they were the doubles champions at the Australian Open in January), became the first man to ever win singles and doubles titles in the same year at Washington, and then beat Medvedev en route to the quarterfinals at Montreal, before petering out with a second-round loss to top American Taylor Fritz in Cincinnati.

“I was just so mentally and physically worn out. Mentally I wanted to go out there and give another good performance; my body almost didn’t let me. It was like trying to get a lawn mower started after four or five times. It just wasn’t going,” Kyrgios said. “There’s been so much going on at home — my brother’s had a baby; my mom is sick. It’s just hard to be away. It’s definitely weighing on me every day I’m longer on the road. I just want to go home, kind of thing. But I know this is an important event here, so I’ve just got to put them to the side.”

Some players will never acknowledge looking at the draw to see what could happen down the road in a tournament. Kyrgios is not one of them.

He thinks he and Kokkinakis were placed in a “great section” of the bracket, “so whichever one of us advances kind of has a great opportunity to capitalize.”

Still, Kyrgios added, “Whether I win or lose, it’s going to be the same for me. … It’s a win-win for me. If I win, it’s more money and another great result. If I lose, I get to go home.”