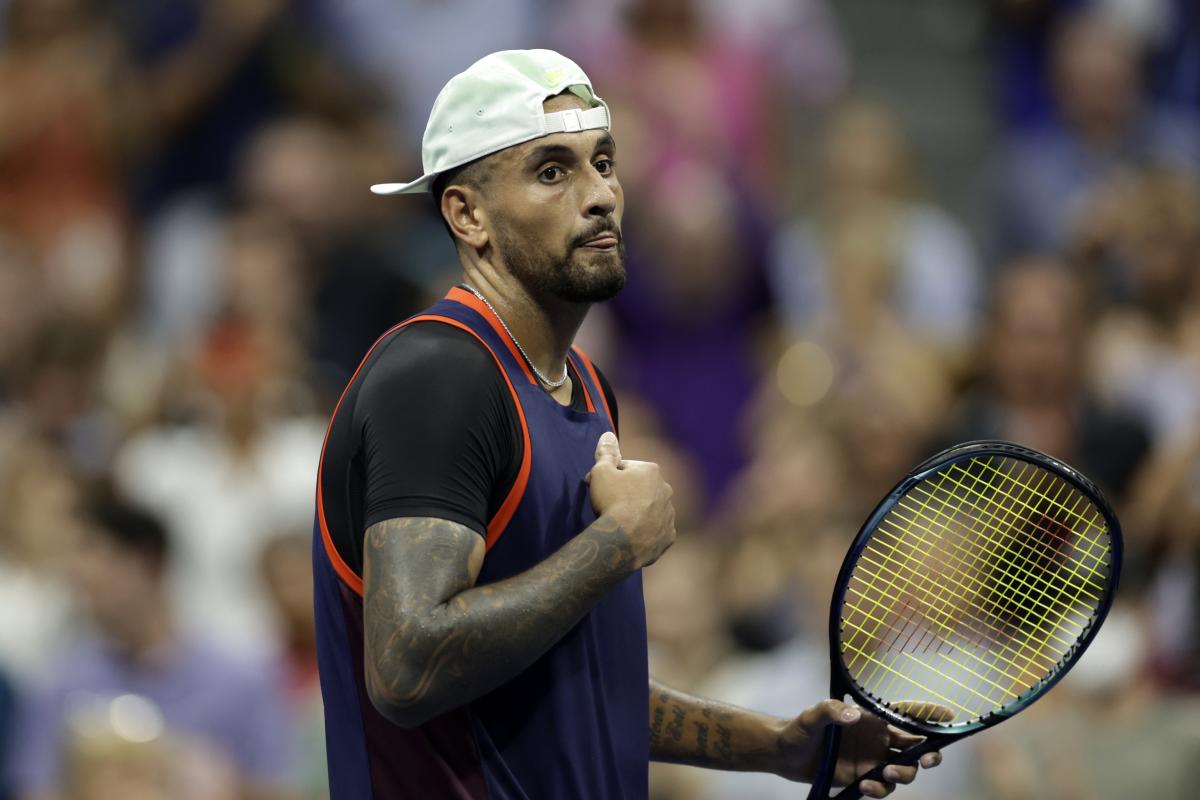 NEW YORK (AP) — Nick Kyrgios sat in the Arthur Ashe Stadum locker room after ending Daniil Medvedev’s U.S. Open title defense and stay at No. 1 in the rankings and felt a mix of pride and relief.

Pride at the big-serving, solid-returning performance that resulted in a 7-6 (11), 3-6, 6-3, 6-2 victory over Medvedev on Sunday night, the latest in a series of career-altering results that carried Kyrgios to his first quarterfinal at Flushing Meadows on the heels of his run to his first Grand Slam final at Wimbledon.

Pride, he said, at lifting himself out of “some really tough situations, mentally” and “some really scary places” off the court, which he first revealed in February. Pride, he went on, at succceding in distancing himself from ”feeling so depressed all the time, so feeling sorry for myself.”

And relief, Kyrgios explained as he fiddled with the gray Boston Celtics cap he was wearing to his post-match news conference, at being able to come through when the lights are the brightest and stakes the highest, “because there’s just so much pressure every time I go out on court, so much expectation, so much unpredictability of what I can do.”

The 23rd-seeded Kyrgios, a 27-year-old from Australia, never had managed to make it past the third round of the U.S. Open until now, going 0-4 at that stage in the past. He also never has managed to parlay his unquestioned skill into the terrific play with any semblance of the consistency he is displaying lately.

“I’m just glad I’m finally able to show New York my talent,” Kyrgios said after delivering 21 aces and employing his typical go-for-broke style against Medvedev. “I haven’t had too many great trips here.”

He reached his first Grand Slam semifinal, then first Grand Slam final, at the All England Club in July, before losing to Novak Djokovic in the title match. Then Kyrgios won his first ATP title in three years at Washington in August. He followed that up with a victory over Medvedev at a hard-court tournament in Montreal soon after. He leads the ATP Tour in match wins since June.

Medvedev likened the way Kyrgios played Sunday to the level regularly reached by Rafael Nadal, who owns 22 Grand Slam titles and plays his fourth-round match Monday against American Frances Tiafoe, and Djokovic, who has 21 majors but is not at the U.S. Open because he is not vaccinated against COVID-19 and so was not allowed to travel to the United States.

“Didn’t miss a lot. Didn’t really surprise me,” Medvedev said. “If he plays like this ’til end of the tournament, he has all the chances to win it.”

Wouldn’t that be something?

Kyrgios is still Kyrgios during the course of a match, and was again on this evening.

Unsure of the relevant rule, he lost a point by running around the net to hit a ball that was going to land way out, then celebrated what he thought was a terrific play by raising a finger to make an “I’m No. 1” gesture.

During his on-court interview, Kyrgios sheepishly told the crowd: “I still can’t believe the bonehead play I made over here. I thought it was legal. That’s going to be all over ‘SportsCenter,’ so I’m going to like an idiot.”

He yelled at his guest box. He argued with the chair umpire and drew a warning for cursing. He smacked a ball in anger that ricocheted off a blue wall behind a baseline, coming close to flying over and landing amid spectators.

Medvedev, meanwhile, had been playing well enough to win all nine sets he played in Week 1 and look ready to give himself a shot at becoming the first man to win consecutive trophies in New York since Roger Federer grabbed the last of his five in a row from 2004-08.

But the 26-year-old Russian said he was bothered by a sore throat and generally “felt a little bit sick,” which he attributed to too-powerful air conditioning in the U.S. that he finds “just crazy.”

Now Medvedev — whose victory over Djokovic in the 2021 U.S. Open final ended his bid for the first calendar-year Grand Slam in men’s tennis since 1969 — will relinquish the top ranking. Three players have a chance to replace him there: Nadal, Carlos Alcaraz and Casper Ruud.

“I feel like tonight was another message that rankings don’t matter,” said Kyrgios, who will meet No. 27 seed Karen Khachanov for a spot in the semifinals.

Kyrgios has said that had he won Wimbledon, he might not have shown up at the U.S. Open at all. If he managed to win a Grand Slam title, he figured, the motivation to earn one would dissipate.

Right before this tournament began, Kyrgios sat down with a small group of reporters and talked about missing home — his brother recently had a child; his mother was ill — and how much he can’t wait to return to Australia after months away. So his first-round match would be a “win-win,” he said: “If I win, it’s more money and another great result. If I lose, I get to go home.”

On Sunday night, Kyrgios was asked whether he still thought that way.

“Three more matches, potentially, then we never have to play tennis again,” came the reply.

And then Kyrgios smiled a wide smile.